Get over yourself: how to conquer social anxiety fears

‘Shame attacking’ exercises include naked shopping and public sex. You don’t need to go that far 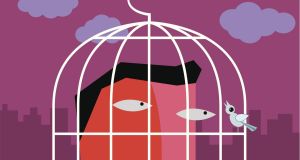 “Most shame-attacking exercises are just silly, and that’s the point of them . . . when nothing terrible happens, the person experiences less anxiety in facing the world in future.” Illustration: Hong Li/Getty Images

A young Italian woman recently drew a lot of attention in Bologna by going out to do her shopping without any clothes on. Naturally she was filmed on many people’s smartphones and the general reaction was amusement and bemusement. One observer wondered if she was conducting a social experiment.

She explained to the railway police, who got involved when she passed a train station, that she had gone out naked in order to conquer her fear of being seen by other people.

The police fined her €3,300 for acts contrary to public decency. I don’t know what happened next.

When I read about this I thought of Albert Ellis, the creator of rational emotive behaviour therapy (REBT) and his shame-attacking exercises, though REBT therapists do not, so far as I know, tell their clients to leave the house naked.

Ellis, who could be irascible and bombastic, is one of the giants of 20th-century counselling, with terrific ideas about how we limit ourselves through the unexamined assumptions we make. (Example: “There are three musts that hold us back: I must do well. You must treat me well. And the world must be easy.”)

Shame-attacking exercises are meant to convince us that we can put up with a lot more than we think and that the world isn’t all that concerned with us anyway.

This approach had its genesis in the 1920s, when Ellis, as a very shy young student, forced himself to approach 130 women in the botanical gardens in the Bronx. He reported that 30 women walked away as soon as he started talking, and that of the other 100, only one made a date with him – and stood him up.

His aim hadn’t really been to get dates but to conquer his anxiety about approaching women and he certainly succeeded in that regard. I doubt if his experiment would be safe to do today. His advice to a shy woman to chat up men at a bus stop would also not be safe today.

Most shame-attacking exercises are just silly, and that’s the point of them: shouting out the time in a department store, trying to buy cigarettes in a hardware shop, wearing funny clothes in public and so on.

When nothing terrible happens and the crowd just flows on by, the person experiences less anxiety in facing the world in future.

They included having sex in public, entering other people’s homes uninvited and lecturing them abrasively on philosophy, insulting prostitutes and breaking wind in company.

It strikes me that these were not nice people and that I’d rather read about them at a remove of a couple of millennia than spend five minutes in their company in real life.

If you suffer from social anxiety and you want to try out Ellis’s ideas, the key, I would suggest, is to find the least scary scary thing you can do.

For some people, that might be walking out the front door and then back in again and next time staying out for longer, it could be saying hello to a colleague you’ve never had the courage to address, or making a phone call instead of sending an email. Very small things, but to some an ordeal. When you’re okay with the small things you can move on to bigger and better.

I hope the Italian lady, the “nudista urbana” as the media called her, got what she wanted and conquered her shyness about being seen. I hope she didn’t get hounded or harassed and that she now feels entirely confident about going out in public – with her clothes on.

There were probably easier, and legal, ways for her to conquer her fears and I don’t recommend emulating her strategy, even in our diverse society.

Padraig O’Morain (pomorain@yahoo. com) is accredited by the Irish Association for Counselling and Psychotherapy. His latest book is Mindfulness for Worriers. His daily mindfulness reminder is free by email. Twitter: @PadraigOMorain