The highs and lows of energy drinks 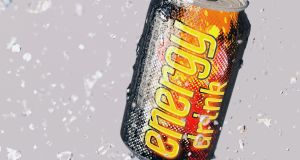 ‘Most individuals don’t consider the high levels of caffeine, sugar and calories that a drink can contain’

In 2015, the Global Burden of Diseases Nutrition and Chronic Diseases Expert Group estimated that worldwide there are 184,000 deaths a year from sugar-sweetened beverages (SSBs) consumption.

In June 2017, a review in Nutrients journal stated: “Chronic overconsumption of SSBs is among the dietary factors most consistently found to be associated with obesity, Type 2 diabetes and cardiovascular disease risk in large epidemiological studies.”

This was followed 11 days later the Journal of Insulin Resistance, which stated that “added sugars drive chronic kidney disease and its consequences”, according to a comprehensive review. “Much of the increase in the intake of added sugars has come in the form of SSBs,” it suggested.

Energy drinks are non-alcoholic, caffeine-enriched SSBs marketed as stimulants to raise energy and performance. In Ireland, their marketing is largely unregulated. Caffeine-related health risks of energy drinks include palpitations, diabetes and convulsions.

With a survey by Empathy Research in 2015 showing that 35 per cent of male and 22 per cent of female consumers, respectively, buy energy drinks at least once a month, a 2016 review of energy drinks in Ireland by Safefood, the North/South Food Safety Promotion Board, reported that among adolescents and young adults, energy drinks are associated with sensation seeking, use of tobacco and other substances, increased risk of depression and injuries needing medical attention.

Mixing energy drinks with alcohol is linked to high-speed driving, unprotected sex and binge-drinking. Safefood’s review noted: “Anecdotal feedback from A&E departments in Ireland report that there is an issue with energy drink overconsumption, particularly in conjunction with alcohol intake and risk-seeking behaviour.”

And with 25 per cent and 66 per cent of children and adults, respectively, in Ireland, either overweight or obese, the recent publication of a study entitled “Energy drinks available in Ireland: a description of caffeine and sugar content”, in Public Health Nutrition, is timely.

Lead author Ms Laura Keaver, a registered dietitian and lecturer in nutrition and dietetics at Sligo Institute of Technology, told The Irish Times that all of the 78 energy drinks sold throughout Ireland meet the EU definition of a highly caffeinated product, which is containing more than 150mg of caffeine per litre.

She said that in some cases they contain “twice this amount. Serving sizes ranged from 250ml to 500ml, and the caffeine content of the 78 energy drinks available ranged from 35mg to 160mg per serving. For comparison,” Keaver added, “200ml of filtered coffee contains approximately 90mg of caffeine and 200ml of black tea approximately 50mg.”

Should there be recommended caffeine limits for children and adolescents?

“The difficulty with establishing a guideline caffeine limit to date,” Keaver explains, “is that we use data based on adults and extrapolated to children according to body size. So despite concerns about the health effects of consuming high quantities of caffeine in children and adolescents, we don’t have age-specific data for this group for ethical reasons.”

Keaver adds that other dietary sources, such as tea and coffee, provide caffeine. “We should aim to reduce additional intakes of caffeine in children and adolescents by restricting availability and access to highly caffeinated products such as energy drinks to under-16s. It’s also important to ensure consistent labelling across products, with labels stating ‘not suitable for children and young adolescents’ clearly visible on the front of the product, not the back.”

The average energy drink surveyed  equated to 7.5 per cent of the total daily energy intake for the average adult

Keaver’s team found that sugar-containing energy drinks had an average of 37g of sugar per serving, equivalent to nine teaspoons of sugar, with some drinks containing up to 78g sugar per serving, equivalent to almost 20 teaspoons of sugar.  “In Ireland,” she explains, “SSBs contribute approximately 5 per cent of total energy intake in children’s diet.

“The WHO recommends that free sugars contribute no more than 10 per cent of total energy to the diet, with a further reduction to below 5 per cent providing additional health benefits. The average energy drink surveyed here equated to 7·5 per cent of the total daily energy intake for the average adult.”

Should SSBs be taxed?

The Government’s forthcoming legislation is a prudent public health step, with a recent Australian study in the journal Health Policy concluding: “An additional 20 per cent tax on SSBs not only improves health outcomes and reduces healthcare costs, but provides productivity gains in both the paid and unpaid sectors of the economy.”

“Many factors, individual and environmental, cause obesity, and no single intervention will reduce its high prevalence across all age groups. Taxing sugar is a step on the journey, but must be accompanied by additional actions to arrest rising rates and their associated health costs.”

“It’s difficult to predict,” says Keaver, “how the sugar tax will affect obesity levels, but I expect fewer SSBs will be bought – as seen in other countries like Mexico where the tax has been introduced – and more products re-formulated to reduce sugar levels.”

Most individuals don’t consider the high levels of caffeine, sugar and calories that a drink can contain

An SSB tax should also reduce the 2.4-fold increase in dental erosion, which Keaver and colleagues note is associated with energy drink consumption, and is highly prevalent among young children.

Although we’re responsible for our own health, government has a responsibility to promote public health and Keaver is adamant that clear messages are needed to avoid confusion.

“Most individuals don’t consider the high levels of caffeine, sugar and calories that a drink can contain.”

Providing information in an easily understandable format is important and could help shape purchasing choices. Food manufacturers will only change their products if legislation or demand deems it necessary. It’s important to focus on both sides of this to get the maximum effect.

“However,” she adds, “we shouldn’t over-focus on or demonise one nutrient such as sugar. We consume foods, not individual nutrients, so overall dietary intake is important.”

Nutrition science is in flux, with expert opinion divided on what constitutes best dietary practice. It’s clear, however, despite food industry protestations, that caffeine- and sugar-laden energy drinks produce potentially adverse health effects. A government should provide a public health service, and an SSB tax will improve public health.