Are men not fed up being the family bread winners?

Constitutional protection for housework, by men or women, is farcical, writes Jacky Jones 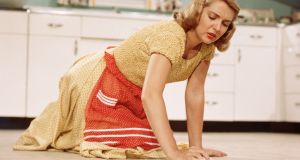 A woman’s place? A recent poll showed only 40% of women were in favour of repealing article 42.1 of the Constitution, which deals with the role of mothers in the home. Photograph: Getty Images

Irish attitudes to women’s rights and roles are often baffling. Article 41.2 of the Constitution is particularly misogynistic and offensive.

It says that “by her life within the home, woman gives to the State a support without which the common good cannot be achieved”, and that “the State shall, therefore, endeavour to ensure that mothers shall not be obliged by economic necessity to engage in labour to the neglect of their duties in the home”.

An opinion poll commissioned by the Sunday Times found that a referendum on removing this article might fail. Just 41 per cent of respondents would vote in favour of removing it, while 39 per cent would vote against repealing it. A fifth did not know how they would vote. Slightly more men (42 per cent) would support its removal than women (40 per cent).

What is going on? Are women afraid they might have to get a real job? Are men not fed up being family breadwinners?

Article 41.2 has been criticised by many national and international organisations. In 2013 a huge majority of members of the Convention on the Constitution (88 per cent) voted in favour of amending it, and 98 per cent voted to make it gender neutral and include other carers “in the home” and “beyond the home”.

In March this year the committee monitoring the United Nations Convention on the elimination of all forms of discrimination against women found that “article 41.2 perpetuates stereotypical views on the social roles and responsibilities of women and men in the family and in society at large”. It urged the Government to remove or amend the article as soon as possible.

Apart from child-rearing – which is an important job that should be shared equally by both parents with State support – home duties mean housework: cleaning, laundry, bed-making, cooking, shopping and all the other things people need to do to have healthy lives.

When the Constitution was written article 41.2 was inserted to ensure that men would be fed, watered, provided with clean clothes and do their day’s work without having to take personal responsibility for food or hygiene.

Having a woman – and it is mostly women who carry out home duties (Census 2016 shows that 282,468 women listed their principal economic status as “looking after home and family” compared with 20,566 men) – to play this role is a huge advantage to anyone working outside the home.

Homes are important places, but one person does not need to be in charge of home duties. There is convincing evidence that the healthiest families are those who favour autonomy and openness of all members to the outside world. Less healthy families limit interaction and reinforce dependence.

This dependence is much more likely to develop if one person – usually the mother – looks after everything than when all family members are engaged in activities outside the home, such as education, work, leisure, sport and community activities, including politics.

Home duties, no matter who is involved – men, women or carers – should not be given constitutional protection. All able-bodied people should do their own housework, or share it equally with others who live in the family home.

Children are able to clean up after themselves from the age of five onwards.

People with disabilities may need home supports, including personal assistance, to enable them to live independently. This is covered by the United Nations Convention on the Rights of Persons with Disability which Ireland signed 10 years ago but has still not ratified. In fact, carers are not mentioned anywhere in the convention. Ratifying the convention will ensure that people with disabilities get whatever supports they need.

The Irish Human Rights and Equality Commission and the National Women’s Council have asked the Government for a timeline within which a referendum on the role of women in the home will be held. This has at last been done.

Action 3.1 in the National Strategy for Women and Girls: Creating a Better Society for All (2017) pledges to “hold a referendum on article 41.2 of the Constitution regarding a woman’s life within the home by 2020”.

Gender equality will be needed before any referendum takes place

Given the Sunday Times poll result, an education campaign on the meaning of, and necessity for, gender equality will be needed before any referendum takes place.

Providing constitutional protection for caring and housework is farcical. Having nearly a third of a million citizens at home doing housework is a complete waste of talent. Article 41.2 must go, and the sooner the better.

What is the going rate for a home in...Co Kerry?
4

Tell Me About It: I hate that my girlfriend is friends with her ex-lovers
7

Tell Me About It: I have no feelings for my wife any more
9

So you think you hate moussaka? Try the Ottolenghi version
Real news has value SUBSCRIBE