My 30 hours on a trolley: There aren’t enough nurses, beds, chairs or communication 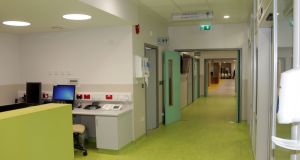 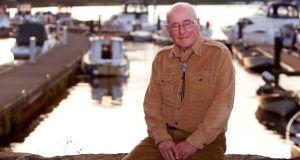 David Rice: Why is there almost no official communication with patients? Photograph: Charlie McGeever

I was carted off recently screaming and kicking to the emergency department of University Hospital Limerick, where I was popped on to a trolley and wheeled up against a wall, there to remain for 30 hours. Well, actually it was the ambulance that was screaming and myself that was kicking, in anticipation of what was to come.

However, when I realised I wasn’t going to die, I began to sit up and take notice. I got down off the trolley and started meandering about, still fully dressed. Nobody seemed to mind, as everyone was too busy to notice.

After a while, I pulled out my notebook and pen, and started to take surreptitious notes, eavesdropping on snippets of conversation wherever possible.

First impressions are of utter chaos. Bells clanging; gongs booming like a forever Angelus; things screeching; other things buzzing; phones beeping; ambulances braying beyond the windows. Names called out, and repeated over and over, as patients are sought amid the chaos, under blazing lights that never dim.

People scurrying here and there like ants in an anthill. Trolleys, filled with prostrate bodies of every age, gender and background, lining every wall, with other trolleys trying to squeeze between them – like trying to negotiate a narrow street with cars illegally parked on either side. And more trolleys rolling in all the time.

The seeming chaos appeared to get worse as the night wore on, and more and more trolleys clattered into the emergency department. I overheard someone say the count had reached 90.

My trolley had to be moved five times during the night, at one time being parked across the door to some room, having to be shifted every time someone needed to get through the door.

Let me not suggest I was neglected during those 30 hours. Far from it. Several times my chest was checked with a stethoscope; I was taken off to be X-rayed; my bloods were taken; and I had electrodes stuck all over me that make wiggly lines on a screen. And at midnight I got soup and a sandwich. The only thing was, I was on a trolley, rather than in a bed; in a corridor, rather than in a ward.

I asked a nurse why there was such congestion. Because there aren’t enough beds, she said.

But why not enough beds?

Because there aren’t enough nurses to staff them.

Why aren’t there enough nurses?

Because most of them emigrate.

Why do they emigrate?

Because they’re not paid enough here. In Australia, for example, a nurse can earn in two days what she earns here in a week.

Why aren’t they paid enough here?

Better ask the Government that one.

Another nurse added: “If we could get rid of all those levels of administrators, who spend most of their time administering each other, or even going off on courses when they have nothing else to do, their enormous salaries might pay for a few more nurses and doctors.”

After a while I realised I wasn’t quite looking at chaos. In fact I was looking a group of truly wonderful people coping with well-nigh impossible numbers, yet coping, and coping extraordinarily well. And coping in a facility that had been opened just two days earlier, for this was the brand-new wing of the hospital. Teething problem, I guess, were to be expected.

Having the leisure of a patient, and being right in the thick of things – in a corridor rather than in a ward – I began to notice things I might not otherwise have been aware of. Things such as the gait of people.

The various personnel all have different gaits, according to their role. The nurses have a rapid, urgent, purposeful walk, always hurrying somewhere. Then there’s the despairing plodding gait of a relative trying to find a loved one.

Consultants have a dignified sauntering gait, as they survey their territory, followed by the requisite coterie of minions.

The big, burly, bearded porters, wheeling in the trolleys, tread slowly but determinedly, as if they would brook no traffic jam. Nor do they. Very young doctors sort of stride by, conscious of their importance to the scene, and particularly conscious of the stethoscope around their necks.

Indeed I realised for the first time that that was how doctors identify themselves. Sociologically speaking the stethoscope has two functions – the manifest function being to check chests, and the latent function to tell folks I’m a doctor.

But always, in spite of all that hurrying, striding, sauntering and scurrying, there was this pervading sense of caring and compassion, which in the end was what mattered most.

At one point I spotted a Suit Without a Stethoscope advancing with stately stride and gazing with detachment upon the throng around him. I guessed I was witnessing Admin in action. And Admin was the one function that did not altogether impress. But then it must be remembered that this new wing had only been opened for two days, so of course there would be teething problems.

However, had I had a chance to speak to one of these admin folk, I might have asked the following:

Why is there no wifi? Why aren’t there enough chairs? I encountered several patients having to stand for hours, one in acute back pain. One woman told me she was afraid to go to the loo in case she lost her chair. Finally she did go, and did lose it – the chair, I mean.

Why are there no screens to let people know how long are the queues, and even approximately how long they might have to wait? Like at an airport. (That screen in the foyer is hardly enough, and says nothing worthwhile anyhow.)

Why is there almost no official communication with the patients? You cannot expect the nurses, already run off their feet, to have an overall view of things. They suffer just as much as the patients from this lack of communication. A few loudspeakers wouldn’t cost that much.

Then I realised that there were indeed loudspeakers, when one boomed out a command to move a car wrongly parked outside. Perhaps they might be better used to comfort the afflicted, inside.

Perhaps the directors of some urban railway station could be co-opted to take over the administration of hospital emergency departments. The two situations are remarkably similar.

Except that the trains run on time.

Trying to sum up my impressions, I came up with what I called the “Four Cs” of the emergency department – care, compassion, cleanliness, and cheerfulness.

First there were care and compassion. I saw anguished people being comforted – “You’ll be all right love, there’s nothing to be worried about. We’ll get you through all this” (to a terrified and weeping old lady); “That pain will be gone in five minutes, Séan” (as an injection is given to a young fellow with face screwed up in agony); “Now, isn’t that better? You’re doing grand!” (to a young woman thumbing a mobile phone).

It wasn’t only trolleys that had to squeeze through the traffic. Huge cleaning chariots, big as the trolleys, with mop handles sticking up like antennae, manoeuvred back and forward, pushed or pulled by people in overalls and plastic hair covers. I noticed a big plastic bag attached to one of them, marked Mop heads.

And lastly, cheerfulness. In all my 30 hours on the trolley I never once heard a voice raised in anger. Everywhere there was patience, gentleness and occasional humour, in circumstances that ought to have sent anyone round the bend.

David Rice directs the Killaloe Hedge-School of Writing. His nine books include “Shattered Vows”, “Song of Tiananmen Square” and “The Pompeii Syndrome”. His new writing guide, “Yes, You can Write”, is due out later this year. davidrice@killaloe.ie