How to train your baby (and yourself) to sleep better 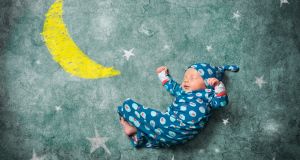 After five months of the new baby waking every hour to feed, it was taking its toll on me, my family and the little man himself, says Mimi Murray

Sleep deprivation is one of the most effective forms of torture, according to the CIA. As a beleaguered, second-time mother with a baby who didn’t sleep, I can fully attest to this and I am sure most parents can relate to it, too. I know that I would have signed any confession put in front of me in a bid to get eight hours straight.

Everyday jobs that I could normally carry out with ease, and sometimes flair, such as cook a meal, drive a car, make a cup of tea or think of my last name, had turned into a colossal, often daunting task, on little or no sleep.

After Jacob was born last December, I anticipated the usual feelings of exhaustion, but after five months of the new baby waking every hour to feed, it was taking its toll on me, my family and the little man himself. Tempers flared easily, nerves were frayed and we were all like walking zombies.

It was then that, through a friend, I heard about a sleep coach. Enter Berit Andersen, a qualified social worker who previously worked at the Coombe hospital in Dublin and is now based in Copenhagen. She has devised a programme to help babies sleep after her own daughter fell into a “terrible” pattern when she was six months old.

Andersen’s technique involves a very strict routine, including consistent eating and sleeping times as well as the child being “filled up” by the parent throughout the day. This is one of the key areas where Andersen differs from other sleep trainers.

Andersen believes that if children, and adults, go to sleep at same time every day, there is huge advantage to this. Things such as daylight seeping into a room and the time of meal s are all examined as part of the programme.

But at the heart of anything child-related is attachment, according to Andersen. “Children will stay awake to get as much out of the parents as they can, to make sure they are getting that quality time.”

Our personal programme began with a Skype consultation with Andersen. Following this we filled out daily routine charts that included all of his sleeping and eating habits, which Anderson examined at the end of each day. This gave her a better understanding of the schedule we needed to put in place for Jacob.

We also made a short video of my interaction with Jacob, either at play, or during his bedtime routine, so that Andersen could see any areas where he might be “filled up” more. This aspect of the sleep training has its foundations in Marte Meo, which was devised by Dutch therapist Maria Aarts in the 1980s and has ben successfully used in the decades since.

Translated from Latin, Marte Meo means “On one’s own strengths” and looks to build on the good communication skills that parents already have and use. The approach uses interaction analysis to identify the parent or caregivers strengths.

Andersen explains how it works: “A very short film is taken of mum and baby (My husband took ours on his phone) and I go through it second by second and see what the child is looking for and how the parent is responding. All parents do lots of things right and some things wrong, but with Marte Meo we focus on the child getting the right response from the parent seven times out of 10.”

Self-consciousness kicked in and I found it tricky to be myself with Jacob while being filmed, but after a couple of attempts, we had something she could work with. She was able to point out the things I was doing in order to support Jacob’s development and encouraged me to do more of this.

The programme takes three weeks and requires a huge commitment. It’s a stipulation that all naps are taken in the cot, so we couldn’t take a stroll in the buggy, for fear he might nod off. This is so that a good routine is established and positive sleep associations with the cot become ingrained.

I was still breastfeeding when we started and Andersen was very supportive of this, but I wanted to move towards giving more bottles, which she worked into the schedule.

There were times when Jacob would roll over and go straight to sleep, from day two of the routine being implemented. But he also cried and at those times Andersen recommended that I become an “anchor” for Jacob. I should go in and place a firm hand on his chest or back and stay present while he let off steam.

In terms of the controversial cry-it-out method, which often divides opinion, Andersen says she personally does not recommend it or encourage it as she “knows there is another way”. However, she concedes that if it comes to a choice between that and a child getting no sleep, the former is preferable.

“A child needs undisturbed sleep after the six-month mark for a number of hours in a row; it’s detrimental to development and physical growth if they don’t get enough, so it may be better in the long run. However, I just think, if something looks traumatic, it usually is. There is another way to do it.”

Daily phone conversations with Andersen are included in the programme and this level of support is invaluable. On any given day I was prepared to ditch the entire process and lapse back into old habits because old habits are comfortable, even if they’re harder in the long run. But Andersen was there to pull me back from the abyss and talk me through each wobble.

In terms of sleeping through the night, Anderson says parents should be realistic about what they expect from a baby, and sometimes positive change is what they should strive for.

“Sleeping five to six hours is sleeping through the night for a small baby, you wouldn’t really expect more than that before five to six months. It’s a very rare thing, sleeping 7 to 7 at a few months old and there is often a nutritional need to wake up and get some food, but it’s about then moving back into sleep relatively easily”.

When the three weeks came to an end, Jacob was waking twice a night, a miracle in my eyes compared to the previous hourly waking. This consolidated over the next few weeks and at seven months old, he wakes once at night and usually gets between 11 and 12 hours sleep.

The programme cost €300 but it was money well spent. The loss of my sanity would have been a much greater price to pay.

Sleeping tips: for baby not for you!

Complete darkness is required for both naps and the night time sleep, especially in summer, as even a small amount of light, as much as comes from a baby monitor, can be a distraction. For this reason, black out blinds are a must.

A soother is not blacklisted but Andersen encourages parents to use a “blankie” or soft cuddly toy instead, which not only provides comfort but baby can suck on it and get it into his mouth if he wakes in the middle of the night.

She encourages holding this while baby is feeding so he can develop an attachment to it. There are many items that are marked as safe from birth.

Breakfast should be given in a bright, naturally well-lit area of the house in order to reset the body clock.

In order to “fill baby up”, mum or dad should talk to their little one as much as possible, explaining what they are doing. “I’m going to change your nappy now.” “Look at you kicking your little legs.” “Are you putting your little toes in your mouth.” This helps create positive attachments.

A good bedtime routine is paramount. It can be as simple as bath or hands and face wash, a story and bottle/breast before bed.

Laughter is encouraged before bed, something parents might find counterintuitive, preferring their babies to “wind down” before sleep. But it helps to create one more positive attachment just before bed.