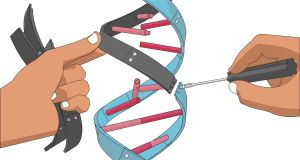 The idea behind gene therapy sounds simple – a person is born with a version of a gene that causes a disease, so you deliver a new gene to resolve the issue.

But the path to getting gene therapies working in humans has required decades of research to understand the particular genes needed and how best to deliver the genes into the body, often using modified viruses as carriers or “vectors”. That research is now starting to bear early fruit for some patients with rare conditions such as haemophilia and inherited blindness.

It’s an exciting time for the field, according to US-based Dr John Murphy, who is vice-president, biology, at Pfizer’s rare disease research unit.

He was in Ireland last week to speak at the BioPharma Ambition event about gene therapy, where it’s going and what we are learning along the way. “The technology, we feel, has reached a point where you can impact disease,” he says.

One condition where gene therapy has made a recent splash is haemophilia B, a rare genetic disorder where the function of a clotting factor called Factor IX is disrupted. This means people with the condition can bleed for longer, and in severe cases that can cause internal damage.

Late last year, the results of a gene therapy study for haemophilia B delivered promising results: A group of 10 men with the condition received an infusion of a “new” Factor IX gene and most of the participants had no bleeding attacks in the space of a year or more.

The study, published in the New England Journal of Medicine, was supported by Pfizer and US company Spark Therapeutics. “All the patients treated [in the study] have responded, and most of them are not bleeding at all,” says Murphy.

Haemophilia B gene therapy has been widely researched and getting the measure of it has taken some time, he notes, but advances in understanding how the immune system responds to the therapy and the ability to target the gene more specifically in the body have helped.

“We don’t know how long the effects will last, but these treatments are durable and one injection lasts for as long as anyone has looked so far,” says Murphy of the trial. “There is the potential for people who have a rare disease to live their life as if they don’t have rare disease, in terms of not having to think about taking medicine.”

Spark Therapeutics also has an interest in gene therapy for inherited forms of blindness, and in early 2016 the company acquired gene technology to target retinal disease that was developed at Trinity College Dublin.

That research in Trinity was started in the 1980s by the patient group Fighting Blindness Ireland, and led to the discovery of key genes involved in retinitis pigmentosa or RP, a rare inherited form of progressive blindness.

Prof Jane Farrar, Prof Pete Humphries and colleagues researched the genes and developed a system to “rescue” their function with gene therapy. The technology was acquired by Spark in the United States.

“Spark Therapeutics recently achieved a hugely significant milestone in the field – the company recently got FDA approval for a gene therapy, Luxturna, for another eye disease which is the first of its kind,” says Farrar.

Overall, our understanding of gene therapy has grown in the last 10 to 15 years, says Farrar. “Because these gene therapies are rationally designed to target a specific inherited problem, they have the potential to have a powerful effect,” she says. “And we have learned a lot about the best ways to design and manufacture gene therapies to optimise them, and about how the body responds to them.”

For University College Dublin researcher Dr Lara Cutlar, the target is a rare condition called epidermolysis bullosa or EB, where the the skin blisters and peels off easily.

EB hit the headlines recently when it was revealed that a boy with the condition had been successfully treated by genetically altering his skin cells in the lab and growing them up to be attached back onto him.

“I was at a conference in Austria when that work was presented to the top experts in EB, and everyone in the room went quiet, people were blown away,” recalls Cutlar.

Working with Prof Wenxin Wang in UCD, she is developing a more generic type of gene therapy for a form of EB called recessive dystrophic epidermolysis bullosa, where the body cannot make enough of a protein called collagen VII to anchor skin layers in place.

The research, which has been funded by Science Foundation Ireland and Debra Ireland, uses a specially designed molecule to carry genes into the skin and allow the body to make collagen VII to secure layers of skin.

“We are using a polymer-based gel that can hold on to the collagen genes and get them to where they are needed,” explains Cutlar. “We have done extensive laboratory studies are now at the stage of looking at how to scale up the [molecule] and produce them in larger amounts for trials.”

While some forms of gene therapy are closer to being available than others, for Cutlar, Farrar and Murphy, the ultimate drive of their research is to help patients. “This is really an exciting time,” says Murphy. “And it’s nice to work in something where you can see the obvious impact of what you are doing.”

– Rare diseases affect at least 6 per cent of the population in Europe.
– In Ireland, it is thought that at least 300,000 people have rare conditions.
– World Rare Disease Day takes place on February 28th.