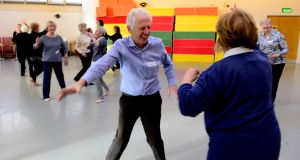 Loneliness is often described as being more detrimental to older people’s health than physical illness. But not every older person wants to play bridge, bingo or bowls. So now, in some parts of Ireland, dance classes are becoming a sociable way to keep mentally and physically agile for people in their 60s, 70s and 80s.

The Well Dance for Seniors contemporary dance classes run by the Dance Theatre of Ireland is a good example of this phenomenon.

On a visit to a Tuesday morning class in the Dance Theatre of Ireland studios, Bloomfields Centre, Dún Laoghaire, we were seduced by their enthusiasm. Dancing across the floor in their bare or stocking feet, about 25 people aged between 60 and 85 keep a steady rhythm to pop, classical or jazz music as they wave their arms, swagger their hips and roll their shoulders. But, mostly they just laugh and smile, making eye contact with other participants as they go.

Loretta Yurick and Robert O’Connor are the artistic directors of Dance Theatre of Ireland and they have had about 500 older people come to these contemporary dance classes since they started in 2014.

“These are seniors who have lost a spouse, may have cancer, heart disease, arthritis or other neurological diseases . . . but in dancing they have found a new love in their life and an outlet for expressing their insights,” says Yurick.

Several members of the dance class are keen to speak about why they come for these 90 minute classes every week. “I’ve Parkinson’s and I find the classes lift my spirits and energize. The camaraderie is wonderful,” says Elizabeth (76) who has been coming to the classes for two years now.

Bill Roe (74), one of the few men in the group, explains how coming to the classes have brought joy back into his life since his wife died nine years ago. “I used to go to the gym but then I injured myself. I discovered the Well Dance for Seniors classes and find it’s a wonderful way to get fit. There are opportunities to stretch and balance and use your memory [learning the routines]. It’s the nearest activity I’ve found that brings back the energy and joy of youth. I just want to encourage more men to join,” says Roe who has also performed in Vintage Youth, a dance piece choreographed by Yurick with members of the Well Dance for Seniors classes.

Audrey O’Carroll, who has also performed in Vintage Youth, says she feels rejuvenated after the dance classes. “It’s a great mind/body workout. The energy levels last for hours afterwards. I feel very light and free and I love being treated as an active older person. So often, retirement is seen as a time of decline and slowing down and dance goes against that idea,” she says.

O’Carroll first came to the dance classes as part of a research project, led by the School of Occupational Therapy at Trinity College Dublin. The study involved 20 weeks of dance classes in Dún Laoghaire, Shankill and Dundrum. Researchers found that participants in the dance class said they had better physical abilities and emotional /psychological well-being as well as increasing their levels of participation in activities following the dance classes.

Anne Dallaghan (77) explains how she tried yoga, Tai Chi and other health exercises aimed at older people before she found these dance classes. “They were all good enough but I lost my beautiful son last year and these dance classes have brought me joy and happiness and have helped me cope with my bereavement,” she explains.

Lynn McCutcheon (65) has also found that the dance classes help her cope following the death of both her parents within three weeks of each other two years ago. “I was so exhausted when they died. I shut down and couldn’t do anything but about a year after they died, I found these classes. Robert and Loretta are excellent teachers – they bring out what is inside of us all. I love the music and the acceptance and lack of judgment in the classes. We’ve all had to face things in life and there is a lot of compassion and understanding in the group.”

Annie Holbrook (66) joined the Well Dance for Seniors classes following the unexpected death of her husband. “My body said to me ‘I want to dance’. I thought that was almost indecent but it really is therapeutic. I never saw positive ageing in action until I came to these classes. I’m an exercise atheist but I’ve always danced wherever I am and when I leave these classes, I walk like a dancer.”

Eilish Fitzpatrick travels to the classes in Dún Laoghaire from Clontarf every Tuesday morning. “I was never a dancer and I’ve always had a weight problem but I find these classes are so freeing. I can move and I don’t feel any restriction because of my weight. It’s a very safe place and we don’t feel inhibited when we move. Often people who hold classes for older people are very cautious but we need the joy of music and movement.”

Rather than feel tired after the mix of exercises and dance routines, the participants in the Well Dance for Seniors say they have more energy than usual. Dorothy Murray (84) says, “I feel six feet tall when I come out of the class. And I get great tips on how to maintain my balance from the classes.”

Yurick says that the aim of the Well Dance for Seniors classes is to encourage people “to connect with who they are”. She says, “every single person can dance and it’s about making it accessible to everyone, making people feel at home and welcomed in the classes with a sense of humour, openness and non-judgement”.

She adds, “It’s remarkable to see how people grow in the classes despite everything else that is going on in the world and in their lives and the lives of those we love.”

Yurick and O’Connor trained in contemporary dance style known as German expressionism. “It started with May Wigman and Hanya Hom and we trained at the Nancy Hauser school in Minneapolis, Minnesota. We were trained without mirrors because it’s about the movement coming from within,” explains Yurick. Originally working from the Digges Lane Dance Studio in Dublin city centre, O’Connor and Yurick have been based in the Blooomfields Centre, Dún Laoghaire since 2000. Their work is supported by the Arts Council, Dún Laoghaire Rathdown County Council, the HSE and the Ireland Funds.

Specialist Dance Classes help those with Parkinson’s Disease and Dementia

“Once you start a dance class, you really feel the flow of movement and the rhythm of the music helps get your body get back in synch.” So says Mags Mullarney from Move4Parkinsons, the innovative charity which supports people with Parkinson’s Disease with dance classes, choirs and much more.

Mullarney, who has Parkinson’s for the past 14 years, started contemporary dance classes for people with Parkinson’s in Ireland following a meeting with American dance teacher, David Leventhal, at the World Parkinson’s Congress in Montreal in 2013.

“People with Parkinson’s have different symptoms like freezing gait and tremor and dancing helps these symptoms a lot. It’s important to have dance teachers who empathise and are adaptable with participants,” says Mullarney. Many of the dance activities are done sitting down and with family members, friends and volunteers joining in. “People often come to the classes feeling tired and sorry for themselves but they leave feeling energised and happy. The social interaction is hugely important,” adds Mullarney.

Dancing Well with Dementia is another series of specialised dance classes in South Dublin “The dance classes for people with dementia and their partners are often the only time that the couple is back being husband and wife,” explains Joan Fitzpatrick, occupational therapist and dementia development officer in South Dublin. Dance Theatre of Ireland artistic director, Robert O’Connor, runs the classes as part of the HSE Living Well With Dementia project in South Dublin.

According to Fitzpatrick, the dance classes give people with dementia confidence, self-expression and a sense of relaxation. “They come into the classes looking negative and they come out with a smile on their faces,” she says. The classes begin with everyone sitting and then progress to standing and dance movements, often encouraged through the use of imagery and visualisations. “A diagnosis of dementia brings a lot of focus to what people can’t do but dance is a positive physical and social interaction that people can do and there has been a lot of research into the positive impacts on the brain,” says Fitzpatrick.

Jimmy Gralton, the only Irishman ever deported from Ireland
8

Paul Flynn: ‘I still have all my old menus. One dish stands out: bang bang chicken’
9