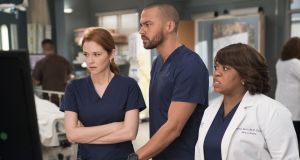 The popular series, based around a team of surgeons working in Seattle in the US, may give viewers a “false expectation” about the care they would receive following trauma, researchers said.

The US researchers examined fictional patients in the show and compared them with the experiences of almost 5,000 genuine patients, whose data were collated on the American 2012 National Trauma Databank.

The study, published in the journal Trauma Surgery And Acute Care Open, compared the portrayal of trauma sustained by 290 fictional patients in 269 episodes of Grey’s Anatomy with real-life injuries sustained by 4,812 patients.

Almost a quarter of real patients (22 per cent) were transferred to a long-term care facility compared with just 6 per cent in the series. The death rate was three times higher in Grey’s Anatomy than in real life – with 22 per cent of patients dying compared to 7 per cent of real trauma patients.

Season 14 of the medical drama is currently being broadcast in Ireland.“The balancing act between the presentation of the realistic and the dramatic can actually result in a skewed perception of reality among television viewers,” the authors wrote.

They describe how the previous work has found that portrayal of reality on television ultimately shapes the viewer’s perception of social reality in real life.

And “divergence of patient expectations from reality may, in fact, contribute to lower levels of satisfaction”, they added. “In the present study, we have demonstrated how the representation of trauma patients on television dramas differs from reality, particularly with respect to recovery after injury.

“It follows that patients’ expectations after injury may be distorted by this unrealistic depiction of injury on television. Television portrayal of rapid functional recovery after major injury may cultivate false expectations among patients and their families.” – PA