Actor with Down syndrome plays lead in off-Broadway production

‘Finding a talented actor with Down syndrome isn’t difficult. So please do it’ 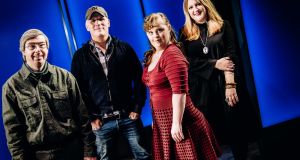 Near the end of 2015, playwright Lindsey Ferrentino and actress Jamie Brewer were watching clips of Donald Trump, then a candidate to be the next US president, appearing to mock a reporter with a physical disability.

They were horrified – which made their work on a new play, centered on a character with Down syndrome, all the more significant.

“From that point forward, the play took on a new meaning for me,” Ferrentino said.

“Watching you watch that video, seeing your reaction to it, you cried,” Ferrentino said, turning to her.

“I was emotional,” Brewer said.

The play, Amy and the Orphans, which opened early March in a Roundabout Theater Company production at the Laura Pels Theater in New York, is a barrier-breaking show. Brewer, (33), and her understudy Edward Barbanell, (40), are thought to be the only known performers with Down syndrome to play the lead in an off-Broadway or Broadway theater production.

The show is about three siblings who reunite after their father’s death, and the road trip that follows. Ferrentino, who debuted with the critically acclaimed play Ugly Lies the Bone in 2015, was insistent that the title role be played by someone with the disability, even leaving a note in an early draft of the script: “Finding a talented actor with Down syndrome isn’t difficult. So please do it.”

Brewer is a veteran actress best known for her groundbreaking work on the television series American Horror Story.

Barbanell, who goes by Eddie, played Billy in the 2005 movie The Ringer, starring Johnny Knoxville. He and Brewer have performed on stage for much of their lives.

But taking on such a large and high-profile theater role is a completely new challenge.

“The biggest hurdle is the amount of dialogue and stage direction that comes all at once,” said Gail Williamson, Brewer’s agent and a prominent advocate for performers with disabilities. “When you’re doing a television show or a film, you have a scene and you can work on that one scene. Doing theater, you have to have it all down.”

At the rehearsal space for the show, Brewer was going over lines with fellow cast members Debra Monk, Mark Blum and Vanessa Aspillaga. In the scene, Amy, wearing pink noise-canceling headphones as she watches a movie on her tablet, is visited by her two siblings, played by Monk and Blum. Aspillaga portrays a caretaker. Every few minutes, after a scene would start, the show’s veteran director, Scott Ellis, would interrupt to offer notes and tweak the blocking. Turn this way. Walk that way. React more.

The stops and starts were especially important for Brewer. The more repetition, the easier the memorization, and the more the scenes would be ingrained into her muscle memory.

“That was great, Jamie,” Ellis said. “Back it up one more time,”

Another stop, more direction and then repeat. Ellis kept offering words of encouragement to the cast, while Ferrentino sat nearby, taking notes on a notepad smaller than her hand. Occasionally, she would whisper to Ellis. Throughout the rehearsal, Brewer cracked jokes; nearby, Barbanell quietly observed.

The play is based on Amy Jacobs, Ferrentino’s aunt, who also had Down syndrome and is now deceased. When Ferrentino began writing the play, her process was complicated by the limits of her aunt’s verbal skills, which made creating dialogue a challenge. In 2015, she reached out to Williamson, whose entire client roster is made up of performers with disabilities. Williamson connected her with Brewer, who had just become the first person with Down syndrome to walk the runway at New York Fashion Week. The playwright and the actress met for coffee and hit it off immediately.

Brewer told Ferrentino that when she had played characters with Down syndrome, she often had to cater to an audience’s expectations, regardless of her abilities. Immediately, Ferrentino decided that the play would be as much about Brewer as about her aunt.

“That informed how I wrote the play,” she said. She wanted to give Brewer room “as an actor, and a person, a chance to step outside that role and show the audience who she actually is.”

Brewer, an only child, grew up in Orange County, California, before moving near Houston, where she was involved with a local theater. She said she started performing around eighth grade, with her family’s support.

“Individuals with disabilities have different ways of coping with things,” Brewer said. Her way, she explained, was plunging into the arts, like her character, who must handle her father’s death.

After the play was written, the task was to find Brewer’s understudy. Williamson connected Ferrentino with Barbanell, who was living in Coral Springs, Florida.

For their first meeting, Ferrentino told him not to prepare anything; she just wanted to meet him. But Barbanell, accompanied by his mother, was ready with scenes from A Midsummer Night’s Dream, Julius Caesar, Henry V and Romeo and Juliet. At a diner, he pushed his ice cream sundae aside and insisted on showing Ferrentino his skills.

“He performed the most beautiful, word-perfect Shakespeare,” Ferrentino said. And instead of finding another Amy, Ferrentino and Ellis decided that Barbanell should occasionally be given his own performance dates – and when he played the lead, the play would be “Andy and the Orphans,” with some scenes rewritten for a male lead.

On the first day that the cast rehearsed in the actual performance space at the Laura Pels Theater on 46th Street, Barbanell, urged by Ferrentino and Ellis, stood up and enthusiastically recited Romeo’s balcony speech from Romeo and Juliet. (“But soft, what light through yonder window breaks?”)

Encouragement for this cast was not in short supply, Barbanell noted.

“Because I have Down syndrome, I’m down and I’m up,” Barbanell said. “I’m like an elevator, and they brought me up,” he added, referring to Ferrentino and Ellis.

Ferrentino and Ellis have embarked on a learning process of their own. Neither had ever done anything like this. And it turned out not to be as daunting as it seemed. “The questions that we had, so far, are, ‘What is it like having actors with Down syndrome in our professional rehearsal space?’” Ferrentino said. “Well, we’ve answered at least that question. It’s not that different. So the next question is, what would it be like to have them in performance? Who knows what the answer to that is?”

Ellis added, “That will be the next thing.”

Being an advocate for those with disabilities is a role Brewer and Barbanell take seriously. They both want to open doors and change attitudes.

Barbanell told a story about working as a busboy at an assisted-living center, where he constantly heard epithets from his co-workers directed toward people with disabilities.

When he found out he was cast in Amy and the Orphans, Barbanell had a message for them on his way out the door.

Keto diet: What is it and does it actually work?
8

Turnkey Terenure home with windows on the world for €1.795m
10

50 people to watch in 2020: the best young talent in Ireland
Real news has value SUBSCRIBE