I’m doing the dirt on my grit friend

Grit Doctor: Don’t let yourself get sluggish by losing pace alongside a loyal friend 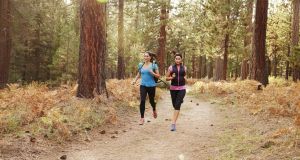 Not too fast, not too slow: the perfect combo.

What were you thinking?

I wrote a recent column extolling the benefits of having a running buddy, one who is a tiny bit grittier than yourself.

And I, of course, stand by that brilliant advice.

However, it turns out having two running buddies at opposite ends of the grit spectrum is not such a good idea. Being human (a bit lazy) you see, I gravitate towards the running buddy at the wrong end of the spectrum, the one who runs so slowly and over such a short distance, that I could run with her three times in the same day and still not break a sweat.

She is also a best friend and neighbour, so the logistics couldn’t be more straightforward and the run usually ends up with a coffee at one of our houses.

Well, what I gain in espressos and therapy, I’m rapidly losing in fitness. So much so that I can no longer keep up with my other running buddy (let’s call her the grit fiend). I’m not sure whether grit fiend has taken her training to new levels such that the gap between us has become too wide, or if I’m lowering the bar each week and losing fitness with these far-too-easy runs with my neighbour.

Whatever it is, what started out as a positive motivating experience for me has turned into one of slight dread. Can I face it? Is it going to be too difficult, too long, too fast? What if my knee caves in, what if I’m late back? Partly perhaps because she is in charge of the route and we run off piste, I’m always uncertain where exactly we’re going and so end up just trailing her anxiously like a lame dog.

I’m sure I expend ludicrous amounts of energy panicking about where I am, when the next terrifying hill is coming and how long it would take me to get home were I to get injured. There is something to be said for the same old same old tried and tested running route that you know backwards. Maybe that’s a shameless Run Fat B!tch Run plug, or maybe I’m just making excuses for myself.

The upshot of all this is that the fear of a run with grit fiend has made me skive them in favour of the too-easy ones with my neighbour. And because these two women are friends, the favouritism I’m currently showing towards my neighbour has not gone unnoticed and has made things a tiny bit awkward between us all. Grit fiend doesn’t understand why we can’t all run together (neighbour refuses on the very sensible grounds that grit fiend is too gritty and she wouldn’t be able to keep up). These are valid points.

None of this was a problem until I found myself a month away from a half-marathon and realised I’d been basically fast walking round the woods for the past few months and would need to get a lot fitter to be race ready.

So, you might think I’d take a leaf out of my own book and go back to running solo, but I haven’t. I’ve committed the worst kind of sin, and found a third running buddy, who I’m running the half-marathon with. She suits me just fine. She laps up laps as I do. She shares my height and leg length so our running strides are identical. She enjoys “quiet time” so we run some laps in total silence while enjoying the perfect symmetry of our running strides.

We are in tune with each other’s grit levels and good at topping each other up – “are you okay? have you got another lap in you? Come on, one more no more. We are now on eight laps of the woods. Once we reach 10, we’re ready. Job done.”

The Grit Doctor says: Find a buddy who is not too hot and not too cold, but just right. For now.

Without visitors, my home became an empty doll’s house
4