The cancer survivor who still has to pay the price

Surviving cancer but living with lymphoedema 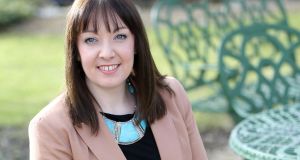 In the past decade Nina Murray’s life has changed beyond recognition.

In 2008, she was diagnosed with cervical cancer and while fortunately it was caught early, she underwent a gruelling treatment programme, life-altering surgery and although she survived her ordeal, has been left with lymphoedema – a condition which causes the limbs to swell way beyond normal proportions.

When she met her husband Tony at the end of 2003, the civil servant had no idea how much would happen to her in just a few short years.

“Tony and I met in Dublin on New Years’ Eve and have been together ever since,” she says. “We got engaged in December 2007 and got married in May 2009, but a lot happened in between those two dates.

“It started when I had a smear test in 2008 because my GP was concerned that I was having some unusual bleeding. I had to wait three months for the results which revealed that I had CIN3, which denotes the highest level of cell change. So I was referred for a colonoscopy, but at the time I wasn’t too worried as I had read that most people with this diagnosis go on to have laser treatment to remove pre-cancerous cells – so I thought that would be the end of it.”

But the Wicklow woman also underwent a biopsy which preceded a CT scan, MRI and a PET scan – the results of which revealed that she did indeed have cancer which seemed to have spread beyond the cervix. This news came as a devastating blow which was compounded when she was advised to have IVF treatment and egg-freezing in order to give her some chance of conceiving in later life.

“The early scans looked like it had spread to behind my bowel and pelvic wall and at that stage the treatment plan was radiotherapy and chemotherapy,” she says. “We were referred to the fertility consultant to see about going through an IVF cycle to make embryos to freeze.

“However, a final PET scan seemed to rule out a spread and it looked like the tumour was confined – but it was high into the cervix and close to my womb – which meant that I would need a full radical hysterectomy in order to ensure there was a clear margin.

“So on November 23rd, 2008, I had a radical hysterectomy where my womb, my cervix, the muscles around it, one-third of my vagina and 23 lymph nodes were removed.”

Her GP suspected lymphoedema, which can be a side effect of cancer

Thankfully the operation was a success and all of the cancerous cells were removed. Murray believed she could now get on with her life and a few months later, she and Tony got married.

And while much of her honeymoon was spent convalescing and getting used to some of the “challenges” that arose after surgery, the new bride was confident that, despite the operation rendering her unable to conceive, her health troubles were over.

But sadly, not long after returning home, having noticed some swelling in her left leg, her GP suspected lymphoedema, which can be a side effect of cancer.

“There were no services available for treating lymphoedema, so I went to see a physiotherapist who broke the news to me that I did indeed have the condition and my leg would never return to normal,” says the 37 year old. “I would have to stop wearing heels, shaving my legs, taking hot baths and would have to wear made-to-measure compression tights every hour of every day for the rest of my life.

“I felt angry, resentful, victimised and scared. It was a lot to take in.”

Eight years after being diagnosed with lymphoedema, Murray’s life is very much defined by her condition and she believes much of her discomfort could have been avoided if she had known in advance that having survived cancer; she was at risk of developing the disorder.

“Since we have been married my big leg has been a big deal,” she says. “My body doesn’t do the same as it did before my surgery – I can’t have children and sometimes other bodily functions are a chore. Also my body doesn’t look the same – it isn’t the body I had when my husband asked me to marry him and I don’t like the way I look – cancer has caused all of this.

“However, my leg needn’t have been this big. If I had known what lymphoedema was, what to look out for, that wearing compression garments – either a precaution or as soon as swelling appeared – and if I could have afforded, in those early days, to pay for the treatment I needed – in the absence of publicly funded treatment being available to me – my leg wouldn’t be this big and maybe I could wear short dresses and strappy sandals and get on with my life.

“As it is I will never lie on a beach or even walk on a beach in a swimsuit again and we won’t ever contemplate going on a sun holiday again. On top of that I can’t even cross my legs. I can’t travel long distances in a sitting position and even walking from my bed to the shower can be painful when the fluid begins to flow into my lower limb.”

Despite everything she has endured, Murray has no choice but to get on with life – lymphoedema has become part and parcel of her everyday routine. And while it is too late to do anything to change her condition, she does urge others to be aware and seek help if at all worried about any symptoms.

“Nowadays I moisturise my skin every day to avoid it breaking but I can’t shave or wax in case I nick my skin,” she says. “I carry antibiotics everywhere in case I start having symptoms of cellulitis – a skin infection – and routinely wrap my legs in high compression multilayer bandages to help loosen and move the fluid. I also need to routinely have manual lymph drainage therapy to try and stop additional fluid accumulating in my leg.

“This is my life now and I have to try to look beyond the swelling because if I don’t, I can’t expect anyone else to. But I would encourage anyone who is worried to find a specialist with experience and connect with other people living with the condition.”

Parenting in my Shoes: ‘I hope the girls just continue on the journey they’re on, because I’m so impressed’

Speed, success, diplomacy and delivery: the formula for a Covid-19 vaccine
10