Are you ready for puberty?

Are parents having the puberty talk with their children early enough? 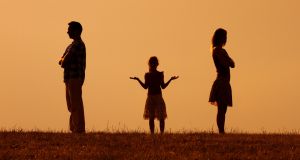 Children need to know what is happening to their bodies at an earlier age than ever before. Are you ready to talk? Photograph: iStock

“Am I normal?” is a question many children ask themselves, especially during times of great change such as puberty. But with one in four girls having their period before being taught about it in school, are children getting the answers they need?

It’s not new to talk of girls growing up fast. As a mother of three young girls, I can’t help but compare how they seem much older than I was at their age. Perhaps every generation of parents have thought this, but the age of puberty has consistently decreased in the last century and girls are becoming women earlier than ever before.

Are parents and primary schools prepared for children in women’s bodies long before their emotional development has caught up?

Puberty is the two- to three-year process defined by breast development, pubic hair and, finally, the onset of periods. Currently, children are taught about puberty when aged about 11. Yet, the onset of puberty – which used to occur at 17 in the 17th century, and 15 a century ago – has now dropped to nine or 10. Relationships and Sexuality Education (RSE) isn’t compulsory in primary schools, and is a live issue for many, given that the onset of puberty can start for girls as early as eight, and boys at nine. If parents are waiting for school to do “the talk”, they may be leaving it too late.

“The age of puberty onset has probably settled over the last couple of decades,” says Dr Declan Cody, consultant paediatric endocrinologist at Our Lady’s Children’s Hospital in Crumlin, “although we do deal with issues such as precocious puberty, whereby girls as young as seven or eight can be displaying early signs such as breast development.”

Precocious puberty is 10 times more common in girls than boys, and often has no explanation. “A lot of girls will be starting breast development around the age of eight, and so certainly girls having a period at the age of 10 isn’t abnormal, with of course the massive hormonal changes going on before and during that period.”

Obesity The increase in obesity can be a factor in early puberty. Fat cells produce estrogens which play a vital role in girls’ bodies, helping to stimulate breast growth, hormonal imbalance, contributing to gynaecological conditions and, importantly, playing a major factor in girls starting their cycles much younger. But as girls of normal weight are starting puberty earlier as well, albeit at a lower rate than girls who are overweight, other factors are

The main reason young people are hitting puberty earlier is “because we are much healthier than we were a century ago, and have moved away from a hunter-gatherer culture to a sedentary lifestyle,” explains Cody.

But the earlier puberty begins in girls “the higher the risk of depression, eating disorders and even ovarian cancer later in life,” Cody says.

While girls’ bodies are developing at a more marked rate, the timetable of brain changes associated with adolescence has not shifted. Emotionally mature developments such as striving for greater independence, learning complex thought processes and the ability to think about other people still happens around the age of 12-14. But whereas they used to happen before puberty, they now often occur after, leaving an increasing generation of little girls dealing with what is rapidly becoming an adult’s body, while they still have the minds and emotional maturity of children. This can only be exacerbated by the fact that we live in quite a hyper-sexualised society.

Emotional problems Being unable to fully comprehend the hormonal and emotional changes that are part and parcel of puberty, or what it can mean for them on a reproductive level, can have profound repercussions. It is perhaps no surprise that early puberty is linked to emotional and behavioural problems, as well as significant health issues such as an increased risk of diabetes, heart disease and other cardiovascular diseases, as well as cancer, later in life.

All primary schools are required to provide a RSE programme as part of the Social, Personal and Health Education (SPHE) curriculum, but there is no set plan and in 3rd and 4th classes the issue of puberty is planned by the individual schools based on their own ethos.

“The content of the SPHE curriculum is age appropriate and the concept of growth and change is introduced to children from the very beginning of primary school and this understanding is built upon as the child moves through to 6th class,” according to David McGovern of the Department of Education and Skills. But because there is no standardised SRE curriculum for primary schools, quality of a typical primary school child’s education about puberty is hard to predict.

Children can also be withdrawn from this class by parents, leaving them potentially uninformed about changes happening to their bodies. The more prepared a child is to changes, the better equipped they are likely to be, and the more control they will feel they have over their own bodies.

Home supports As in all issues around sex education, it is assumed that the school supplements what is being taught and spoken about in the home. Supports such as the HSE’s Busy Bodies Adolescent Development Programme

provide information on the physical and emotional changes that children may experience during puberty, to reassure them that puberty is a normal part of growing up. The resources are aimed at parents of children aged between 10 and 14, and support teaching of the fifth and sixth class component of RSE within the context of Social Personal and Health Education.

In the UK last year, the Sex Education Forum asked 2,300 young people aged between 11 and 25 about their experience of sex and relationships education (SRE) at school and found 24 per cent of girls started their periods before it was covered in school. Draft sex education guidelines published by the UK department of education last month will now lower the age that puberty is taught to seven, amid an acknowledgement it is often currently given too late.

“With the average first period at age 12.8, the majority will start puberty around 10. But because that’s an average, there will be many who begin much younger than that with breast development and hormonal changes,” says Cody. “Knowledge is power, and for girls and boys, the onset of puberty leads to physical and psychosocial changes that can reek havoc during tween and teen years. It’s reasonable that children should be taught about puberty at the right time to give them a chance to understand what is potentially happening to some of them.” Parents might need to prepare themselves.