Too cold for a run? This is perfect weather for running 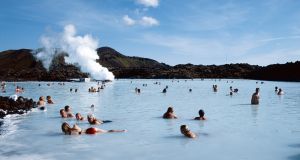 People bathing in The Blue Lagoon, a natural hot spring in the south of Iceland

Question: Where does the Grit Doctor go for grit?

Answer: Iceland administered my most recent dose of grit.  I went for a spa weekend with two friends – blissfully without our children or husbands – which made it a spa of sorts already, but the unforgiving temperature of minus 10 degrees, with precious few hours of daylight, introduced an element of grit from the off.

Even the outdoor thermal pools on the beach near our hotel were closed at this time of year on account of the bitter cold.

The Northern Lights failed to show on our last evening, and to make up for the disappointment my running buddy (who I’ve written about here before – a runner significantly more gritty than myself on every level), suggested an early morning jog. It was our last opportunity to go as we were flying home later that day, so we set our alarms for 6am, having laid out all our running kit: ready-to-jog.

The temperature was of course a problem, but we’d been on a 15-mile hike the day before and because the sun shone and there was not a breath of wind, once warmed up, we had found it quite mild and pleasant. Overnight however, it had snowed and when we set off from the hotel for our run, it was still snowing again and the wind was howling.

We made our way back out to the coastal running path in pitch darkness, not able to talk because the whistling wind turned into a scream the closer we got to the sea front. I found breathing difficult because it felt as though the icy air was freezing into my lungs, and limiting their capacity.

It must have been worse for the grit fiend, because she was running ahead of me straight into the wind, setting the pace and acting as my human shield. We hadn’t gone far when she sensibly suggested we turn around. At least then we’d be running with the wind behind us. This seemed at the time like an incredible bonus.

The previous day we’d talked about her journalist days in war zones and how important it was to protect your feet.

We couldn’t see where we were running because of the dark and the driving wind made us squint. That thought – of protecting our feet – was in the forefront of my mind as I skidded on a bit of invisible ice, but thankfully did not fall over.  My friend suggested we head back to the hotel and I agreed, because, what if one of us twisted an ankle and went lame? How would we get back to base camp?

It was pure common sense (and not a lack of grit) that dictated we bail after three miles, although it had felt like a 10-mile run, exhilarating because of the danger and so unlike any other run I’d done before.

From there we headed straight to the breakfast buffet – food had never tasted so good, and from the buffet to the Blue Lagoon, an amazing natural geothermic pool set in Reykjavic’s volcanic rock, which claims to be the 25th wonder of the world.

The Blue Lagoon is not spa-esque in the traditional sense, because it’s outdoors, and you’ve already heard how cold it was.  So it was in our swim suits that we walked barefoot in minus 10 degrees and almost froze to death before before plunging into the warm lagoon.  There is a grit-free option whereby you can enter the lagoon from within the building, but our other companion (who’d been before), claimed you only really experience the benefits if you freeze first before going into the warmth.

She was right, and it was an incredible experience, but every time we got too comfortable she would suggest we either get out and see how long we could bear it before going back in, or just stand up as high as we could in the water, shoulders and arms in the air and see how long we could cope with the freeze.  First one to cave in buys lunch, that kind of thing.  And food is prohibitively expensive over there. You see, not very spa-ry . . .

Every run since I got home has been a breeze though, because I carry that Iceland run with me every time I set out. I take myself back to my happy place, which is of course, a place of grit.

Every run now feels like a home run, because it is

At least the temperature is mild, I tell myself, and there’s more daylight, and nothing about the woods feels dangerous or scary.

Every run now feels like a home run, because it is. I’ve never felt lighter on my feet, which is lucky because Christmas is around the corner and I am going to need all the help I can get to stay sane through the festive season.

Never again will I complain of the cold, because this is bikini-wearing weather compared to Iceland.

The Grit Doctor says
Find your ‘gritty’ place and go there on your runs to develop a sense of gratitude and humility for the comparative ease of the running conditions.