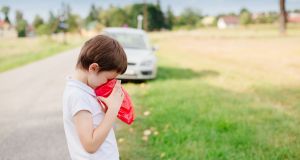 A child feels the effects of motion sickness.

Decades ago, during regular cross-channel voyages to visit my Belgian girlfriend – now wife – I became lovesick . . . and seasick.

I groaned into the white ceramic void, unaware that the term for my rampant nausea stemmed from the ancient Greek word for ship, naus. Nor did I know that, four centuries earlier in the same waters, the Spanish Armada’s defeat in 1588 was partly attributable to seasickness among the Iberian invaders.

Seasickness, affecting 20-60 per cent of sailors, depending on sea conditions and voyage length, is a form of motion sickness provoked by mechanised or animal transport. Thus, Dr Doreen Huppert, in the journal Frontiers of Neurology (April, 2017) notes that the Chinese poet Du Guji (725-777 AD) references horse-drawn cart-sickness in a poem; and some of Napoleon’s camel corps during the Egyptian campaign of 1798/1799 succumbed to sickness induced by riding their haughty ungulates. And the 20th century saw the advent of visually induced motion sickness associated with computer animation and virtual reality displays.

According to Dr Kenneth L Loch, writing in the British Medical Journal Best Practice (updated November, 2017), motion sickness is not a disease, but “a lifelong individual physiological/psychological trait . . . and may be viewed as the body’s own protection against unusual, potentially threatening environments”.

Transport surveys reveal that one’s susceptibility to travel sickness develops during childhood, peaks around puberty and declines slightly through adulthood, with vomiting relatively infrequent beyond the teenage years.

Factors that could increase one’s chances of succumbing to motion sickness include childhood age and being female. A study of ferry passengers cited by Loch found a 5:3 female-to-male risk ratio for vomiting, and Alan Nathan, writing in the Pharmaceutical Journal (2006), states that female susceptibility increases with oral contraceptive use and during menstruation or pregnancy.

In addition, having a family history of motion sickness, a history of migraine, exposure to unpleasant smells or visual stimuli and psychological factors such as anxiety are further risk factors, and there is some evidence of a slightly increased susceptibility to motion sickness among those of Chinese origin.

As to the cause of motion sickness, a clue to the mechanism derives from the fact that, as Dr Loch notes, despite “wide variations in susceptibility to motion sickness . . . only those individuals with a non-functional vestibular system [inner ear] are truly immune”.

In 1978, Prof James T Reason of Manchester University, writing in the Journal of the Royal Society of Medicine, proposed the neural mismatch theory of discordant sensory information to explain motion sickness. Normally, movement-related information is supplied to the brain by our eyes, inner ear and receptors in skin, muscles and joints. This is co-ordinated and compared with other motion-related experiences around us, allowing normal control over movement. However, motion sickness occurs when the sensory-derived signals to the brain do not match our expectations associated with the movement that is being undertaken.

Take, for example, trying to read in a moving car or a tilting train, which compromises the normal reflex relationship between the eyes and inner ear that typically lets us read a book in an armchair. This helps explain the results of a 2013 study which found that up to 25 per cent of co-drivers in rally cars suffered from motion sickness while, for example, map-reading or sitting in the back seat.

By contrast, drivers seldom suffer because, as a correspondent in the Lancet (October, 1955) observed: “The driver knows when he is going to swing the car over, to brake or accelerate, and his semi-circular canals [of the inner ear] therefore know what is required of them.”

So much for the “how” of motion sickness; as to the “why”, one popular theory cited in the journal Current Opinion in Neurology (2015) suggests that “motion sickness could have evolved from a system designed to protect from potential neurotoxin ingestion by inducing vomiting when unexpected central nervous system inputs are detected that might indicate poisoning . . . ”

It seems that the risk of motion sickness is part of the price many of us must pay for the enjoyment of travel.

HOW TO MINIMISE AND TREAT MOTION SICKNESS

– Avoid heavy meals, pungent smells and alcohol.
– Sit in the front passenger seat of a car, or towards the front of a bus.
– Don’t read; rather, look out of the window at the road ahead.
– At sea, stay on deck if possible. If below deck, sit or lie as still as possible, and access to cool air together with slow deep breathing may help to control mild nausea.
– For those patients who are often exposed to motion sickness, through occupation, for instance, repeated brief exposures to the provocative motion is an effective means of becoming habituated to it.
– It is advisable to consult one’s GP for specific advice and pre-travel treatment, if necessary.
– Ginger (active ingredient gingerol) may suppress vomiting in motion sickness, but there is conflicting evidence on its efficacy.

Dr Loch, in British Medical Journal Best Practice (updated November 2017) states: “There is considerable overlap with drugs recommended for dizziness, vertigo, vestibular disease, and motion sickness symptoms. Teenagers and adults should take these only if they are not expected to operate machinery or to function at peak levels of efficiency. They are not indicated for repeated motion exposures, because they impede the advantageous habituating effect of repeated provocative motions.”

Anti-motion sickness drugs include hyoscine (scopolamine) and anti-histamines such as meclozinel. But Loch states: “Of these, hyoscine is generally accepted as the industry standard. Although its relative effectiveness has rarely been put to direct comparison, much experience with its effectiveness has been gained in the military, where its benefits are widely accepted. However, all of the drugs used for preventing motion sickness, alone or in combination . . . are only partially effective.”