My first Zumba class: I felt like the fat comedy extra in a ‘Fame’ spoof 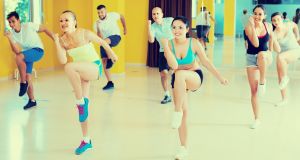 A:  We did it.  That's me and our lovely au pair, Annalisa, pictured below, outside Pure Gym after our first Zumba class.  But, will it be our last?

So much it seemed was against us. The first problem was our timing. It was a Saturday lunchtime class, and we arrived five minutes late (which was entirely my fault), although in my defence, I was gritting out a trampoline session with the twins at Flip Out and getting to the gym on time was always going to be tight.

As an aside, segueing from trampolining to Zumba is in no way effortless and not to be repeated. My legs were already sore from the trampoline, not to mention my brain which was totally frazzled by the experience.  Good frazzled, but still frazzled.

And I was late, which I hate!

We took ourselves to the only space, right at the back of the class, although to call it a space is also inaccurate, as there really was none, and the Zumbanistas (my name for the hard-core once) who had to budge up to make room for us were most displeased about it.

The class was well under way – a room full of people dancing very well indeed to extremely loud music – and I looked at Annalisa as if to ask whether she was sure about this, and if we in the right place, as we tried in vain to join in with a series of extremely elaborate and fast moves.

I felt like the fat comedy extra in a Fame spoof as I repeatedly went left when the rest of the room turned to their right.

What I didn’t realise at the time (and would have certainly walked out if I had known), was that this Zumba class had started months earlier.  It was a term’s course that we were valiantly joining – in week eight.

Annalisa had meant kindly in withholding this information from me, but the fact that I did not know any of this at the time did not work in my favour.  I pranced about mystified, trying to work out how on earth it was that these other people had got to grips with all these intricate moves, squats, spins, dips, grinds, claps and gyrations so quickly, and were able to imitate the instructor so accurately (was it that crucial five minutes we’d missed at the start of class)?

Was I really this mal co-ordinated?  Am I this bad at dancing?

Our Zumba instructor was an extremely fit snake-hipped dancer who would not have looked out of place as a professional on Strictly Come Dancing.  After each song, she cheered the group, and gave us a chance to have a sip of water (in our case an opportunity to wince and raise eyebrows at each other).

My moment of glory came half way through the class when Michael Jackson’s Thriller came on.  I was able to join in more enthusiastically at this point, jogged by the memory of my misguided attempts at the same moves from various weddings past, including my own, but other than that brief moment of respite, my failure was spectacular.

When Despacito came on I thought I might die laugh/crying because I spend most of my time with the twins begging them to stop their woeful renditions of this song.

How much they’d both love Zumba, I thought.  How much Olly would love it.  And yes, how much I too, would love it, if only I knew how to do it.

For the uninitiated, Zumba is an exercise fitness program created by the Colombian dancer and cyclist/choreographer Alberto Beto “Power Pedal” Perez during the 1990s. It features movements inspired by various styles of Latin American dance and is performed primarily to Latin American dance music. It’s a full body workout to boot, delivering cardio, conditioning and strength training while improving co-ordination. Everybody was smiling throughout the class, so it must be great fun when you know how!

The 45 minute class passed quickly. And, despite my intense embarrassment, I’d had fun, and could see how much more fun it would be once I knew how to do the moves properly, so . . . we’ve signed up for classes in January!

Next year, we are going to learn the steps from scratch and find our inner Latino.  Who knows, in Annalisa’s case it may lead to some actual romance.

In mine, I’m simply hoping to look less comical in class.