Man’s best friend: owning a dog really is good for your health 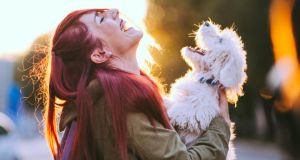 Dogs really are our best friends, according to a Swedish study that says canine ownership could reduce heart disease.

A study of 3.4 million people between the ages of 40 and 80 found that having a dog was associated with a 23 per cent reduction in death from heart disease and a 20 per cent lower risk of dying from any cause over the 12 years of the study.

Previous studies have suggested dogs relieve social isolation and depression – both linked to an increased risk of heart disease and early death.

The American Heart Association was sufficiently swayed by a review of dozens of studies to release a statement in 2013 saying that owning a dog “was probably” associated with a reduced risk of heart disease.

Their reluctance to more strongly endorse dog ownership is because most studies are what is called observational – researchers note an association, but can’t prove causation. This means that other factors might explain why dog owners are healthier than, say, goldfish owners – for example, perhaps only people who are fit in the first place buy pets that need daily walkies.

Tove Fall, an epidemiologist and the lead author of this latest study, says they tried their best to allow for any differences in education, existing ill-health and lifestyles between those with and without dogs. The study found the biggest positive impact of having a dog was on people living alone.

“It seems that a dog can be a substitute for living with other people in terms of reducing the risk of dying,” says Fall. “Dogs encourage you to walk, they provide social support and they make life more meaningful. If you have a dog, you interact more with other people. If you do get ill and go into hospital and you have a dog, there’s a huge motivation to try to get back home.”

Of course, getting a dog and watching it from your sofa while you eat fatty food is not going to reduce your risk of heart disease. And a toy dog may look cute, but won’t have any effect either.

Fall’s study showed the most health benefits came from having retrievers or pointers. Until her German shorthaired pointer died last year, she ran 10km with her most days.

“In Sweden, we have one of the lowest rates of dog ownership in Europe, ” says Fall, who has recently got a new puppy. “Maybe this will increase the acceptance that dogs are important to people.”

Read: More than just a dog – An Irishman’s Diary on missing a faithful friend

A classic white and one of my favourite reds, each for €11 or less
5