With racing yachts now exerting thousands of pounds of force, crews need to reach peak fitness to prepare for regattas 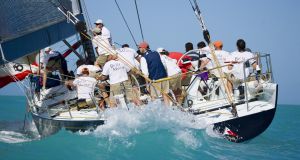 There was a time when success in competitive sailing basically required great seamanship, strategy and tactics.

Fitness was just part of the mix.

Grand Prix racing yachts have always been complex, but powerful hull designs have evolved in recent years, with sky-scratching carbon-fibre masts and powerful thermomolded sails, which exert thousands of pounds of force.

These boats are markedly faster and more athletic than their forebears. Managing a contemporary raceboat is physically demanding, and the crew must execute complex, highly choreographed manoeuvres, with great strength and often with minimal notice. Crews that race aboard the fastest boats must be ultrafit and train like Olympic athletes to prepare for world-class regattas.

“Being an athlete is needed, and sailing is moving that way,” says Ryan West, head of athletic performance for the Bella Mente and American Magic racing programmes. “We look at sailors as individuals, and we treat them in a holistic manner, including nutrition, hydration and loading, both on and off the water.”

At the Maxi Yacht Rolex Cup, hosted by the Yacht Club Costa Smeralda in Sardinia, which finished last Saturday, some of the world’s biggest sailing yachts competed, and top teams frequently draw America’s Cup-level sailors, like some of those on Bella Mente, who are expected to race in the Cup with American Magic.

This is not the kind of yachting where stewards serve lunch. It is hard work, and performance is paramount. There is zero patience toward anyone who is not making the yacht sail faster.

Once the team announces a manoeuvre, the lighter, more nimble sailors scurry to the foredeck to finagle sails, while larger crew members, called grinders, assume their face-to-face battle stations at the boat’s five, two-person grinding pedestals, which deliver power to the manual winches that trim the shape of the sails to match conditions and wind angles. Imagine stationary bikes for the arms.

“There are times when guys are spinning the handles for a short time but at high intensity,” says Steve Wilson, a design team member for Bella Mente and American Magic. “Other times they’re grinding for longer periods, but at lower power. One is bench-pressing, one is cardio. The big guys are expected to do both.”

Getting into shape for this demanding work requires proper hydration and nutrition, and carefully monitored and role-specific workouts, diet and downtime. “Rest and recuperation are paramount aspects of allowing athletes to improve,” West says. “When they train, they’re applying a stimulus, but they only get stronger by allowing their body to recover and adapt to the load. So, in addition to training, they need ample time to rest,” which includes one off day per week.

“We run a periodised yearly programme,” he says, explaining that the team’s America’s Cup challenge gives them the luxury of a non-stop, multi-year training programme. “What phase we’re in will determine what the workout is,” he adds, describing the four training phases – general preparation, strength, specialisation and power – that enable the sailors to achieve peak fitness for top regattas.

The team’s work day typically starts with an hour of strength training and conditioning. This involves 15 minutes of mobility work before transitioning to crucial lifts and core work, such as sit-ups and crunches. Sailing comes next, followed by role-specific training.

For example, the grinders can expect afternoon gym sessions on machines that mimic onboard grinding pedestals. “We look at what each role demands, each individual’s ability, and what physical attributes they need onboard,” West says.

Bella Mente has eight manual-power winches that are driven by five grinding pedestals and up to 10 sailors. Switches direct this sailor-generated power to these winches or the yacht’s hydraulic systems. “Winch handles can turn the winches, or they can turn the rotary hydraulic pump,” Wilson says. The pump powers the hydraulics that control parts of the yacht’s sails and rigging. “The sailors can activate a button that sends the drive power to the rotary pump or frees the linkage” to spin a particular winch.

Wilson says that in 15 knots of wind, sailors handling Bella Mente’s huge mainsail and jib would be wrestling sheet loads of 3,500lb to 8,000lb, while the mast-supporting headstay and running backstays must withstand 32,000lb and 18,000lbs. Off the wind, Bella Mente’s spinnaker, which flies from a 110-ft carbon-fibre mast, can deliver 4,000lb sheet loads.

“Physical training becomes quite a challenge,” says Cooper Dressler, a grinder for American Magic and Bella Mente. “There’s not time off. You can’t take a week’s vacation because you’ll lose your fitness fast. We basically have to maintain peak fitness all the time. We spend 20 to 30 hours in the gym per week. It’s a full-time job.”

While the Maxi 72 class offers the regatta’s stiffest competition, the J Class yachts, ranging in length from 119ft to 143ft and built to the design rule that governed the 1930-37 America’s Cups, are its grandest dames and weigh about as much as an empty Boeing 777-200.

For comparison, in 12 knots of wind, Holmberg estimates that Topaz’s mainsail would deliver sheet loads of 30,000lb, while her headstay and running backstays must withstand 72,000lb and 64,000lb. Topaz’s 161-ft mast also flies staggeringly heavy sails.

“Moving sails is the biggest job, before and during sailing,” Holmberg says. “Hoisting and dropping sails requires everyone who isn’t steering or trimming to assist. Jib drops can see 15 to 20 guys helping muscle the sail onto the deck.”

Unlike that of the teams for big races like the America’s Cup and Olympics, which typically provide fitness and nutrition programmes, the fitness culture aboard Topaz is self-regulating, Holmberg says. “It’s up to each of us as professionals, or just smart sailors, to be at the required fitness level.”

That is not saying that J Class sailing is casual. Racing days are often 12 hours long, and team fitness is vital.

Wilson says it is important to achieve the right balance between performance and reliability, from the crew and the boat, whether aboard a J class or a Maxi 72. “Yacht racing is like any racing,” he says. “Getting it right is really tricky.” – New York Times