Surgery in the 19th century: From barbershop phlebotomies to the ‘fashionable, ephemeral craze’ of antisepticism

In its first 50 years, stories of ‘remarkable’ and ‘extraordinary’ operations became regular features in The Irish Times 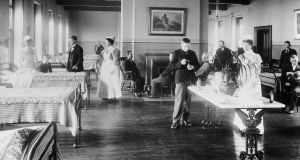 Nurses and patients in a hospital ward in Ireland circa 1890. Photograph: Sean Sexton/Getty Images

Public fascination with surgical developments was mirrored by this newspaper throughout its first 50 years; stories of ‘remarkable’ and ‘extraordinary’ operations became regular features.

Barbers provided the earliest surgical services. As an article in 1885 explained, the barber’s pole “was to show that the master of the shop practised surgery, and could bleed a vein as well as take off the beard”. The pole represented “the staff being used in the operation of phlebotomy” – which patients would grasp to protrude veins for the blood-letter.

Hygienic operating facilities are a relatively recent prerequisite. Hospital conditions were unsanitary, but they were worse for prison surgeons. Retiring in 1862 from a Dublin jail, one declared: “I am now relieved from a responsibility which has pressed heavily upon me for more than 20 years, consequent on the imprisonment of lunatic prisoners in apartments common to all – the violent maniac, the feeble, and the imbecile. The consequences are rendered apparent in sanguinary incidents, loss of life, and the most perilous operations of surgery. This blood-stained scene is a blot on humanity.”

One of the great medical milestones was Joseph Lister’s publication of ‘The Antiseptic Principle in the Practice of Surgery’ in 1867. However, two decades later, Prof William Stokes, of the Royal College of Surgeons in Ireland, recalled the hostility within “surgical ranks” to the “principles and practice of antisepticism”, which had been “held up to contempt as little else than a fashionable, ephemeral craze”. Surgery, added Stokes, was now in its “golden age”, as he discussed a “serious case of cerebral abscess”, for which he had “trepanned over the seat of the injury”.

References to trepanning – boring a hole in the skull – for head and brain injuries are plentiful. In 1882, police in Ballina shot locals celebrating the prison release of agrarian campaigner Michael Davitt. The first to die was “Patrick Meleady, aged 14 years, whose skull was injured by a buckshot on the night of the affray. The skull was trepanned . . . and portions of the skull were taken away . . . He lived 15 days and 6 hours from the time he received the wound.”

Many of Ireland’s first surgeons honed their skills in military service – or treating wounds inflicted during Fenian activity. These included renowned surgical innovator Richard Butcher. One case, described in 1874, was: a “terrible deformity from a badly-united fracture of the thigh-bone, in which the limb was five inches shorter than its fellow, in a sailor 20 years of age. To remedy this, Mr Butcher devised a surgical clamp to re-fracture the thigh-bone, which was accomplished under chloroform, without damage to the soft parts. The limb was forcibly extended, and so admirably adjusted that its length was maintained until callus was thrown out in abundance, ultimately to effect a complete and satisfactory cure.”

Surgical training, however, was still scant in 1896, when surgeon Robert Patteson bemoaned: “A short course of operative surgery extending over a couple of months, in which the student performs some eight or ten operations, is all that is required before he is launched forth to deal licensed destruction with the dangerous tools he has scarcely learned to handle, and certainly not to master.” Patteson urged students to take up handicrafts such as etching, wood-carving, or metal work, for the “cultivation of precision of hand and eye”.

The jubilee of surgical anaesthesia – which began with ether – was celebrated by Lister in 1896: “It has rendered possible operations which in former times could not be performed at all, while it has immensely diminished the danger, as well as the pain.”

As the century drew to a close, Rontgen Rays became another surgical tool. A demonstration at Dublin’s College of Science in 1896 displayed a “shadowgraph”, “where a needle had become imbedded in a woman’s foot. The needle was so exactly located by means of the rays that its withdrawal became a simple matter, and yet several previous attempts to give relief to the woman had proved unavailing.”

The 1905 radiograph of a “man-ostrich” in New York showed even more: “a body like a nest in him, and on opening the stomach it was found to consist of seven keys, seven penknives, twenty nails, a little spoon, a button-hook, and ordinary pin, and two watch chains . . .”

Long before World War injuries spurred on advancements in plastic surgery, there was demand for medics to remove disfigurements – some with ulterior motive. In 1894, a writer warned: “Surgery’s discovering of a way to obliterate facial blemishes has given the detective forces a great deal of difficultly in locating well-known criminals. By these operations the whole character of the facial expression is sometimes changed by a few deft jabs of a lancet.”

Correspondents related new techniques, such as “Skin Grafting” in 1880, when the skin of corpses was applied to New York patients with leg ulcers and burns. In 1896, a London surgeon was reported to have removed the “os calcis” of a foot, “impounded the collar bone of a lamb, part of a lamb which had been cooked at the hospital, treated it with certain acids . . . made it into a paste, and packed it into the cavity”. In an earlier operation, “a finger has been grafted into a nose, and chicken bones have been used to patch up small gaps . . .”

“Triumph of Surgery” in 1904 may have marked the beginning of surgery for cosmetic reasons. A German actress, “disfigured by a nose so extremely aquiline as to give her a most masculine appearance . . . sought the aid of a fashionable surgeon, who by means of a miniature saw of his own invention, and working entirely under the skin, so modified the exaggerations of the bone texture, that the actress’s nose now appears little different from the type known as ‘Roman’.”

Cancer patients were among the many beneficiaries of surgical advances. In 1901, our medical correspondent noted that operations which had “meant almost certain death are now performed in thousands with a small percentage of mortality”.

During this paper’s 50th year, experimental operations included the transfer of an amputated knee joint into another patient, and the transplantation of a 10-inch vein “from a live sheep into the leg of a man suffering from arterial aneurism”.

This newspaper was still less than 100 years old when readers celebrated the arrival home of Carmel Byrne, who in 1957 was the youngest baby to undergo successful heart surgery in Ireland.