Can mobile phone use cause cancer? 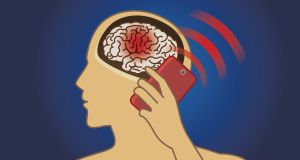 The concern about a possible increased risk of cancer is a reasonable one: mobiles emit radio waves from their antennae, some of which is absorbed by the body. Image: iStock

I suspect I’m not the only one who winces when I see children as young as eight chatting on a mobile phone. Although to be fair, the youngest mobile phone users are usually busy with fingers and thumbs bouncing off the keys as they expertly take on a challenging game.

When it comes to possible physical harms to children from mobile phone use, the big worry, naturally, is cancer-inducing damage from electromagnetic radiation (EMR).

But there are other risks.

Insomnia is one. A child with access to a mobile phone in bed may become part of a nightly group chat that eats into their sleep time. In addition, sleep onset can be delayed by the blue light rays from a screen that is used prior to sleep. Difficulty focusing, sore eyes and headaches, could be signs of eye strain.

A number of musculoskeletal problems have been linked to prolonged mobile phone screen time. Neck and back pain result from increased pressure on the child’s cervical spine, which occurs when they tilt their head forward and down. Add in a posture where they sit cross-legged on the floor and the spine is forced into an unnatural c-shaped position.

What about repetitive strain or overuse injuries? One study of university students showed how smartphone overuse enlarges the median nerve in the wrist, causes pain in the thumb, and decreases pinch strength and hand functions. It’s a response to intense stresses on the hand and thumb. Users who hold the device with one hand, have only the thumb to use the keys. Single-hand phone use also compels users to engage in repetitive flexion and extension of the wrist. Inflammation follows, leading to repetitive strain injuries such as carpal tunnel syndrome.

However, the six million dollar question for most of us is “can mobile phone use cause cancer in children”?

The concern is a reasonable one: mobiles emit radio waves from their antennae, some of which is absorbed by the body.

The only consistently recognised biological effect of radiofrequency radiation in humans is heating. It produces a small rise in temperature of up to 0.2C. But this is comparable to natural increases in temperature, such as during exercise, and does not pose a known risk to health. Radio waves are not thought to damage or alter the DNA in human cells.

If there were any health risks from the use of mobile phones, children might be more vulnerable because their bodies and nervous systems are still developing. Children’s heads are smaller than those of adults and their skulls are thinner meaning they have a greater proportional exposure to radiofrequency radiation emitted by mobile phones.

Data from studies in children with cancer do not suggest a link with mobile phone use. The first analysis came from a large study called Cefalo, which was conducted in Denmark, Sweden, Norway, and Switzerland. The study included children, aged seven to 19 years, who were diagnosed with brain tumours between 2004 and 2008. Researchers did not find an association between mobile phone use and brain tumour risk either by time since initiation of use, amount of use, or by the location of the tumour.

However, the average time between exposure to a carcinogen and the diagnosis of a resulting solid tumour is more than 30 years, so it will likely be several decades before any tumours induced by childhood EMR exposure are diagnosed. This has not stopped the WHO/International Agency for Research on Cancer classifying EMR produced by mobile phones as “possibly carcinogenic” to humans.

In 2011, the working group found “limited” evidence for increased risk of glioma (brain tumour) and acoustic neuroma (ear nerve tumour) in users of wireless phones. In effect, what the agency is saying is that we need to keep a close watch for a link between mobile phones and the risk of cancer.

Phones Special
- Can mobile phone use cause cancer?
- Medical devices & apps on phones
- ‘An extension of my arm’
- Monitoring my daughter's phone
- Spending months playing video games
- Do you run with your phone?

Jimmy Gralton, the only Irishman ever deported from Ireland
4

Green-fingered garden is to dye for
6