Smartphone addiction: ‘They are weapons of mass distraction’ 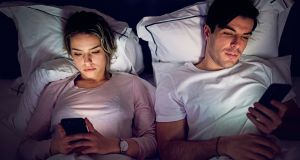 One way of better managing your use of a smartphone is to leave it in another room before you go to bed. Photograph: Getty Images

Many of us joke about how we – or other family members or friends – are addicted to their smartphones. But, there is a serious side to this ubiquitous behaviour and although smartphone addiction has yet to be classified as a mental disorder – psychiatrists and psychotherapists are dealing with troubling symptoms linked to technology overuse.

Dr Colman Noctor is a psychotherapist at St Patrick’s University Hospital, Dublin who has a special interest in how technology impacts on our mental health.

“People are not referred to us for smartphone addiction. It’s usually for anxiety, depression or other things but when you start to unpack their issues, a problematic relationship with technology is often there,” he explains.

The key sign of smartphone addiction is when the importance of using the phone plays a disproportionate role in your life to the extent that your functioning is impaired.

“If your work, performance or ability to engage in a task is compromised by screen time and if your concentration and mood are determined by whether you have access to technology and the internet, then it’s a problem,” says Noctor.

This amount of things we now do on our phones – from checking bus/train times, the weather and the news to listening to music – all create a dependency on the phone which fuels smartphone addiction for some people. But it is the compulsive need to check what’s going on, upload comments and/or check feedback on social media apps that are the real signs of out of control use of a smartphone.

Use of pornography sites, gambling apps or gaming are more serious sub-sections of smartphone addiction. “There is a hidden gaming community. It’s not the typical 19-year-old male hidden in a basement. Gamers include middle aged professional women playing two hours each night to the detriment of communicating with their husbands and children,” says Noctor.

The always-on work culture – with the possibility to check and reply to emails at all hours of the day and night – also fuels such addictions. “It’s a bit like the person who has two or three drinks every night but doesn’t realise they have a drink problem,” says Noctor.

Researchers have also found that heavy smartphone use can increase stress, anxiety and depression and exacerbate attention deficit disorders. The constant stream of messages and information from a smartphone can, in fact, overwhelm the brain and make it impossible to focus on any one thing for more than a few minutes without feeling compelled to move on to something else.

The difficulty is that there are often no visual signs of a smartphone addiction – no bulging waistline from over-eating, no mounting bills from a gambling habit or no hangovers from drinking too much alcohol. Yet, the withdrawal symptoms of coming off smartphones are not dissimilar to other addictions. They include feelings of restlessness, anger or irritability, difficulty concentrating, sleep problems or simply craving access to your phone. Often, the only way you’ll realise you are addicted to your smartphone is how you react when it’s out of battery or when you’ve no access to the internet.

Noctor says that the solution to smartphone addiction lies is changing behaviour – rather than seeking technological solutions. “Smartphones are weapons of mass distraction. They are designed to be compulsive and to hack our psychology. People with addictive personalities will be more vulnerable. Using technology targets the same dopamine receptors as alcohol and some people will escape into technology as a way of coping with distress.”

However, like with other addictions, this isn’t an instant cure. And, it can take some time – first to deal with the withdrawal symptoms – and then to find a balanced way to use technology.

“Abstinence isn’t a possibility. It’s like food – it’s everywhere so it’s about managing and negotiating a better relationship with technology. The emphasis has to be on the human element and stepping back and finding your sense of autonomy. What people need to do is to find value in other things,” says Noctor.

He also believes that as a society, we need to develop a more mature relationship with technology and learn to regulate our own desire so that we can use technology for good. “If we had a clean [devoid of pornography, gambling apps, etc] internet, people could still spend nine hours on Youtube. Technology is an interactive medium of communication which depends on self-censorship. We are not going to come offline but we need to take back ownership of our choices.”

Do you have a smartphone addiction?

1) Do you find you’re working late because you can’t complete assignments or household chores aren’t getting done because you are spending a lot of time on your smartphone?
2) Is your social life suffering because of all the time you spend on your device?
3) Do you lose track of what people are saying because you’re too busy checking your phone?
4) Do you conceal or lie about your smartphone use by sneaking off somewhere quiet to be online?
5) Do you feel you are missing out on important news or feel others are having a better time than you if you don’t check your phone regularly?
6) Do you have a feeling of dread, anxiety or panic if you leave your smartphone at home or the battery runs down?

If you answer yes to all or even some of these questions, you need to manage your smartphone use better.

How to better manage your smartphone use

1) Keep an (honest) log of how much time you spend on your phone. There are apps that can track it for you – but keeping a record in a notebook might be more effective.
2) Recognise the triggers that make you reach for your device. Is it when you are lonely or bored? Is it a way of self-soothing when your mood is low? Is it to distract yourself to avoid doing something difficult you have to do?
3) Make a list of other things you’d like to do if you had more time. Set yourself times when you will turn your phone off. Remove social media apps from your phone so that you can only check them when you’re on a computer. Or wean yourself off compulsively checking your phone every few minutes. Try to limit yourself to every 15 minutes and then extend that to every 30 minutes, then once an hour.
4) Start a new activity and leave your phone at home when you do this activity. It could be simply a lunchtime walk, a gym or yoga class. Set family times – such as meal times – when everyone has to leave their phones out of the room. Curb your fear of missing out by doing more things with friends and family.
5) Leave your phone in another room before you go to bed.

Phones Special
- Can mobile phone use cause cancer?
- Medical devices & apps on phones
- Smartphone addiction
- ‘An extension of my arm’
- Monitoring my daughter's phone
- Parents need to lead by example
- Teenagers on the phones in their hands
- How ‘technoference’ impacts parenting
- Spending months playing video games
- Using your phone in the supermarket
- Do you run with your phone?