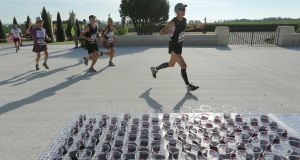 The “Wine on the Line” race takes place on Mother’s Day and all entrants, as the name suggests, receive wine at the finish line. Photograph: Getty Images

To help me to stay focused and motivated in the fourth week of my Get Running challenge, I decided to sign up for a race – an actual race, with actual runners.

Setting a time-bound and attainable goal will help me to keep my training on track and give me something to work towards. Publicly stating this goal has the added advantage of making it more difficult to back out of, which is motivation in its own right.

Motivation largely of the stick variety.

The other half suggests a 4 mile run. Last time I checked 4 miles is greater than 5km and exceeds my target by a whopping 1.43km. There is absolutely no need for heroics here and no need to lose the run of myself completely (pun not excused). A friend suggests a race called “Wine on the Line” where, as the name suggests, all finishers receive wine at the finish line. She tells me the race is on Mother’s Day in Kildare village, all finishers receive a medal and participants can sign up for either a 5km or a 10km race.

She had me at wine.

I provide all the critical information to register for the race: name, address, phone number, credit card and red or white preference. It’s red wine for me, I parted ways with the old lady petrol years ago. A couple of my friends have signed up too so we are making a day of it. One friend suggests meeting the night before at hers for wine as some sort of race preparation. We could not be accused of using performance-enhancing drugs at least.

The midweek running distances have been reduced in favour of a larger run at the weekend. I presume as a recently established eight-minute runner I will breeze past six minutes. I don’t. It wasn’t difficult but I presumed it would be easier for some reason.

I complete the second run before work with relative ease. You heard me, before work. I should point out that I happened to be awake anyway courtesy of my three-year-old son (fondly known as the night terrorist in our house) but I still ventured out of bed before the sun had opted to do the same. The park was pitch black, silent and peaceful and other than a dog walker there wasn’t another sinner about. This challenge is helping me to learn so many new things. I learn, for example, that there are dog collars with flashing lights so that dog owners can see where their dogs are in the dark.

The last run of the week consists of two 10-minute runs. The training guide assures me that if I have all the other runs in my legs, I will be fine. I like the idea that my legs are akin to a rucksack where runs are stored and kept for later use. Two days before the big run I feel myself coming down with a cold. I hope it passes but it doesn’t and within 30 seconds of starting to run I knew I wasn’t up for it.

I complete the first 10 minutes but really had to push myself to do it. I only manage five minutes on the second iteration and feel a bit dejected for not completing the goal for the week. I will try this run again when I am feeling a bit better. I remind myself I did complete 10 minutes and it could be far worse, I could have man flu.

Claire McMahon is following a Get Running programme (irishtimes.com/getrunning) and will be writing a weekly column about how she gets on.
Part 1: You can sit on the couch and get fat
Part 2: The truth is I don’t like exercise
Part 3: Dubious and hopeful
Part 4: Signing up for ‘Wine on the Line’