Kathryn Thomas: I wanted to be a runaway mum, but fear held me back 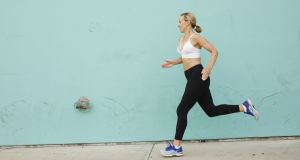 It was a Wednesday morning when I headed for the War Memorial Gardens in Islandbridge. My usual running route was down along the river, out the Chapelizod gate and up into the Phoenix Park. About 6km all in.

It was cold and crisp, the sun was splitting the stones and there wasn’t a breath of wind - the perfect weather for running and yet I was full of fear.

I should explain that on this particular Wednesday I also happened to be 16 weeks pregnant. I had been given the all clear to go back exercising once I had reached the all-important 12 week mark and actively encouraged to dust off my runners by my doctor.

So I had started some home work outs and weekly yoga but the thought of running scared me senseless, it was an emotion I’d never experienced before while exercising.

When my husband and I found out we were pregnant for the third time, it was utter elation followed by overwhelming anxiety

My overwhelming fear was running would somehow harm my baby or - don’t laugh - the baby would fall out.

I didn’t want to put it off any longer so warmed up and fully stretched, I took off down the road. My legs wanted to run but my brain wouldn’t let them. It was an odd sensation because running for me has always been an escape.

An hour, three times a week where I could switch off from he world, let the thoughts come and go, listen to some great 1990’s rock belters and just disappear from the chaos for a little while.

However much I wanted to be a runaway mother, it was fear that held me back from taking to the road during pregnancy.

I’ve talked openly before about our lengthy pregnancy journey which over three years included two miscarriages and many trips to the Merrion fertility clinic under the care of the brilliant Dr Mary Wingfield.

When my husband and I found out we were pregnant for the third time, it was utter elation followed by overwhelming anxiety that things would go wrong again.

When I think back to that time, I remember feeling as though I was floating through that first trimester, afraid to let myself believe I was actually pregnant. I didn’t suffer morning sickness or nausea which in a way almost made it worse because I really didn’t feel pregnant. I was just worried all the time.

I had weekly scans where I would hear the baby’s heart beat at which point a wave of relief would wash over me. This would settle me for a few days only for the anxiety to build again.

It was probably the longest three months of my life. Under the advise of my doctor, until I got to the 12-week mark, I had stopped going to the gym, lifting weights and running.

I’ve always thought women were fantastic and now as a mum, I have an even greater appreciation for the female form

All my usual foolproof techniques for stress relief were gone. During this time I ate normally, walked daily and took up pregnancy yoga which helped massively in the absence of my usual fitness routine.

It gave me much-needed time out to actually stop and try to think of the miracle that was going on inside my body and channel all the positive thoughts. I couldn’t recommend it highly enough to anyone who is pregnant or trying to conceive.

But when it came to running I just had a mental block. And I suppose the point I’m trying to make is that I understood for the first time, the mental blocks people feel when it comes to exercise and how difficult it can be to figure out where to start or how to get back on the wagon again.

Even though I trained from 12 weeks onwards and kept really fit and healthy throughout my pregnancy, running still evaded me. Every time I tried, the same thing happened. A creeping anxiety. A big wall. Shut down. Eventually I realised it was nothing to do with running and all to do with my fear about losing another pregnancy.

Fear holds us back in many walks of life and in many others it is the driving force for change. We all know somebody in our lives who had a major health scare and it was the fear of the worst possible outcome that made them give up smoking, lose weight or stop eating crap.

It is how we channel and face our fears that dictate the changes we make in our lives. I had to be patient and accept that when it was the right time to go back running, it would happen. And it did. About six months after Ellie was born.

I had to work really hard at building up my mental stamina again but I got there eventually. She’s one now and I can honestly say I’ve only started enjoying my running in the past few weeks.

I’ve always thought women were fantastic and now as a mum, I have an even greater appreciation for the female form - everything it does, all those intricacies.

My body grew, nurtured and protected our little girl and for that I will be eternally grateful. Equally, I appreciate that the journey took its toll on my confidence for a while and manifested itself in the way that it did.

But I’ve also come to realise mental blocks over time can actually become building blocks which we learn from. And that sometimes you just have to keep on running.

A day of fun, food and fitness

The Fit Fix with Kathryn Thomas is on in the Pavilion at Leopardstown Racecourse on Saturday April 13th.

Thomas says the day of fun, food and fitness is “for everyone whether you’re already kicking ass or just need a kick start.”

Classes include cardio jam session POUND which is inspired by the intense energy of playing the drums, boxercise, bands and bells and metafit.

Headline speaker on the day is online fitness guru Brian Keane who will be joining Thomas for a discussion on how we rewire your mindsets to achieve your fitness goals.

Bring along any athletic gear or shoes to raise money for a great cause. Tickets which include breakfast and lunch are €99 from pureresultsbootcamp.com