Will an opt-out register improve rates of organ donation? 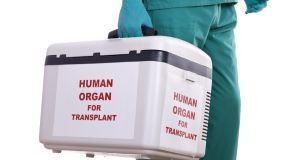 The Government is proposing to introduce an ‘opt-out’ approach to organ donation. Photograph: Getty Images

The Government is planning to introduce an opt-out register for organ donation but will it improve numbers of organs donated?

What is the Government proposing regarding organ donation?

The Government is proposing to introduce an “opt-out” approach to organ donation. This would mean that a deceased person would be deemed to have consented to donate their major organs (kidney, liver, pancreas heart and lungs) unless the person had specifically “opted-out” of donating their organs. Under the proposed new scheme, the next-of-kin will still be consulted and if they object, the donation will not proceed. This is called a soft opt-out approach to organ donation.

How will this differ from the current system of organ donation?

Under the current system, the next-of-kin of a deceased person whose organs are suitable to donate, is asked to consent to the organ donation. This is known as opt-in or express consent. If they decline, the organs will not be donated even if the deceased person carried an organ donor card or had indicated the wish to be an organ donor on their driving licence.

Why is it being changed?

The system is being changed in the hope that more organs will become available for donation through the soft opt-out scheme. Ireland is one of a few EU countries not to already have an opt-out system.

Will it improve the numbers of organs donated?

Well, this is the big question. Those in favour of introducing the opt-out system believe it will as people will no longer have to actively become organ donors by either carrying an organ donor card or signing up for it on their driving licence. This argument is based on the assumption that next-of-kin will then give their consent to the donation of organs from their family member based on the fact that that person didn’t actively opt out of donating their organs.

In the Department of Health public consultations on the introduction of an opt-out system of consent in 2013 and 2017, several medical organisations pointed out that increased organ donation is determined by good transplant and organ donation infrastructure as well as an opt-out register.

Mark Murphy, chief executive of the Irish Kidney Association believes the role of a specialist nurse for organ donation is crucial. He points to the UK National Potential Donor Audit which found that the rate of consent was almost 70 per cent when a specialist nurse for organ donation worked with the family of the deceased person. This figure dropped to 27 per cent when such a specialist was not present. The association would like the Government to introduce opt-in and opt-out elements to the proposed organ donation register. The association also suggests that a family is much more likely to consent when they know the wishes of their loved one rather than presuming they would have wanted to donate their organs based on not having opted out.

Some commentators have also pointed to fact that the current system is based on altruistic giving which will be undermined by legislation for presumed consent. Other commentators suggest that some people might in fact actively decide to opt-out to protest about other Government health policies.

One practical solution would be an online opt-in, opt-out register with options to notify family/friends by email or text of the person’s wishes.

Minister for Health Simon Harris got Cabinet approval to publish a draft of the Human Tissue Bill in 2017 of which the soft opt-out register for organ donation is a part. It now awaits debate in the Dáil before legislation can be written and introduced. Whatever system is introduced, a clear public information campaign about the register and the life-saving potential of organ donation will be required.

Organ Donor Awareness Week, which takes place from March 30th to April 6th, is organised by the Irish Kidney Association (IKA) and supported by the Organ Donation Transplant Ireland (ODTI).

An Post has launched a stamp featuring a symbolic hourglass timer carrying the message ‘Organ Donation Saves Lives’. The stamps are available nationwide, along with organ donor cards. The cards can also be obtained from pharmacies, GP surgeries, the Irish Kidney Association website, phoning (01) 620 5306 or free texting the word DONOR to 50050.

Read: Living donations: who can give, what, how and where?