‘I find myself strangely looking forward to the next run’

Running diary: ‘It’s week five of Get Running and something has clicked into place’ 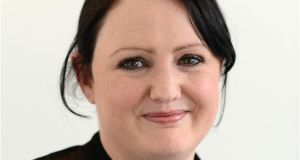 Claire McMahon, in an effort to lose weight and to get healthier, has signed up to the Get Running beginner’s course. Photograph: Dara Mac Dónaill / THE IRISH TIMES

One of my motivations for participating in The Irish Times’ Get Running challenge is to lose weight. This challenge coincides with my annual booze-free January or dry January as it is better known.

I was hoping that a combination of exercise, no alcohol and eating a few less pies would have manifested into a win on the scales by now. To say the scales haven’t budged would not be true. The scale has been budged all around the floor in an attempt to budge the actual number that the scale reports. Anyone trying to lose weight knows that up to a precious pound can be lost by repositioning the scales on the floor.

For some reason, the lower number is always more believable and most definitely more acceptable.

While the number on the scales has only budged marginally since the start of the challenge, I have noticed a change in my physical fitness. Something has clicked into place this week and the runs have become much more comfortable.

Don’t get me wrong, the runs still require significant effort and I still have to push myself but I am finding them much easier. I look back to the start of this challenge and remember how difficult I found the four and five minute runs. I can now run 15 minutes pretty comfortably (pats self on back) and find myself strangely looking forward to the next run and the next challenge.

The first series of the three Irish Times Get Running programmes is designed for absolute beginners and it’s working for me because it is both gradual and attainable. I find that gyms are pretty inaccessible for exercise beginners. You only have to examine the names of the exercise classes that feature terms such as “extreme”, “burn”, “blast” and “power” to know they are not for novices.

I genuinely think there is a market out there that caters, not to people who want to tone what they already have but for people who aspire to have something to tone.

An exercise class called “beginners spin” caught my eye once for obvious reasons. I was tying my laces when the instructor surveyed the room, saw a large number of familiar faces and stated: “Everyone here has done this before, right? We might as well do the normal spinning class?”

Ten minutes into the warm-up I thought I was going to die. Spinning is hell on earth; why anyone would undertake this activity voluntarily is beyond me. When the trainer turned their back to up the music tempo for the real class to start, I legged it, as fast as my wobbling legs could carry me.

The first run of the week consists of an 11-minute slow run followed by a four-minute walk, repeated two times. I can definitely feel the extra distance and find myself clock watching a lot but I get there.

I repeated the final run from last week when I was sick so there is an extra run in my legs as us runners like to say and I decide to skip this run.

The last run consists of a five-minute slow run followed by a five-minute walk followed by 15 minute slow run. It feels like I am running for a long time but the 15th minute finally arrives and I complete this run feeling elated. So elated in fact, that my resolution to give up drinking in January makes it clear that I need to take up drinking from February to December.

– Claire McMahon has signed up for The Irish Times’ free Get Running series and will be writing a weekly column about how she gets on.

Claire McMahon is following a Get Running programme (irishtimes.com/getrunning) and will be writing a weekly column about how she gets on.
Part 1: You can sit on the couch and get fat
Part 2: The truth is I don’t like exercise
Part 3: Dubious and hopeful
Part 4: Signing up for ‘Wine on the Line’
Part 5: Looking forward to the next run