Every week I would run 40km, and every week it would take longer – I needed a plan 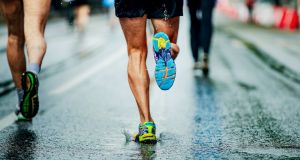 I’ve been running for about five years. I started because I wanted to get fitter and I carried on because it worked. When you’re in your 50s, with a job that is mostly sitting on your arse, you have to do something.

Running suits my lifestyle. I live in London, about 14km (nine miles) from work, so when I’m feeling energetic I can run all the way there in about one hour, 20 minutes. The city being what it is, I couldn’t get there much faster by public transport. Other days, I can squeeze six or seven kilometres into my lunchbreak.

In a good week, I can notch up 40km without totally neglecting my wife, stepkids, cat and dog. But lately I’ve been having doubts.

One of the nicest things about doing a sport – for me, at least – is the knowledge that you’re getting better: that you’re running faster, or longer, or more elegantly.

Too many outings are just a little bit slower than the one before. I’ve got in the habit of signing up for races and then not turning up since I know I’ll disappoint myself. Which is why, one chilly morning, I find myself on an appallingly steep hill, running up and down it as fast as I can before the sun is up. It’s why, on another pre-dawn morning, I am in a deserted park, sprinting and resting, sprinting and resting until I think my lungs will burst. And it’s why, for the first time in my life, I buy a barbell and start watching weightlifting videos.

There’s a plan to all this and it comes from Jenny Tomei, the personal trainer I’ve asked to get me out of my rut. A keen runner herself, Jenny has spent more than an hour quizzing me about how I eat (okay), how much I sleep (not nearly enough) and how much I drink (the less said, the better), as well as how much and how fast I run, how I warm up and what other exercise I take. She has also watched me run, so she can look at my technique.

Apparently, although it’s okay to kick up my heels as high I do – Mo Farah does it – I shouldn’t bounce quite so much. Together we come up with a tough but achievable target – that in two months I will run my fastest-ever 16km. It’s a goal that appeals because as well as being a classic distance in its own right – 10 miles in old money – it’s a bit more than my usual long runs. After that, I tell myself, going back to 14km will be a doddle. And all I will have to do is put myself through hell for eight weeks.

I exaggerate. Jenny doesn’t ask me to do anything I can’t, but she does push me harder than I would have pushed myself. Which, I suppose, is the point. My new schedule features runs of 10-15km on Monday and Friday, separated by two much shorter outings that emphasise hill climbs and sprints. To stop me getting bored over the weekends, there’s that weightlifting: 50 Romanian deadlifts, which involve raising a 60kg barbell, straight-legged, from my shins to mid-thigh. This should do wonders for my hamstrings, glutes, lower back and hips. There’s a lot I don’t like the sound of – but that has been true of every running plan I’ve tried to follow.

Infuriatingly, most experts insist that if you want to get faster over long distances you must first get faster over short distances. In other words, you have to do a lot of sprinting – even if, like me, you hate it – or mix it with slower running in what’s known as fartlek. Jenny’s plan has plenty of this, too, but this time I’m determined to follow the plan properly, rather than ignore the bits I don’t like.

What I do like about this plan is that it has been built for me. Like all running programmes, it starts gently then ramps up, with the longer outings getting longer and faster, and the shorter ones featuring more sprinting and less resting. But having two long runs during the week is a big deviation from the standard routine of one long one on a Saturday or Sunday. It’s a great fit with my combination of chronic insomnia and runnable commute. That’s something you don’t get off the peg.

My motto for the next few months comes from Nietzsche: what does not kill us makes us stronger.

Although I’ll never enjoy sprinting, which is why I haven’t done it since school, I discover I can do it, and it has the great virtue of being over quickly. When I mention this to Jenny, she cuts the recovery time I’m allowed between sprints. I’m happy with this. If I have to be out in the cold and dark, I would rather be running than just standing there and shiver-sweating. There’s another thing I like about her plan: she wants me to eat more. Although I could do with losing a few kilos, she doesn’t approve of my habit of running on an empty stomach. Even first thing in the morning, she says, I need something light and easily digested.

I’m not entirely convinced, as eating shortly before exercise makes me worry about coming over all Paula Radcliffe, but on the mornings I’m running I cram in a porridge bar or a piece of toast and peanut butter the minute I’m up.

It works: my long runs seem easier than they used to, presumably because I have some fuel for my muscles. And though I struggle with my speed, it’s not because I’m too slow. My target pace – which we call the “race pace”, though the only person I’ll be competing with is my old, slow self – is about five minutes, 10 seconds a kilometre, which would not be fast for many seasoned runners. It’s about 20 seconds quicker than my previous best over the same distance.

Perhaps, because of all the sprinting – when I go flat out, with no attempt to keep anything in reserve – I keep running too fast, however much I try to slow down. Soon I am averaging 5min 9sec on the long runs, then 5:03 and 5:02. These aren’t the full 16km, and I usually feel close to collapse by the end, but I am confident that once I learn to pace myself, I will hit that 5:10 target for the full 16km, and probably beat it.

And then it all goes bosoms-up.

Three weeks before race day, I get a sharp pain in my groin. I cut that run short, have a few days off, think things are getting better . . . and then, as I’m starting another set of sprints, I get that stabbing pain again. It’s there whenever I lift my knee high – not just when I’m running, but also when I’m stepping in and out of my pants. A physio tells me I’ve injured my hip flexors, high up in the inner thigh, then gives me a painful massage and prescribes a lot of stretches and exercises that will eventually correct the problem and make me less injury-prone.

But that’s for the long term. In the meantime, that 16km race is not going to happen. When this sinks in, I spend several hours feeling angry, frustrated and sorry for myself. Then I pull myself together. This setback is annoying, but that’s all. It’s not the first injury I’ve had, and this training has shown me that, no, I’m not doomed to get slower and slower – at least not just yet. I sign up for a half-marathon in the spring, by which time I plan to be fully healed and race-ready. And I text Jenny: “I need you to do me another plan . . . ” – Guardian