Bowled over by the many virtues of cricket

Once the most popular team sport nationwide, the game is enjoying a new lease of life in Ireland 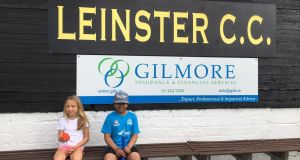 Alex Feeney and Sahas Sawant of Leinster CC. Last year 27,000 children in Ireland were introduced to the sport through its Cricket Ireland’s cricket schools programme.

Before I signed my kids up for cricket it seemed bewildering to me and I had it down as a game for panama-hat-wearing posh guys who could stand around for days doing nothing.

Two years on and our summer months are dominated by the sport which gets everyone out the door before the TV goes on.

In the 1850s cricket was the most popular team sport in Ireland, though you would never guess that today . Although it may have taken place on rich landowners’ property, it was strongly rooted as a people’s game.

There were active clubs in every country with records showing the first club in Ballinasloe, Co Galway, in 1825. The oldest surviving club is Phoenix in Dublin; in 1838 it was provided with land in the Phoenix Park where it remains, in a different location, today.

The Land War of the late 19th century and the wave of cultural nationalism that accompanied it, along with the political demand for Home Rule, meant cricket became associated with British imperialism and became a minority pursuit in most parts of Ireland. However it remained a minority sport in the North and in pockets of the Republic, such as Dublin and Cork.

Today there are upwards of 50,000 now playing in clubs, schools, universities and social [non-league] teams. This compares to 14,500 people playing in 2007, the year Ireland defeated Pakistan at the International Cricket Council (ICC) World Cup which brought a lot of renewed notice to the sport in this country.

Cricket Ireland, the governing body, now has five provincial strands (Connacht Cricket was established in 2010 and there are two for Northern Ireland), and is focusing on making the sport more mainstream and bolstering youth participation.

Last year 27,000 children in Ireland were introduced to the sport through its cricket schools programme. Only one in five who play cricket regularly are female, though this is up from nine per cent six years ago.

According to Eddie Lewis, former Cricket Leinster chairman, the growth in cricket in the Leinster counties, and across Ireland, is mainly because more people have come to work and study here from cricket-loving countries since the year 2000.

“The welcome growth of the game is being driven from people who have moved here from South Asia countries such as India, Bangladesh and Sri Lanka, and also New Zealand, Australia and South Africa. The changing face of cultural Ireland can be seen in the growing number of players and umpires from these countries and in the future we will be depending on that talent coming through to field our national team,” he said.

Lewis, who along with cricket historian Ger Siggins, has written a soon to be published book celebrating the centenary of the Leinster Cricket Union (“100 years Not Out – The History of Cricket in Leinster), says more young people (especially girls) taking up the sport and a rejuvenation of women’s cricket is also boosting numbers.

Munster Cricket was formed in 1956 and has 41 affiliated clubs and Cricket Ireland says there has been renewed interest in the fast-growing areas around Cork, Limerick, Waterford and Tralee.

The recently appointed manager of Munster Cricket, Joe Moynihan, says it’s a growing sport with a few clubs popping up next year that have been given access to grounds by the council, and that a shortage of grounds is one of the biggest challenges in the region.

“I visited a summer camp with 54 children under 13. There is a market here for more cricket and soon two development officers will start working with Munster Cricket to help renew interest in the sport”.

Connacht Cricket Union has nine teams registered and saw sides enter the national cup competitions for the first time in 2012 with new clubs, such as Ballyhaunis Cricket Club, emerging and plans afoot to kick off an underage league.

“We have got young families joining whose interest has been caught by seeing tournaments on satellite TV, but there is insufficient youth interest and it is not visible enough for younger people,” says Ted Turton, president of County Galway cricket club.

“GAA is king in these parts and we need more support to develop the huge untapped potential in the area. Hurling is a great game but there is room for us all.”

He says there is a big shortage of grounds, with County Galway CC the only club in the province that owns its own grounds outright.

So, why should you sign your kids up for the world’s second most popular sport (after soccer)? My children play at Leinster CC in Dublin where training is well organised. The younger kids start off with soft ball cricket, with technical coaching through games. It’s very low pressure and the focus is on gaining an appreciation and having fun. In the 5th and 6th class group the training gets more structured and progressively more competitive as you move into 1st and 2nd year, and beyond.

Sunit Somani moved to Ireland from Mumbai six years ago to take up a job with Ernst & Young and has signed his five-year-old son, Avyaan, to play in Leinster CC. He says he was happy to find cricket was so well developed here.

“I was so pleased, and surprised, that cricket was taken so seriously in Ireland and is so well organised for the young kids,’’ he said.

Stephen Kenealy, youth development coach at Leinster CC, says there are skills your child will pick up in cricket that it may not in other team sports.

“Cricket is great for in-built fundamental movement skills, along with specialist skills like bowling and batting. And as they get older kids get to learn about being in a team game but also taking responsibility as an individual. You play in a team, for a team, but perform in an individual context which teaches how to handle pressure, and also resilience, because they will be losing more than winning’.

Mark Forbes, who helps with coaching the under 9s in Merrion Cricket Club in Dublin, says cricket is attractive to many children because you are not stuck out on the wing like other sports, but rather everyone gets a chance to get the ball.

“Although it is athletic, it’s extremely accessible and anyone can play, especially at the grassroots level. It is highly skilled and not dependent on how fast your can run, or how strong you are, “ he says.

He added that not being a contact sport it might appeal to children who dislike rugby or football, and also there are fewer injuries.

Forbes says there is a big social side to the game as, unlike other sports, there is time to chat and bond with people from different backgrounds, countries and age groups.

Despite a stuffy image in the 19th century, cricket was for everybody – the landowner, the local butcher, tenants. Today the mantra of Cricket Ireland is to make cricket mainstream and perhaps in years to come it will again be a big team sport in Ireland.

Cricket has a lot to offer, for serious and social players and can carry on playing well into your twilight years. It is also one that girls and boys can genuinely play together in the early years.

Although the season is now over, if you sign up your child next April you will see that it’s quite an easy game to grasp, and a fun way to teach patience and resilience.

And another bonus is that when you hear the results of Ireland playing the One-Day International (ODI) series against world champions England in September, 2020, you won’t be stumped, like I used to be. The Ireland men’s team are currently playing in the ICC World Cup Twenty20 Qualifiers in Abu Dhabi.

The wicket – 3 vertical stumps and 2 bails.

Overs – Each set of six balls bowled is an over.

Rules – Two teams with 11 players, take turns to bowl and bat. When a team is batting this is their innings They try and score as many runs as they can by hitting the ball around an oval field and running between two wickets while the fielding team try to get the batsmen out by hitting the wooden wicket or catching a shot without bouncing (among other ways).

When ten players of the batting team is out they switch sides. If you the ball goes over the perimeter you give up four runs, six if it bounces outside.

Informal for kids, the game can be of indeterminate length and is organised to ensure that everyone is involved and is played with a soft ball and without protective gear.

T20 where each team can bat for 20 overs of six balls is the shortest and most popular form of the sport.

The one-day game of up to 50 overs which is the mainstay of club and international cricket.

Multi-day cricket which can take up to five days in Test matches. Only 12 countries play at this level and the International Cricket Council (ICC) approved Ireland to play Test cricket in 2017.