Beginning running after 50? It’s never too late to shine 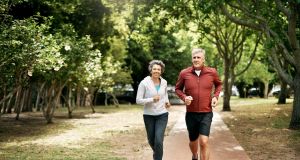 The new study’s finding’s suggest it may not be too late for us to become healthier and, if we so choose, late-blooming athletes. Photograph: iStock

Men and women who start running competitively when they are in their 50s can be as swift, lean and well-muscled within a decade as competitive older runners who have trained lifelong, according to a buoying new study of the physiques and performances of a large group of older athletes.

The findings suggest that middle age is not too late to take up intense exercise training and begin banking many of the health and aging benefits of being an athlete.

Already, a wealth of research indicates that older athletes – known as masters – age differently than older people who are sedentary. Past studies show that competitive athletes in their 60s, 70s, 80s and even 90s tend to have more and healthier muscle mass, stronger hearts and much less body fat than non-athletes of the same age.

In essence, masters athletes represent “the model of healthy aging”, said Jamie McPhee, a professor of musculoskeletal physiology at Manchester Metropolitan University in England, who led the new study. “They have fewer long-term health conditions” than aging non-athletes, he said, “take fewer medications, have fewer hospital or medical visits, and their physical function is excellent”.

But many past studies of masters athletes have looked at participants, mostly men, who have trained for decades. Whether those of us whose work and family commitments, disinterest, ill health or long-term procrastination discouraged us from being serious competitive athletes earlier can start training in midlife and catch up to longer-term competitors’ performance and health has not been clear.

So, for the new study, which was published in Frontiers in Physiology, McPhee and his colleagues decided to find out. For more than a decade, he and his colleagues already had been studying the muscle and bone health of masters athletes, especially runners. Each of these runners had been at least 60 when he or she joined the study, and the researchers’ data showed that most displayed substantially greater muscle mass – although not necessarily bone density – than less-active older people.

Now they turned to this existing trove of data to look into whether it mattered, for health and performance, when athletes started training. The scientists focused on older distance runners for whom they already had extensive data about body composition, including their bone densities, muscle mass and body-fat percentages, as well as answers to lengthy questionnaires detailing how often and intensely the athletes had trained in every decade of their lives, beginning at the age of 18.

The records also tracked each runner’s times and placings in major races from the past two years. The runners had competed in a variety of distances, from the 800 metres to the marathon.

The scientists now gathered records for 150 of these masters runners and divided them into two groups, depending on when the athletes had begun training. One group, the early starters (mostly men), had been racing throughout adulthood, having often begun running as teenagers. The latecomers, on the other hand, had not begun training and racing until they were at least 50, leaving them 20 or 30 years behind the early starters. Interestingly, while both groups included men and women, the latecomers featured a much larger percentage of women.

The researchers also gathered data about the body compositions of 59 inactive older men and women from a separate, long-term study of health and aging to provide a control group.

Finally, the researchers compared the health and performance parameters of the runners in each group to one another and to the controls.

And they found surprisingly few distinctions among the athletes. The runners’ finishing times barely differed, whether they had been training for 30 years or fewer than 10. Both groups of runners also showed about 12 per cent greater muscle mass in their legs than the inactive control group and about 17 per cent less body fat.

Only with bone density were the latecomer runners at a disadvantage. Their spinal bone density tended to be lower than among the control group or the long-term runners (whose spinal densities were comparable). The reasons are not clear, McPhee said, although they could relate to this group’s gender makeup. The upshot is that it does seem to be “possible to catch up with those who have trained several decades longer,” McPhee said.

There are caveats, though. This study did not look at sports other than running or at markers of health apart from muscles and bones. It also did not delve into participants’ genetics or their physiques before they joined the study, either of which could have uniquely fitted them to become older athletes and might not apply to the rest of us.

Perhaps most important, the runners trained often and intensively once they took up the sport, working out five or six times per week, usually with a running club. “They were very committed to training,” McPhee said.

But even with these provisos, the study’s findings are encouraging, he said, suggesting that, whatever our age, it may not be too late for us to become healthier and, if we so choose, late-blooming athletes.