Lynn Ruane: Since the 2008 crash thousands have found sanctuary and community in their local gyms 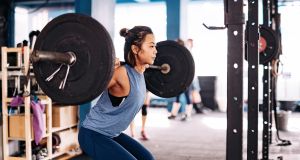 Before austerity or after austerity, the above applies, just at varying levels. Rich in all the things we need to survive the day and poor in everything we need to live. The fabric of our shared existence was already scarce of thread. In the years following 2008, it felt threadbare. There is no sense that you (the State) is in this with us (the community).

We march, we protest, we beg and we scream but the autonomy and control we once thought we had in our communities has been prised from our hands and our hearts as if it was never ours to begin with.

Shutters closed on much-needed services and social welfare recipients increased, as the working class became the mostly non-working class, through no fault of own. No transferable skills, no safety net and no savings accounts. We, well I, felt powerless to lift the heavy weight of the State so instead looked around for what I could control. Well, kind of control.

My appearance. If I look well, if we look well, no one will know we are sinking. No one will know that I can’t really afford the runners on my feet and Under Armour brand on my back. Behind every gym selfie and perfect dead lift is a sleepless night and an unpaid bill. The only thing you (the State) can’t take from me.

Fit is the new autonomy.

Construction sites empty, factory workers sign on, yet gyms fill up. For many, the only thing that felt natural to do during the last decade was to turn economic weakness into physical and mental strength. As the thread of our professional and educational communities shed, we found refuge in a new community that was forming over by the squat rack.

Fit is the new community.

At every stage of life we look for places where we belong and over the last 10 years thousands have found belonging in boot camps, gyms and fitness studios. Austerity made us feel invisible, nameless – but just hearing the fitness instructor say your name in a packed class made you feel seen again. “You’re looking well” replaced “haven’t you done well for yourself”.

Fit is the new validation.

Think back to 2008: middle-class, white men using mind not body asserted their power to cut the working class to the point of poverty. The working class, women and minority groups, who use their bodies in their work – domestic work, labour, care-work, construction, factory work, sex work – lose everything; those who have no reason to put their bodies to work remain in employment and in decision-making roles. It’s as though a further loss of agency from 2008 onwards pushed us into using our bodies yet again to find purpose. To find value. To find power.

In our new place of sanctuary, body and mind align to feed the State’s requirement of us to be resilient. A resilience that’s been forced by neoliberalism and austerity, but while we are here we rebuild ourselves and our communities, as individualised gym users are replaced by communities of gym class goers. No more strangers walking past each other in a sterile gym environment, and no more male-only weights sections. On any given day you can walk into places such as Kickstart Fitness and be surrounded by 50 individuals working together, transforming their collective trauma into strength, friendship and encouragement. The world outside this space is still stacked against us, our days will still reveal the decay that has austerity has left behind.

However, communities are no longer only built in cul-de-sacs and community centres. Communities are organically repairing and growing as we lunge and lift and as we share nutrition tips and recipes for healthy snacks. Women are collectively smiling as the man coming off the bench press attempts to lower the weight for the woman about to use it. Gender balance is quickly reconfigured as the woman says, “You’re okay, mate, it’s heavier I am going.”

Throughout the last decade I have trained in the same space. We have helped each other and championed each other. We have raised money for charity together and volunteered together. We have held each other together through multiple deaths in our shared communities and we have nudged each other out of bed when everything felt too much. Our meeting point always the same – the gym; our outcome always the same – connection. No longer individuals trying to take control of bodies in a chaotic 10 years, but a community engaging together on what we need to do change the world around us.

– In Our Time is South Dublin County Council’s Public Art Programme 2016 - 2019 under the Per Cent for Art scheme. Sarah Browne’s Public Feeling explores the health impacts of austerity on the individual and collective body, the politics of “resilience”, and considers the gym or leisure centre as a space where the bodies of citizens are trained, transformed and cared for. Public feeling was realised as a series of participatory performances in Tallaght and Clondalkin Leisure Centre this month, staged in the format of fitness classes. It will be staged again next Sunday (November 24th) in Clondalkin Leisure Centre – 2.15pm, Fallout (Circuit); 4.30pm Resilience (Aqua). Tickets are €7, see publicfeeling.org or incontext4.ie