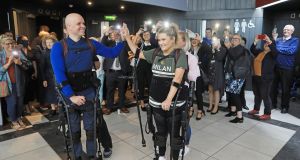 Mark Pollock (L) and Jennifer Hester (R) Dublin. A chance meeting with Pollock at DCU led to Hester trying out an exoskeleton, a robotic frame strapped to the body which enables movement. Photograph: Julien Behal 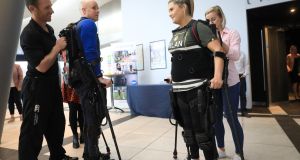 Jennifer Hester has an extraordinary can-do attitude to life. The 35-year old Dubliner suffered from a spinal cord injury following surgery for the removal of a brain tumour in January 2017. Post-surgery, she was paralysed from the chest down and told to prepare herself for spending the rest of her life in a wheelchair.

“I was aware of the risks of spinal surgery but I never thought it would be me. Following two months in Beaumont Hospital, waiting for a bed in the National Rehabilitation Hospital (NRH), I then threw myself into physiotherapy,” she explains

Three weeks into her three month stay at the NRH, Hester went to the Inter Spinal Unit Games in the UK and came back with a silver medal in archery. “I’d never done archery before but by going to the games, I got to try lots of different sports and met lots of different people.”

Hester now says that partaking in these competitions was a turning point for her. “Before, my plan was to get as independent as I could in the wheelchair but after the games, I became very determined to walk again,” she explains.

Initially, she got some use back into her left leg and had a splint on her right leg which enabled her to use a walking frame. A chance meeting with motivational speaker and endurance athlete Mark Pollock at the gym in Dublin City University (DCU), led to her trying out an exoskeleton, a robotic frame strapped to the body which enables movement.

“I felt very secure in it. There is a great feeling of standing up without grabbing onto rails and there is somebody behind you monitoring you all the time,” she explains. Hester joined Pollock in the official launch of the exoskeleton programme at DCU in September. The physiotherapist-led service offers free sessions of supported walking to people with reduced mobility due to paralysis from a spinal cord injury, stroke, traumatic brain injury, multiple sclerosis or Parkinson’s disease.

Since using the exoskeleton, Hester has regained strength in her right knee and hip which has allowed her to replace the full length splint with a new splint which extends from under her right knee to support her ankle and foot. She can now walk short distances using crutches. “I train four times a week - one to one with my physiotherapist and I do strength training at the Irish Wheelchair Association gym,” she says.

Two years after her surgery, Hester returned to work three days a week as a bank official in her former workplace. “I’ve a good circle of friends and a good social life. In the beginning, I was conscious of being the only person in a wheelchair on nights out but now, the chair is part of me. I travel more now than I ever did.”

In May, 2019, she did the Tall Ships challenge with Spinal Injuries Ireland, sailing from Cork to Southampton in five days. “It was one of the best things I ever did. The ship was completely accessible.”

Buoyed up by her achievements, Hester has decided to partake in the 5km Run in the Dark. More than 16,000 people are expected to take part in large Run in the Dark events on Wednesday, November 13th in Dublin, Cork, Belfast and volunteer-led fun runs in Athlone, Ballina, Galway, Inch Beach, Kenmare, Kilkenny, Limerick and Wexford. For more details and to register, see runinthedark.org.

“I go out in the wheelchair along the coast to train and I am looking forward to taking part with family and friends,” says Hester. “Not only to support the Mark Pollock Trust and the amazing work they do, but to reach another personal goal and keep on pushing my own boundaries.”

She adds that living life to the full and being included in such amazing events allows her to forget about her disabilities and focus on her abilities.