Emma Barnett’s book Period. It’s About Bloody Time is a clarion call against periods being seen as gross, dirty or weird 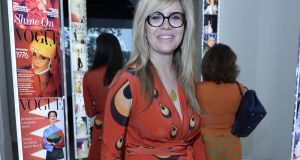 Emma Barnett: ‘If men were tasked with producing the next generation, I think everyone would have a gynaecologist.’ Photograph: David M Benett/Getty

In broadcaster Emma Barnett’s book Period. It’s About Bloody Time, she offers an exhaustive – not to mention exhausting – compendium of the ways periods are described in the everyday vernacular.

Among them are: sinner’s juice; got my Mary; special friend; auntie is visiting from Argentina; code rouge; up on bricks; shark week; on your redder; granny pants week; Liverpool playing at home and my personal favourite, cardinal has his hat on.

Women are still not empowered to deal with so many things.

We have come up with literally hundreds of euphemistic ways to describe periods without actually using the word “period”, and Barnett wanted to know why.

Realising that a bizarre taboo around menstruation still exists, she decided to do a deep dive into why periods are airbrushed out of mainstream society, not to mention how periods are holding women back in every aspect of their lives.

I ask Barnett what her favourite menstrual euphemism is: “I think I used to say, ‘I had come on’, or that I was ‘on the blob’,” she smiles. “One of the favourite ones I unearthed while writing the book, from a friend, was the ‘cotton unicorn’. The only thing I think we can come up with more names for is sex, or body organs. It’s quite telling, isn’t it?”

The end result, Period. It’s About Bloody Time (HQ/Harper Collins), is an enlightening, stigma-bashing clarion call against the cultural conceit of periods being gross, dirty or weird. By turns witty, shocking and humorous, Barnett also relays her own personal experiences of periods, from the celebration of her first one to her own battle with endometriosis. It was a battle that saw her “sleepwalking” towards infertility, mainly because she believed she had to put up and shut up during her time of the month, and didn’t investigate the reason for her painful periods for several years.

“I think every woman should have a gynaecologist,” Barnett notes. “Women deserve decent gynaecological health services, but they’re just not prioritised.

“On [BBC entrepreneur series] Dragons’ Den, Peter Jones was pitched a product [pertaining to periods] and he thought it was too niche,” Barnett continues. “For women to be made to feel like that is gaslighting, like they’re mad to do anything about it. We are tasked to bleed for half our lives and we’re supposed to wander around during it as though we are completely fine.

“If men were tasked with producing the next generation, I think everyone would have a gynaecologist, and it would be the most mainstream thing. The pain would be a badge of pride.”

It’s perhaps an unusual topic for Barnett’s first book, given her foremost reputation as a political interviewer. The Times UK called her the BBC’s new rottweiler, given that she has mastered the fine art of the incisive and rather muscular interview (Jeremy Paxman recently named her as his favourite political interrogator). So why, in such a politically fascinating time, did Barnett decide to write about our cultural squeamishness around periods?

“You need to be a certain character to deal with the facts and I’m that type of character,” Barnett reasons. “I like awkward, difficult conversations. I look forward to taking people on about this. I spend my working life talking about Brexit and to figures of power in the UK, yet on the home front we are still not dealing with this. Women are still not empowered to deal with so many things. Even if they do talk about periods, they can sometimes be laughed at and not taken seriously.”

Barnett, who presents her own show on BBC Radio 5 Live and Late Night Women’s Hour on BBC Radio 4, unwittingly became the first person to announce she was menstruating on live TV.

“Nick Ferrari and I did a show on Sky News called The Pledge, and the format was to discuss a topic that caught your eye that week,” explains Barnett. “A company in Bristol was trying out the concept of menstrual leave and I mentioned that I had an illness where I had difficulty with my periods. I mentioned, ‘it’s really relevant to bring this up, as I’m going through this right now’. Nick completely played his role of looking like he wanted to die and vomit. Rachel Johnson [UK journalist] was on there too and she looked shocked that I’d brought it up, while Graeme Le Saux [retired footballer] just didn’t know what to say.”

The episode, which went viral online, gave Barnett plenty to mull over. She decided to delve into menstrual health further, and soon became shocked at what she found. Among her most outrageous findings was the revelation that when Pope Benedict XVI made a visit to Poland in 2006, the national broadcaster banned tampon adverts for the duration of his stay. Female pilots were taken off the job in the second World War if they reported period pain. And as recently as 2016, Alisha Coleman, a US-based 911-phone operator, lost her job after she leaked blood on her office seat. Fitness trackers have only recently thought to add a “menstrual tracker” feature – one that many users would doubtless find useful.

In India, Arunachalam Muruganatham created a machine that produces affordable sanitary pads for millions of Indian women who had previously used leaves and sand to absorb period blood. His invention didn’t go down too well with his wife, who essentially disowned him.

In the book Barnett also writes about the period poverty that blights several thousand women in the UK and beyond, who can’t afford the sanitary protection that facilitates a worry-free trip to school or work (in the UK, tampons are taxed as a luxury, and are certainly not freely available in public toilets in the way that soap and toilet paper is).

In Ireland, we are getting better at tackling period taboo. Research released by Plan International Ireland found that 61 per cent of Irish girls were embarrassed by their period, while half of respondents felt that school hadn’t educated them sufficiently on menstrual history. Last month, Ireland’s first “period coach” Lisa de Jong began offering services such as womb yoga, and she teaches women to track and understand their own cycles.

Elsewhere, the charity Homeless Period Ireland is working to get sanitary products to low-income and homeless women.

Catherine Martin TD, chair of the Oireachtas Women’s Parliamentary Caucus, recently tabled a motion calling on the government to provide free sanitary products for women (it is estimated that women spend around €8,000 on sanitary products in their lifetime).

Barnett encapsulates the experiences of an impressively wide array of women. In her chapter “Wanted And Unwanted Blood”, she acknowledges a swathe of emotional stories, from those born without a womb, to one woman who didn’t want to menstruate.

“I’ll remember their stories forever,” she says. “I hadn’t really thought about periods as an identity marker. Women who had gone through menopause told me how they’d hated their periods their whole life, but were surprised when they were gone. I am grateful for my periods, because in the end, I did manage to have a baby and that’s down to my having a reproductive cycle. Don’t get me wrong, I’ll feel so happy when they have buggered off, but I will thank them for my child, and thank them for leaving my body.”

Ultimately though, Barnett would like to see a scenario where periods are simply seen as unremarkable.

“I mean, they are remarkable for what they can give you, but they have somehow remained this very weird taboo,” she surmises. “I get that blood is a really scary thing, but at the same time, it’s a life-blood. In the fourth wave of feminism, we should at least be able to accommodate the truth about that.”

At the end of our interview, I offer Barnett one euphemism for periods that she has overlooked, “rollerblading with the dogs”. She howls with laughter, and promises to make a note of it. Somehow, I suspect our ongoing fascination with the creative lyricism around menstruation still looks set to run and run.