New nutritional guidelines on drinks for children may startle parents

Kids aged five and under should not have any drink with sugar or sweeteners, scientists say 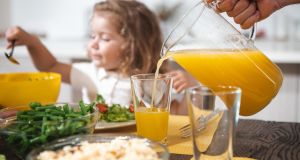 Scientists warn children should drink less than a cup of 100 per cent juice per day – and that none at all is a better choice. Photograph: iStock

A panel of scientists issued new nutritional guidelines for children recently, describing in detail what they should be allowed to drink in the first years of life. The recommendations, among the most comprehensive and restrictive to date, may startle some parents.

Babies should receive only breast milk or formula, the panel said. Water may be added to the diet at six months; infants receiving formula may be switched to cow’s milk at 12 months. For the first five years, children should drink mostly milk and water, according to the guidelines.

Children aged five and under should not be given any drink with sugar or other sweeteners, including low-calorie or artificially sweetened beverages, chocolate milk or other flavoured milk, caffeinated drinks and toddler formulas.

Plant-based beverages, such as almond, rice or oat milk, also should be avoided. (Soy milk is the preferred alternative for parents who want an alternative to cow’s milk.)

In what may come as a shock to parents with cupboards or fridges full of juice boxes, the panel also said that young children should drink less than a cup of 100 per cent juice per day – and that none at all is a better choice.

The cautions against sweetened beverages arrive amid persistent concerns about childhood obesity, which can set the stage for lifelong chronic illness.

Children develop preferences for foods and beverages at a young age, and the recommendations are made with an eye to shaping a healthy palate.