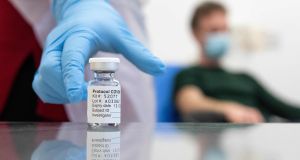 Covid-19: a vial of the Oxford vaccine. Photograph: John Cairns/Oxford/AFP via Getty

Another week, another vaccine. After so much hoping against hope for a vaccine against Sars-CoV-2, three come along almost simultaneously. It has certainly given people a welcome lift as we struggle to the end of a Level 5 lockdown.

The latest coronavirus vaccine is largely a creation of vaccinologists working at Oxford University. The Oxford vaccine, formally named ChAdOx1 nCoV-19, is made from a weakened version of a common cold virus (or adenovirus). It has been genetically changed so that it cannot grow in humans.

Developed in collaboration with pharma company AstraZeneca, the vaccine is entirely different from the Pfizer and Moderna vaccines, both of which use a new technology based on mRNA, something never used to produce a vaccine before now.

Adenovirus vaccines, on the other hand, have been researched and used extensively for decades. They are stable and easily manufactured, and in a crucial difference from mRNA versions can be transported and stored at fridge temperature.

This makes the Oxford vaccine easy to transport and easy to distribute. It means it can be readily administered in existing medical facilities such as doctor’s surgeries and local pharmacies. And it offers the possibility of a coronavirus vaccine that can be deployed widely and quickly.

The discovery included a nice element of medical serendipity. A surprising number of medical breakthroughs have occurred “by accident”, the most well known being the discovery of penicillin.

In 1928, Alexander Fleming returned to his laboratory from a two-week holiday to find that a mould had developed on an accidentally contaminated staphylococcus culture plate. The mould was Penicillium notatum, which subsequently became a huge breakthrough in antibiotic therapy.

Oxford vaccine researchers also benefited from the good luck of a “mistake”. “The reason we had the half dose is serendipity,” said Mene Pangalos, executive vice-president at AstraZeneca. When university researchers were distributing the vaccine at the end of April, they noticed side effects such as fatigue, headaches and muscle aches were milder than expected.

“So we went back and checked … and we found out that they had underpredicted the dose of the vaccine by half,” said Pangalos.

Instead of restarting the trial, he said researchers decided to continue with the half dose and administer the full dose booster shot at the scheduled time. About 3,000 people were given the half dose and then a full dose four weeks later, with data showing 90 per cent were protected. In the larger group, who were given two full doses four weeks apart, efficacy was 62 per cent.

These interim Phase III results build on Oxford’s phase I/II peer-reviewed trial results which have shown that the vaccine induces strong antibody and T cell immune responses across all age groups, including older adults, and has a good safety profile. If the phase III results are confirmed following publication in a peer-reviewed medical journal, we can then look more closely at claims that the half dose/full dose regimen could reduce virus transmission due to a reduction in asymptomatic infections. The preliminary data on 24,000 volunteers also suggest there were no severe or hospitalised cases of Covid-19 in any trial participants who received the vaccine.

Still, AstraZeneca’s vaccine may be headed for an additional global trial as it tries to clear up uncertainty and confusion surrounding the favourable results, according to chief executive officer Pascal Soriot.

Either way, the process is far from over. Regulators have to closely examine all the data from this trial to ensure the vaccine is safe. Emergency authorisation provisions will be required in Europe and the US to help speed things up but safety must be confirmed in the usual painstaking way.

Then there is the issue of running the manufacturing process on a massive scale. For the Oxford vaccine, production involves growing key components in human embryonic kidney cells, before creating the actual vaccine and then purifying and concentrating it.

The coronavirus vaccine race has got off to a good start. But there are plenty of hurdles left before the immunisation lady sings.