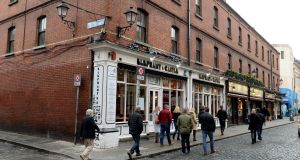 Elephant & Castle, Temple Bar, is owned by Press Up

A report on the impact of anti-virus restrictions that was prepared for the Press Up hospitality group claims taxpayers could face an industry compensation bill of €1 billion if the company wins its legal challenge against the State over the latest round of measures.

The group of 55 restaurants, bars and hotels run by businessmen Paddy McKillen Junior and Matt Ryan is suing the Government seeking compensation for the shutdown of the hospitality sector and a High Court declaration that the rules are an unconstitutional interference in its business.

As ministers continued this week to plot a course out of Level 5 restrictions that may yet leave some pubs closed, Press Up has commissioned a report by well-known economist, Jim Power. It warns of “severe financial repercussions for the State” if the company wins its case and other claims follow, and says the compensation bill for the whole hospitality sector could reach €1 billion.

The workings for the estimate are not outlined in the report but it is believed that the figure has previously been discussed among Press Up’s advisers, who projected the company’s losses if tight restrictions keep the sector effectively closed. In an affidavit filed with the High Court in the case, Mr Ryan estimated that Press Up’s losses this year from the restrictions may top €20.7 million.

The State has yet to file a response to the claims made in the legal case, which has been entered onto the court’s fast-track commercial list.

Press Up, whose venues include the Stella theatre and the Workmans Club in Dublin, recently hired former Friends First economist Mr Power to produce a report on “the disproportionate impact” of Covid-19 restrictions on the sector.

He highlighted that of the 350,000 people on the Pandemic Unemployment Payment, almost 30 per cent worked in accommodation and food services. One in four is aged under 25, as many of the younger workers that make up a large proportion of hospitality staff are displaced by a closure order that has persisted in some form in Dublin since September 19th.

“These measures cannot be described as living with Covid, which is the stated aim of Government policy,” says Mr Power.

The report argues that the National Public Health Emergency Team, on whose recommendations the Government has acted so far, was never meant to have any long-term strategic role.

Mr Power concludes that was a State “policy failure” in failing to design a sufficiently robust testing and contact tracing system, as well as a failure to add sufficient intensive care capacity since March, that led to the introduction of ongoing Level 5 restrictions last month.

“Policy is being driven by circumstantial evidence,” the report claims, referencing the fact that only 49 of the 8,311 virus clusters identified so far have been traced back to hospitality outlets.

Public health officials have in the past responded to similar suggestions by claiming that it is likely that hospitality outlets have been the original source of some of the more than 4,000 clusters identified in private homes. Anecdotal evidence has also emerged abroad to suggest hospitality outlets contribute to “super-spreader” virus events, which health experts say is easily transmitted indoors in crowded, badly-ventilated spaces, such as restaurants and bars.