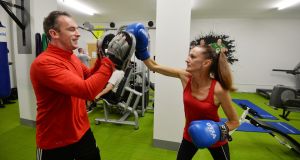 Homelessness isn’t solely about not having a roof over your head at night.  It is also about trying to live every day without the routines many of us take for granted.  These include cooking for yourself and exercising indoors.  Try getting a gym membership without a home address and you’ll quickly see how difficult it will be.

So, when the Simon Community opened its new gym in a refurbished warehouse in Dublin city centre, it immediately became a safe place for homeless men and women to come to focus on their physical – and mental – fitness.

“My whole recovery is around this gym.  I train here every day and I do the fun runs, football training and swimming too,” says Tara McNeill.

After years of homelessness, McNeill got a house last year but she comes to the gym every day, following sessions in the Simon Community recovery programme.  “I started boxing in the gym.  It took a while to get used to but it worked for me mentally and physically. I’d be lost without it all,” she adds.   This week, McNeill is in Norway representing Ireland on the women’s football team at the Homeless World Cup.

When we met, she could barely contain her excitement for having been picked for the team.  “It all happened through this gym. Sometimes, you think there is no hope but there is hope but it takes just one person to believe in you for things to go right,” she says.

The Simon Community gym, which has all the equipment of a commercial gym – a treadmill, cross-trainer, rower, spin bikes, weights bench, free weights, boxing bags, skipping ropes and balance balls – replaces a smaller one which was part of the addiction treatment services at Ushers Island near the River Liffey.   It is run by Niall Murtagh, the Simon Community’s health and wellbeing services coach and full-time volunteer, Johney Martin, who also gives boxing classes.

Providing a free gym for homeless people requires thinking outside the box.  When you visit, you realise the extraordinary benefits that it brings.  And while it’s easy to focus on the pain and trauma etched on the faces of the people working out on the equipment,  access to physical exercise, nutritional advice and relaxation classes throws a lifeline to homeless people that can actually save their lives.

I’ll be a father again too and my 22-year-old daughter is also having a baby soon, so these babies will give me a second chance

Martin Reilly has been coming to the gym for the last while.  “I run on the treadmill. I’m more into cardiovascular exercise and light weights to tone up my body.  I believe a healthy body promotes a healthy mind and keeps bad thoughts away,” he says. “If you’re feeling down or angry, you can turn it off in the gym.  You wouldn’t be able to swing a lollipop afterwards. It tires you out so much.”

Reilly is keen to talk a little about his life so far.  “I’m an addict and I’ve lost a lot of time in my life but I’m hoping to begin a detox programme soon.  I’ll be a father again too and my 22-year-old daughter is also having a baby soon, so these babies will give me a second chance and I can show them the photographs in this article – to tell them that you can turn your life around,” he says.

Murtagh says that for homeless people to come to the gym, they have to overcome the barriers of not having the right gym gear and also not wanting to expose their bodies.

“People say ‘I can’t train because I don’t have the clothes or the runners’ but we link up with the Simon Community shops who send down runners and training gear every week.”  It’s all about building up their confidence.  People also come here to avoid the boredom and to get off the streets,” says Murtagh.

Generally speaking trainers push their gym clients to train harder but it’s the opposite at the Simon Community gym.  “A lot of our work is to hold people back from over-training,” adds Murtagh .

Johney Martin says that much more goes on than simply coaching.  “We’re not just trainers.  Most exercise coaches wouldn’t be able to deal with people who have been homeless, stuck in addiction and isolated for many years.  There’s a friendly atmosphere here and we’re very supportive and gentle with people who come in after having a bad day,” he says.

Murtagh adds that at the initial assessments, people often have injuries from fights or from sleeping rough.  “We say that no matter what injuries or illnesses they have, we will work with them.”

The Simon Community Health and Wellbeing services is the only one of its kind in Ireland.  The staff and volunteers work across the organisation’s housing and treatment services, helping people who have experienced homelessness.

As well as offering free gym, boxing and fitness sessions, Murtagh promotes good self care, nutrition and relaxation classes and one-to-one sessions in mindfulness, tai chi, meditation and movement and reiki are on offer to those interested.

Since their new gym opened in the summer of 2017, the Simon Community has started to invite referrals from other homeless and addiction services too.   All they need now is a big philanthropic donation so that they can install showers and changing facilities for the gym users.

Immunity to Covid-19 could be lost in months, study suggests

What sold for about €385,000 in Kilmainham, Glenageary, Howth and Beaumont?
8