Is it worth experimenting with barefoot running? 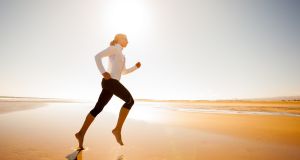 What could be more natural than running barefoot?

As Dr Vybarr Cregan-Reid makes clear in the July 2017 issue of Psychology Today, running reminds us that we have bodies: “It’s bizarre that our feet, which are incredibly sensitive parts of our body, spend their time wrapped up in shoes.” And of barefoot running, he says that it gives him “a richer, more dynamic experience. We develop emotional memories of places we actually touch”.

Unshod humans have run long distances for millions of years

So is it worth experimenting with barefoot running? After all, it makes evolutionary sense, since unshod humans have run long distances for millions of years, and running barefoot needn’t be a barrier to athletic success. For example, in 1960, Ethiopia’s Abebe Bikila won the Rome Olympic marathon in a world-record time of 2:15:16 in his bare feet; and between 1984 and 1986, South African-born Zola Budd – running barefoot – won two World Cross-Country titles and set world records at 3,000m (indoors) and 5,000m.

But, yes, it’s also the case that at the 1964 Tokyo Olympics, Bikila triumphed again in running shoes; and in 2010, Budd – now Zola Pieterse following her marriage to Mike Pieterse – told Cary Groner in Lower Extremity Review, that she did 40per cent of her training in shoes: “I used to do all my road running in shoes, and I still do,” she said. “My feet weren’t strong enough, and I was scared of the broken glass. Most of my training I did on the grass and on the track, and that I did barefoot.”

With Bikila and Budd, barefoot running was a natural extension of everyday barefoot life in hot surroundings. But for those living in Westernised, urban societies, the advent of modern running shoes in the 1970s – combined with their intense commercial promotion – blunted the appeal of barefoot running. Notwithstanding that, however, readers may have seen the documentary film First or Last (2014), featuring leading Irish triathlete Chris Mintern of Leevale AC, running barefoot.

Last year a report in the American Journal of Sports Medicine cited studies suggesting that “barefoot running (as well as associated minimalist shoe running) is often advocated for reduction in injury risk, central to emerging evidence that successful barefoot running might result in the adoption of a forefoot landing pattern, which is associated with reductions in loading rate and subsequent risk of injury.”

So how is barefoot/minimalist running viewed in Ireland?

Angie Hartnett is a practising physical therapist in Ballinrobe, Co Mayo. With an MSc in sports physiotherapy, Hartnett’s undertaking a PhD in active leisure and sports participation in a rural, elderly population. She also organised two Back 2 Barefoot 10km races in Ireland in March 2012 and March 2015. Hartnett told The Irish Times: “I think, in general, that Irish runners view barefoot or minimal running as a quirky or unusual fad that may have merit, but not something they would be prepared to try. Some runners may use them solely for training purposes but certainly not for competing.”

They surveyed 692 runners who had completed at least one half-marathon in the previous two years, and 238 reported running barefoot

Might barefoot running appeal to individuals with certain personality traits? It is a seldom-studied area of research, but there is published evidence that running barefoot is perceived by some to be “extreme” and “crazy”, cited by the authors of an American study published last year in the journal Sport Sciences for Health. They surveyed 692 runners (mean age 39.8) who had completed at least one half-marathon in the previous two years, and 238 reported running barefoot.

The researchers found that “some runners may have inherent personality traits that make them more inclined to attempt barefoot running; they wish to seek out new experiences and they do not mind the risks involved in the activity”. In addition, they cited a study published last year which explored the relationship between barefoot running and cognitive benefits, finding that “working memory is increased when performing barefoot activities, due to the increased attentional demand it imposes”.

Hartnett says that when running barefoot or minimally shod, you adopt a more natural style, with your hips, knees and ankles in greater alignment than when landing on your heel. “There’s also,” she explains, “a much softer landing with far less impact through the joints when landing on your mid-foot or forefoot compared to heel striking.

“The muscles in our lower legs and feet are being used to their full potential with the Achilles tendon acting as our natural shock absorber.

“In addition, there’s a heightened awareness of foot position, which might decrease the risk of ankle sprain. Running barefoot also strengthens the intrinsic muscles in the feet which in turn support the arches of the feet.”

Hartnett is clear that running barefoot or in minimalist footwear has many benefits, but she advises a cautious approach to those contemplating a change. “The most important thing to remember when transitioning into barefoot or minimalist running is to build up the mileage slowly. Far too often people run their usual distance in the barefoot style and sustain injuries because their muscles are not conditioned adequately for the change in style.”

This is borne out by the results of a study published last year in the American Journal of Sports Medicine, which investigated 26 habitually shod runners who completed an eight-week progressively introduced barefoot running programme. The authors emphasised that “runners choosing to transition to barefoot running may require gait retraining or greater training exposure to adapt. However, caution should be taken, since the transition may increase injury risk; for example, increased risk of bone stress injury was shown over a 10-week transition to minimalist running.”

So, give your feet some fresh air, and perhaps enjoy a gentle run along the beach.

But if you’re contemplating a wholesale change to barefoot running, it pays to begin gently; get some expert, independent advice; and listen to your body.