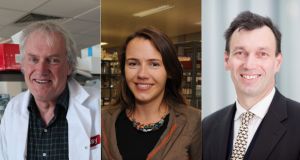 Over the past 12 months, our airwaves and television screens haven’t been dominated by actors, musicians or reality television personalities, but by doctors, epidemiologists, immunologists and scientists. They have become regular fixtures in the media as the general public has come to rely on them to make sense of both the pandemic and the government response.

After spending much of their careers toiling away in relative obscurity, many have become household names. So what has it been like for these experts to be catapulted into the public eye and thrust into the spotlight?

When authorities in China introduced strict lockdown measures to help curb the spread of the novel coronavirus, Prof Sam McConkey knew that the situation was serious.

“That was when I realised this was a massive thing,” he recalls.

It was January and most people in Ireland were focused on the general election. An infectious disease specialist, McConkey decided to use the small number of connections he had in the media to help get the story out there and “inject a sense of urgency” into the discussion. He appeared on Today with Seán O’Rourke and The Last Word with Matt Cooper to discuss the virus.

Since then, McConkey has made regular appearances in both Irish and international media. On an average day, he can field anywhere from three to eight media requests. Couple that with the fact that he has been working on the frontline throughout the pandemic and it has been “completely exhausting”.

I’m not anybody and then suddenly there are people who are talking about me and not in a nice way. Nobody likes that

“One evening, I was in Donnybrook and I was doing Claire Byrne at 11.30pm and I was starting to flag and fade and just get tired,” he recalls. “Claire said, ‘Have some coffee’ and I said, ‘No I don’t want to juice up because I have to get up in the morning.’ And she said, ‘How do you feel?’ I said, ‘Oh, I’m just exhausted because I did a BBC live radio interview before 7am.’ And there I was at 11.30 at night trying to do live television.”

Thanks to his media appearances, McConkey has found himself getting recognised while out and about. “But I don’t feel put out by that.”

At the same time, he has found himself on the receiving end of death threats and vicious online abuse. “I find this a horrible aspect of our world that there is this huge lack of civility, a lack of respect, a lack of listening and a lack of cherishing the fact that we live in an open public democracy,” he says.

Given the online abuse, did he ever contemplate stepping away? Not for a minute, he says.

“I grew up on the border in Monaghan,” he says. “I grew up in the middle of a civil war and I was right in the middle of it, knowing lots of victims – some of them related to me – and sadly some of the perpetrators. I chose to go work in a warzone in Sierra Leone. I have done that war surgery pulling out bullets and patching together broken bodies that have been blown up or chopped up with knives and machetes.

Prior to the pandemic, Prof Aoife McLysaght was a seasoned media contributor. But being asked to discuss Covid-19 on radio and television pushed her into new terrain. It was more adversarial than what she was used to, she says.

“I kind of joke that I bit that I was always practising because I’m one of those people that kind of talks at the radio,” she says. “When somebody is on and they say such and such, I’ll go, ‘That’s not what you said last week!’ That was my practice. I was doing it all along.”

A member of the Independent Scientific Advocacy Group (ISAG) and an advocate for Zero Covid, she says her reason for getting involved in the public debate was twofold. As a scientist, she felt a responsibility to explain the scientific rationale behind certain decisions and proposals to the public. She was also frustrated with the Government’s handling and the idea that “we were going to make similar mistakes all over again”.

“I’m not at all interested in being in the media for personal reasons,” she points out.

If you’re a scientist, you’re always looking for a solution. That’s your job

Since appearing on Prime Time in November, she says the media requests have been coming in “non-stop”. In that time, she and her colleagues in ISAG have worked hard to refine their message and ensure they land their points in the media. It’s been a learning curve.

“We aren’t PR people or marketing people,” she says. “We don’t know that stuff.”

McLysaght says she has received messages from people thanking her for speaking out. However, she has also received nasty comments about her physical appearance as well as messages from anti-vaccination conspiracy theorists. It’s not something she’s used to, she says.

“I’m not anybody and then suddenly there are people who are talking about me and not in a nice way” she says. “Nobody likes that.”

Another familiar face throughout the pandemic has been Prof Luke O’Neill. Over the last year, he has appeared on television, radio and podcasts. He has been parodied on Callan’s Kicks and Gift Grub. He even performed with Mundy on RTÉ’s NYE Countdown Show.

On the day we speak, he has already made an early morning appearance on Euronews and stopped by The Pat Kenny Show. “It has ramped up a lot,” he says of his public profile.

Regarded as a beacon of positivity, many have come to rely on O’Neill for good news.

“I never saw myself that way,” he says. “If you’re a scientist, you’re always looking for a solution. That’s your job, really. Many times experiments are failing and you learn to look at the positive side. ‘Let’s try this instead of that’.

“I have also got this innate faith in science because I’m a scientist and I’ve always felt that science is the way out of this damn thing. It was never difficult to put that [positivity] up there. Not in a false way or in a way that’s staged. It’s real. And look what’s happening? The vaccine triumph is here already so it’s fantastic.”

Like his peers, he has had to contend with trolls. Both his wife and sister have received abusive calls and messages. However, he says “99 per cent” of the messages he receives are positive.

Then there are the gifts. Off the top of his head, he has received around 200 homemade masks, seven Mass cards, a crystal decanter, a hamper of food and a piece of handmade lace. Meanwhile, an entire primary school banded together to make him a giant poster to say “thanks for keeping them going”.

Every day, he receives three or four requests to record a video for someone. He always obliges. “It takes literally ten seconds. I can do it immediately and send it off to them. Little things like that are so easy for me to do and it makes such a difference for people.”

Despite his heightened public profile, he says he still spends most of his time doing his day job. The days are longer, but he doesn’t mind. “What else would I be doing in the lockdown?