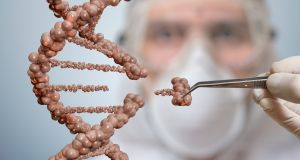 The problem with making changes to DNA is that it’s hard to predict the full range of consequences. Photograph: iStock

If you’ve never heard of Crispr then get ready, because this is a technology you’re likely to be hearing a lot more about in future. From genetically modified Chinese babies to foods that deliver man-made health benefits, the potential of Crispr is enormous but its implications have some deep thinkers concerned.

Announced in 2012, Crispr stand for Clustered Regularly Interspaced Short Palindromic Repeats – a scientific name that doesn’t do much to tell the average person what it does. However the technology represents an astonishing breakthrough, allowing scientists to essentially “edit” genes and change aspects of DNA in ways previously thought impossible.

Late last year, gene editing was voted to be the innovation of the last decade by readers of The Irish Times, beating out social media, the cloud and even smartphones.

So just what is it and how can something so low-key be so significant?

Crispr (pronounced “crisper”) allows users to edit genomes and alter DNA sequences to modify gene function. It can be used to correct genetic defects, treating and preventing the spread of diseases and improving crops. While gene editing was possible before Crispr, it cost an enormous amount of money and was relatively imprecise.

The comparison has been made that old-style gene editing could be likened to a blunt mallet while Crispr is more like a laser beam, capable of surgical accuracy at the level of DNA. The science behind this is predictably complicated, but, in essence, Crispr allows scientists to find a specific bit of DNA inside a cell and then alter that piece of DNA.

It can be used to turn genes on or off without altering their sequence and it means that scientists can alter the DNA of plants, animals and potentially human beings to do any number of things. The most significant include altering the DNA of living people to turn off genes that have resulted in them suffering from genetic disorders, or making changes to an individual person’s genome so that they don’t pass on any genetic defect.

In Ireland in 2018, scientists from Trinity College discovered a therapy for one of the most common soft tissue cancers using Crispr. Synovial sarcoma affects teenagers and young adults and has survival rates of less than 50 per cent.

“Crispr is a two or three component system that allows you to use specific targeting RNA molecules to direct an enzyme that will cut and edit DNA and in theory you can change the DNA any which way you might want to,” said Dr Gerard Brien, senior research fellow researching childhood cancers in the genetics department at Trinity College.

“In theory, if a disease is caused by a specific mutation, then you could fix that mutation,” he said.

“But it’s still early days. In theory, all sorts of things are possible but the practicalities of how to do these things in a way that is effective and safe – we’re not anywhere near a point of understanding how to do that.”

The problem, according to Dr Brien, is that of unwanted “off target” effects.

“We’re not yet at the point where we can make one clear and specific change and not unintentionally create other changes at the same time. It’s these other unwanted changes that are the problem and that will be the stumbling block in using Crispr ethically in humans for the next twenty years, if not more,” he said.

In 2020 though, Crispr has applications outside of medicine. It’s already being used to alter the DNA of plants and animals to create new kinds of super-foods, genetically modified (GM) to be healthier and offer advantages to the consumer.

To date, some GM foods have been treated with suspicion by the public because their modifications have mostly been for the benefit of the farmers or retailers – tomatoes that last longer on the shelf, for example – but instead of this, think of coeliac-friendly GM wheat, rapeseed oil high in beneficial omega-3s and even GM potatoes that don’t produce harmful cancer-causing acrylamides when fried.

Crispr is a complicated beast, however.

The problem with making changes to the DNA of a plant, animal or person is that it’s often quite hard to predict the full range of consequences. Tweak something here, and something over there can be affected without you realising.

It’s for this reason that experiments on human beings are considered hugely unethical. But that hasn’t stopped everyone from tinkering with the technology. In late 2019 Chinese biophysicist He Jiankui was jailed for three years and fined 3 million yuan (about €393,000) when he was convicted of violating a government ban on experimenting on human embryos.

He claimed to have edited the genes of a set of human twins, known by the pseudonyms Lulu and Nana, to give them protection against HIV, but was globally condemned when news of his actions broke. The Chinese court accused the man of having essentially gone on a glory run, saying the people involved in the experiment had acted “in the pursuit of personal fame and gain. They’ve crossed the bottom line of ethics in scientific research and medical ethics.”

The consequences of He’s actions are still unknown, but the effects will be permanent. If the twins he experimented on grow up and have children of their own, they will inherit his genetic modifications and potentially introduce a permanent change to the human genome.

“One of the issues with the Chinese-born twins is that the germline was edited so they will pass their edits on to future generations and we don’t know what the long-term effects of that will be, it could be that these changes to their genes could initiate cancer down the line. We just don’t know,” said Dr Oliver Feeney, a bioethicist and lecturer in University College Cork.

“There is this thing called the precautionary principle which states that you shouldn’t do something unless you have all the down-side risks guarded against and you know exactly what’s going to happen. The problem is we don’t do that in any other context. We generally just bulldoze through life and see what happens.

“The question here is should we shape humans and the way they develop in future? Is that ethical? Most people would agree that Crispr-enabled treatments for diseases would be a good thing if they’re effective and safe, but what about enhancements? We’re only at the start of the regulatory landscape that will be required to manage this.”

Dr Feeney suggests that the concept of gene editing is inherently scary to some people and that can colour the way in which it is viewed.

“There is a possibility that we could be too concerned about Crispr and any issues that might arise. That’s not to minimise the risks or anything, but there is a certain level of hype around this technology and perhaps also excessive fear about what it can do,” he said.

“Some people have gone as far as to suggest that engaging in gene editing opens the door to eugenics and a world of genetic ‘haves and have-nots’. It’s ironic to consider that this is the same scenario presented in the movie Gattaca and here we are having the conversation for real 20 years later.”