‘I don’t feel my asthma is properly managed. It has a real hold over me’ 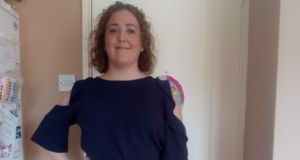 Bernie Riordan: ‘I wasn’t diagnosed until I was 19, which was very late, and I have been told that it is usually worse in people who develop it beyond childhood’

More than 470,000 people in Ireland have asthma and are plagued with symptoms of wheeziness, tightness in the chest and accompanying tiredness.

My three sons have the condition and, although it is managed well, they all play sport and get on with their lives. There is no getting away from the fact that daily medication is a necessity – except it seems, when we are abroad.

Every time we are out of the country (with the exception of being in the UK), their chests clear up completely and there isn’t a hint of breathlessness or any of the other symptoms that go hand-in-hand with the condition.

According to Dr Tony Cox, medical director of the Irish College of General Practitioners (ICGP), this is a common occurrence not just when visiting sunnier climes but also during the warmer months in Ireland. So with winter fast approaching, it is important for everyone with asthma to ensure they have all the medicine they need to hand and have been reviewed by their GP.

“Many patients with asthma can reduce their medications on an annual and seasonal basis over the summer months and step them up again over the winter months, when influenza and other viral and bacterial infections are at peak circulation,” he says. “But other asthma patients with a significant allergic component to their asthma may need to maintain their treatment all year round.

“However, regular six-monthly reviews (or more frequent if the asthma control is unstable) is good medical practice and allows the doctor to assist the patients in optimising their asthma treatment and control and thereby enabling them to maintain their optimum quality of life.”

Bernie Riordan (39) has first-hand experience of this debilitating condition and says despite following all of the recommended guidelines, she still doesn’t have a handle on it and suffers every day with physically draining symptoms.

“I wasn’t diagnosed until I was 19, which was very late, and I have been told that it is usually worse in people who develop it beyond childhood,” she says. “It gradually got worse as I got older and I have been a chronic asthmatic ever since with lots of hospital admissions – and when I was 23 I was also diagnosed with sarcoidosis of the lungs, which also affects the lymph nodes.

“On a day-to-day basis I am short of breath pretty much all of the time and have to go to the doctor or A&E regularly as I often end up with chest infections – even though I am on an almost constant prescription of antibiotics, steroids, antihistamine, nebulizer and other medication.”

Chronic illnesses such as asthma require regular monitoring and review – and control of an individual patient’s asthma can change over time and their medications may need to be either stepped up or reduced at review time.

But Bernie, who lives in Dublin with her husband, Ciaran, and daughter, Emily (10), has followed all the advice given to her by doctors and still feels that her condition isn’t under control.

“I don’t feel as if my asthma is properly managed at all,” she says. “I’m doing all the right things – took up the carpets in the house, got rid of dust mites and I take all the right medication when I am supposed to take it, but it still has a real hold over me. In fact Ciaran is great at researching treatment and ways of alleviating symptoms, and he has encouraged me to see a cardiologist, as he thinks there might be something more to it than asthma.”

However, despite an inability to exercise being the stereotypical image of an asthma sufferer, the office worker says joining a gym has been the most helpful treatment in managing her condition.

“I know it sounds mad, but having tried everything else, last November I joined a gym in an attempt to strengthen my lungs and it seemed to work wonders,” she says. “I used to do kickboxing in the past but gave it all up when my asthma got bad so I am now back exercising whenever I get the chance.

“The alternative is to be stuck in a cycle where you are trying to preserve your energy and end up not being able to do anything at all. It’s an incredibly debilitating illness and I really don’t think people realise how hard it can be to live with – so for the moment I’m going to keep doing as much exercise as I am able for and try to live my life as normally as possible.”

A spokesperson for the HSE says that although it mainly starts in young children, asthma can develop at any time and may be caused by a number of factors.

“Asthma affects the airways which carry air in and out of the lungs – they become oversensitive and react to things which would not normally be a problem, such as cold air and dust,” he says. “Anyone can develop the condition and it can start at any time of life, although it usually begins in childhood. Sometimes it can affect several family members and may be associated with other allergies such as eczema and hay fever.

“Adult-onset asthma may develop after a respiratory tract infection but certain aspects of modern life may have contributed to the rise of asthma over the last few decades – these include diet, a more sterile home environment and housing.”

Although Bernie Riordan doesn’t know what kick-started her asthma, she has learned to live with it and says that anyone living with asthma should find something to help them become mentally and physically stronger.

“Asthma is a very difficult condition to have and it can really get you down if you let it,” she says. “You have to constantly be on top of your medication, even if it doesn’t seem to be doing a great deal, because if you forget to take it, things will get worse. So my advice to fellow sufferers would be to talk to people who also have it and keep harassing doctors when you aren’t well, as I have found that it can be easy for some of them to just sign another prescription for you without really trying to discover whether or not the medicine is working and if not, they need to look at why it’s not – so don’t be afraid to ask.

“I would also encourage people not to give up the things they like doing as it’s important to find the motivation to keep going and perhaps doing something like going for a walk or a swim (even if it’s the last thing you feel like doing) will help you find that extra bit of energy needed to get through the day or the week. It’s all about building ourselves up and staying strong to deal with whatever else comes down the line.”

– Ireland has the fourth-highest prevalence of asthma worldwide.
– One person dies every day in this country as a result of the condition.
– An estimated 470,000 people in Ireland have asthma and 60% do not have it under control, greatly increasing their risk of suffering a fatal attack.
– Prevalence in 13-14-year-old schoolchildren increased 40% between 1995 to 2003 - 15.2% to 21.6%)
– It is the most common chronic disease in childhood and the most common respiratory condition in Ireland.
– Symptoms of asthma include difficulty breathing and shortness of breath, a feeling of tightness in the chest, wheezing or a whistling noise in the chest, coughing or feeling hoarse, particularly at night.
– Symptoms may occur in isolation or together and may be brought on by colds, chest infections, dust, allergy, change of temperature or irritants in the air.
– Although it cannot be cured, with proper management and treatment, it can be controlled and doctors say there is no reason why most people with asthma shouldn’t be able to live a full, symptom-free life. For more information visit hse.ie and asthma.ie