Childhood obesity: How parents can learn to say no 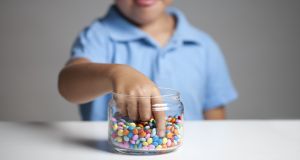 ‘One of the big things parents need to be aware of, is just how directly their children are being targeted.’ Photograph: iStock

A recent study from Safefood found that a fifth of calories in children’s diets now come from foods high in fat, sugar and salt – around 10 times more than recommended.

The same study revealed that 42 per cent of parents used treats to reward good behaviour while just 6 per cent of parents said they gave treats rarely. These statistics are likely to surprise many parents, some possibly because they might have imagined the rewarding figure to be even higher.

Prof Donal O’Shea, HSE clinical lead on obesity, is impressed that the rate of children in Ireland considered overweight or obese stands at only 25 per cent, particularly “when you look at the environment as it’s set up by the food and drinks industry and the marketing to kids”.

“The treating behaviour is more common in the less-well-off, less-educated parts of society. And the better-off, better-educated are better at saying no. It’s very clearly established in international literature that the consumption of high-fat, high-salt, high-sugar, processed foods and sugar-sweetened drinks is directly linked to childhood overweight and obesity. If you moderate their intake, then you impact positively on the child’s weight.”

Prof O’Shea believes that, along with parents, retailers also have a role to play “but they’re not playing it”, he says. “One of the big things parents need to be aware of, is just how directly their children are being targeted. The products that are targeting three-year-olds are displayed at a three-year-old’s eye level. The ones targeting 10- and 11-year-olds are displayed at that higher level. The packaging is designed in such a way that the louder-colour packaging that appeals to the younger kids is on the treats that are aimed at them. If parents knew the depth of research that’s gone into targeting treats at their kids, they would, I think, be much stronger at saying no.”

O’Shea believes the government are afraid “to flex their power” on this issue citing the outgoing UK Chief Medical Officer “who has said that we should be looking at things like plain packaging on sweets and treats”.

“Because we have an obesity situation that is driving type-2 diabetes, driving cancer, driving heart disease, you’ve got to take it very seriously and you’ve got to do things that will reduce the drivers. That involves legislation. The sugar tax has been fantastic because it’s driven a reformulation by the companies and sales of sugar sweetened drinks have dropped”.

Earlier this year Cathal McCrory, psychologist and research assistant professor at Trinity College Dublin, published an article examining social inequalities in BMI and obesity. “The article examined differences in BMI growth trajectories according to the mother’s highest level of education attainment,” McCrory says. It revealed that “differences in BMI emerge during the preschool years and continue to widen across childhood and adolescence”.

By the time children from lower socio-economic backgrounds begin preschool, availing of the Early Childhood Care and Education (ECCE) scheme, they are “already more than twice as likely to be obese compared with their more advantaged counterparts”.

On foot of the study McCrory proposed the “national child measurement programme” because, he explains, “we need to track the prevalence of childhood overweight and obesity – which is an important measure of our children’s health”.

While McCrory envisaged a programme funded by a portion of proceeds from the sugar tax, involving an annual measurement of height, weight and waist circumference by a public health nurse, the proposal was not well received.

“Parents and some advocacy groups were concerned about potential stigmatisation,” he says. “Some were concerned that children would be weighed in front of their peers and that teachers would be doing the measurements”. “I suspect others felt that it was a form of creeping nanny stateism. Some parents may have been concerned that it would be used as a means for apportioning blame. Doctors have previously told me that it can be a difficult topic to raise with parents.”

Nevertheless both McCrory and O’Shea still believe there is merit in the measurement programme.

“If you have a situation where we know the links between childhood overweight and obesity and adult overweight and obesity, and you know the links between obesity and 220 chronic diseases, then you’ve got to track the weight of kids, and parents have to get involved in being aware that their child is a healthy weight or is not a healthy weight”, Prof O’Shea says.

“If we can get our population to the age of 18 at a healthy weight and reasonably physically active, you would transform the burden of disease in this country. Obesity is driving the trolley crisis. The Government declares the trolley crisis an emergency but is really not doing enough to prevent or treat obesity.”

McCrory points out that parents are not always best placed to recognise overweight or obesity in their children, with data from a previous study (Growing Up Ireland) suggesting “many parents of obese children rated their children as having a normal body weight”.

He also believes there’s a lack of investment from the Government when it comes to tackling “the fundamental causes of childhood obesity, of which socio-economic factors are paramount. International evidence suggests that high-quality diets are more expensive than low-quality diets and that those on low incomes are more sensitive to the cost of food.”.

“Parents today are more time-starved than ever before, and using unhealthy treats as a reward for good behaviour, or even to bribe them, has become a default style of parenting and discipline.”

Berry encourages her community to get involved in making healthy treats “in order to break the sugary treat habit” and believes establishing healthy eating habits from “the moment you start to wean your baby is essential to raising a happy healthy eater for life”.

Berry also considers family mealtimes to be very important. “Children and teens who share family meals at least three times a week are more likely to be in the normal weight range and have healthy dietary and eating patterns than those who don’t.”