From Mr Mom to Mrs Doubtfire, these films are all based on the same joke: men taking care of children is funny 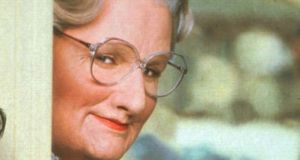 Robin Williams in Mrs Doubtfire: a man dressing up as an old Scottish woman for the privilege of being in the same room as his kids has layers

As the cult of the stay-at-home dad continues to stumble, blinking and pale, into the milky light of day, we hail Michael Keaton as our benevolent and prescient leader.

He was ahead of his time, and there is nothing he wouldn’t do for his on-screen offspring. In One Good Cop he plays an NYPD detective who does the honourable thing and takes care of his murdered partner’s children. In My Life, as a terminally-ill man, he spends his remaining days recording a home video to depart a lifetime’s worth of wisdom to the son he will never meet.

He even goes as far as returning from the dead as a snowman in Jack Frost just to hang out with his kid, for God’s sake. And I think every parent can sympathise with his position in Multiplicity. As someone with abysmal time-management skills, the idea of cloning myself to get everything done is hugely appealing, consequences be damned.

But really, we owe him our thanks for one film above all. The history of the stay-at-home dad is a short one and it begins, unsurprisingly, with the 1983 Keaton comedy Mr Mom. There were, of course, stay-at-home dads before this watershed moment, but they were mysterious, shadowy figures; their stories lost to the fog of time. It took this John Hughes-penned Hollywood classic to take us gently across the Rubicon. There was no going back: dads were invading the home.

Here are some things that happen in Mr Mom.

Keaton, a successful auto-engineer gets fired from his job and becomes a stay-at-home-dad, while his wife, played by Teri Garr, returns to the workforce. Keaton finds it hard. He loses a kid in the supermarket. He puts too much detergent in the washing machine. Meanwhile, his wife is faring no better. She gets sexually harassed by her boss and quits. Keaton is offered his old job back and takes it. Order is restored. The end.

Wait, what? That isn’t how things were supposed to end. Keaton was supposed to love being a stay-at-home-dad, and stick with it. Garr’s career was supposed to take off, dismantling stereotypes, not reinforcing them.

A decade later, Robin Williams would take the idea one step further in Mrs Doubtfire. This was to be, in fact, the apex of the dad-as-mum movie, after Arnie jumped the shark with Junior the following year. There are social commentaries disguised as popcorn comedies, and then there is the eye-watering, tragically inerasable sight of Arnold Schwarzenegger giving birth.

If Mr Mom is about a man struggling to adapt to life in the home, Mrs Doubtfire is about a man struggling when he’s kicked out of it. We’re faced with the same problem: how do you square the circle of being a man, with being a man looking after your own children? The answer in both films is the same: become a woman. In Mr Mom it was metaphorical. In Mrs Doubtfire, less so.

Mrs Doubtfire is one of a long list of films that change markedly when viewed as a parent. A few subtle tweaks to the score and this transforms from a heartfelt family comedy into a disturbing psycho-drama. Nevertheless, it hit a chord. A man dressing up as an old Scottish woman for the privilege of being in the same room as his kids has layers.

From the slapstick of Three Men and a Baby to Joey and Chandler losing Ross’s baby in Friends, people can’t get enough of men struggling with kids. Or at least they couldn’t get enough of it. This particular sub-genre has been replaced more recently with the equally ludicrous “dad gets violent revenge” film, led by Taken and Edge of Darkness.

So what are we supposed to learn from all this? The films I have mentioned have a couple of things in common. Most obviously, they are all based on the same joke. Men taking care of children is funny. Take a man from the workplace and put him at home with kids and you’ve got a ready-made fish-out-of-water comedy. How do these hapless dads deal with it? Mostly by becoming women; in some cases literally. According to Hollywood, being a man and being a stay-at-home dad are incompatible ideas.

You can be one, but not both. It is a myth proving difficult to kill.

With that in mind, and after careful consideration, we reject Michael Keaton as our leader.