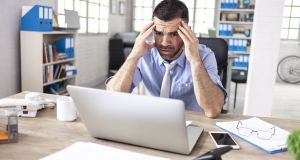 Cases involving sexual abuse of children have a strong impact, and this impact can become stronger if the staff member is, or becomes, a parent. Photograph: iStock

Emotional trauma is an invisible wound. It can lead people to seek relief in self-medicating and can numb them emotionally.

When the trauma isn’t primary (such as a child watching a parent being beaten up by another parent) it’s called “vicarious”.

Recent examples can be found in a startling report by The Irish Times Crime Correspondent Conor Gallagher on emotional trauma among staff in the office of the Director of Public Prosecutions. International examples have come in reports on traumatisation of Facebook workers who vet videos of shocking examples of human behaviour.

Conor Gallagher’s news story on the office of the DPP was startling, partly because it was unexpected – though it makes sense when you hear about it – and partly because the reaction to it was fairly muted.

Those at risk of being traumatised by their work include staff who deal with victims of crime, especially if they have to tell those victims that their cases will not result in a prosecution. According to research by barrister and trauma expert Jennifer Bulbulia, exposure to child abuse and fatal road traffic cases can be traumatising, as can graphic photographic and video evidence. The research was commissioned by the DPP.

Cases involving sexual abuse of children have a strong impact, and this impact can become stronger if the staff member is, or becomes, a parent.

Emotional trauma can take the form of flashbacks to frightening scenes as well as intrusive, distressing thoughts. Nightmares, sleeplessness and emotional numbness (a form of self-protection) are also common aspects of emotional trauma.

This doesn’t imply any weakness on the part of people suffering emotional trauma – it is part of the human psychological make-up.

DPP staff reported many of these reactions, including hyper-vigilance around their children.

It is important to stress that 200 people work in the office of the DPP, and these remarks are not meant to be about any individual.

According to the research, anything from 36 per cent to 54 per cent of the 106 respondents suffered some degree of traumatisation depending on the measurement used.

Most people tried to deal with it on their own. Fewer than one in 20 sought professional assistance.

One protective factor, which I think the DPP’s office can be proud of, is that levels of job satisfaction in general are high, burnout is low and staff find the working environment “positive, collegiate and cohesive”.

The report recommends psychological support and such measures as warning labels on case files that contain distressing materials. Some staff suggested a dedicated unit dealing with sex crimes be established but with members rotated out of it after a few years. A “safe space” in which staff could talk freely about their experiences was also suggested.

Do gardaí, soldiers and health service staff get traumatised?

Sometimes they do, but they may be protected by the advance knowledge that the job involves dealing with things that would shake most of us.

It is, of course, important to acknowledge that the victims of violence or abuse are likely to be far more traumatised than those who see images of it. That doesn’t take away from the seriousness of “vicarious” traumatisation.

I mentioned Facebook above. Its vetting contract staff don’t have the satisfaction of knowing that videos they watch record crimes for which someone has been arrested. The depiction of their working conditions in the groundbreaking report on the Verge in February, titled The Trauma Floor, suggested a workplace far removed from “positive, collegiate and cohesive”.

Regarding the office of the DPP, I have been surprised, as I mentioned above, at the muted general reaction to the research by Bulbulia.

But I shouldn’t be. If emotional trauma was physical and visible we would all be shocked and various agencies would fall over themselves in the rush to be seen to be doing something about it wherever it occurs.

But invisible psychological wounds fly under the radar of public awareness.

And that, as anyone in the world of mental health could tell you, is an old story.

Padraig O’Morain (@PadraigOMorain) is accredited by the Irish Association for Counselling and Psychotherapy. His latest book is Daily Calm. His daily mindfulness reminder is free by email (pomorain@yahoo.com)