Pregnant? Get the flu and whooping cough vaccinations

Campaigns are tackling public hesitancy to get vaccinated due to misinformation 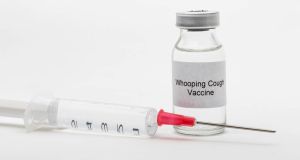 The HSE has worked with Twitter on the launch of a tool that will proactively point people to credible health information about vaccinations. Photograph: iStock

Reviewing Ida Milne’s Stacking the Coffins: Influenza, War and Revolution in Ireland, 1918-19, Christopher Kissane notes that a century ago Spanish influenza caused some 20,000 deaths in Ireland, and that: “[The Irish Times] reported ‘cortege after cortege’ streaming through central Dublin, as the roads to Glasnevin became ‘a practically unbroken succession of funeral processions’.”

Now a major study published in the journal Vaccine provides information on the uptake in Ireland of flu and whooping cough vaccines during pregnancy, identifies factors that predict vaccination and highlights potential areas for improvement.

There were three main study findings.

First, flu and whooping cough vaccine uptake were moderate at 61.7 per cent and 49.9 per cent, respectively.

Third, GP recommendation was the main reason for receiving flu (39.2 per cent) and whooping cough (71.8 per cent) vaccine.

Interestingly, “women who reported being vaccinated for seasonal flu were nine times more likely to be vaccinated against whooping cough compared to those not vaccinated for influenza”.

However, an awareness of vaccine campaigns was the main determinant for uptake of both vaccines, and healthcare settings were the main source of information. The researchers recommend multifaceted campaigns, with GPs central to targeting all socio-economic groups.

Study co-author Dr Jolita Mereckiene of Ireland’s Health Protection Surveillance Centre was asked what advice she would give to pregnant women in relation to immunisation in general, and flu/whooping cough in particular.

“If you’re already pregnant,” she said, “now is the best time to get a flu vaccine, which can be given at any stage of pregnancy. Whooping cough vaccine is available to all pregnant women from 16 weeks of pregnancy. GPs will provide these vaccines,” said Dr Mereckiene, adding: “You should visit your GP when your baby is two months old to begin their primary childhood immunisation schedule.”

Flu and whooping cough vaccines cannot cause influenza or whooping cough because they don’t contain live agents. Pregnant women, says Mereckiene, are at increased risk of severe complications from flu: “They’re also more likely to get complications due to changes in their heart and lung function, and more likely to be admitted to hospital and the intensive care unit due to these complications. Further, contracting influenza during pregnancy may lead to premature birth, lower birth weight and even stillbirth.”

As for whooping cough, Mereckiene points out that it’s most serious in babies less than six months of age who are too young to be vaccinated, and its complications include pneumonia and brain damage: “Many babies who are sick with pertussis have been in contact with family members who had a cough longer than two weeks. The whooping cough vaccine boosts pregnant women’s immune system and produces antibodies, which will also pass to the baby in the womb, protecting baby in the first few months of life.”

But to what extent does the current publicity around so-called anti-vaxxers – often fuelled on social media – contribute to vaccine hesitancy in general, and how might it be addressed?

The Health Service Executive, Mereckiene says, has been working for several years to respond to anti-vaccine publicity and to understand parental concerns that lead to vaccine hesitancy. This work, says Mereckiene, has been undertaken especially in relation to the human papilloma virus (HPV) vaccine, since uptake rates of this vaccine began to fall in 2015-2016 and again the following year: “As a result of significant changes in the HSE’s HPV vaccine programme, in terms of information given to parents at the time of vaccination, support from our vaccination teams and other healthcare professionals, and a very significant communications and social media campaign, the uptake of the HPV vaccine has increased from 50 per cent to 70 per cent as of April 2019. Since 2017 the campaign has been running on social media, print, radio and online.”

The HSE has also worked with Twitter on the launch of their new tool, which will proactively point people to credible health information about vaccinations when people in Ireland search for the topic on the platform. Mereckiene explains that when someone in Ireland searches for certain keywords associated with vaccinations on Twitter, they will now get a visual prompt directing them to a dedicated HSE webpage containing vaccination information. The prompt will appear at the top of an individual’s Twitter search results, ensuring it has high visibility and prominence.

Vaccination has been one of the most successful public health initiatives in the history of medicine, and as Dr Mereckiene and colleagues point out, appropriately targeted maternal immunisation of pregnant women confers direct and indirect protection on both mother and baby.