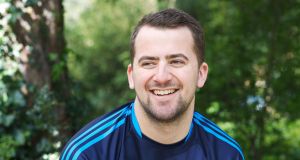 Alan O’Mara’s book “The Best is Yet to Come – A memoir about football and finding a way through the dark” will be published on September 1st.

My counsellor took a deep breath and looked at me. “Look,” he said, “I have hinted at this before, but I have never felt you were ready to take it on board before now. When did we first see each other?”

“Well, at the start, the work we did was enough to get you back living your life and back out into the world but I think we both knew there was always another level that you needed to dig down into and work through. I think that time has arrived.”

“What do you mean?” I wondered. It all sounded a bit airy-fairy.

“Okay, try this. Describe yourself to me. Who are you?”

“That’s your name, but who are you? What makes you, well, you?” said the man who had helped me work through so much.

I wasn’t sure if that was the right answer.

“That’s not what I mean. That’s what other people see. Let’s try this a different way. Give me a couple of words that best describe you as a person.”

He nodded in approval.

“Thoughtful in what way?”

“I suppose I just get on well with people. A lot of times, if people are going through something, they tend to come to me for a chat or ask for advice. I don’t go looking for it, they just tend to find me.”

“That’s good. Between now and our next visit, I want you to take some time to think about what makes you you. Who is the real Alan O’Mara?

“You don’t sound convinced,” said Niall. “Trust me. Keep a list of what words you think best define you. Make a list of the things you do or that happen to you that allow you to feel most like you. Try new things. Try going to the theatre, to a comedy gig or a festival, and don’t be afraid to challenge your friends to try new things with you. Break the habits that you’re not happy with and get out of what you think is your comfort zone.”

Habits. I thought about that word a lot when I got home that evening. For most, life is just one long line of habits really. I drove to work the same way every morning, even though there were three or four routes that all took the same time. For some reason, I drove home an entirely different way. Why? Because it was a habit!

I began to question everything I did and why I did it. As habits went, few things puzzled me as much as my relationship with alcohol. There was no denying I had used it to escape more than I should have during my college years, but it wasn’t always like that.

I’d had my first real drink at 16 years of age, when I was in my final year in school and getting ready for my Leaving Cert. Some of the students had organised a ‘Pre-Debs’, which was basically an excuse to get dressed up, drunk and forget about exam stresses.

All my friends were going but my father was adamant that I wasn’t, given that I wasn’t of age. At 16, I was the youngest person in my year by a good bit, and while others had started to hit the town regularly on a Saturday night, I had yet to join them.

It didn’t bother me at all, because I was on my first year with the county minor panel and we had training most Sunday mornings. However, this was one time I felt I needed to bow to the peer pressure and attend. In the end, Dad allowed me to go, but told me he was collecting me at 1am.

I said an early goodbye to my friends, came out to the car on time, and in good shape, and pretended as best I could to be fully sober. Over the years, my reluctance to consume alcohol had diminished, and I’d enjoyed going out as much as anyone else.

I’d probably enjoyed the new-found freedom in college a little bit too much, but that was all part of growing up and finding my feet in the world. That had all changed by the time I was in the fourth year of my degree, when depression was wreaking havoc. When I look back now, I really don’t like the person I was during that spell – particularly when I hit the beer.

At no point was I an alcoholic, but I did consistently choose to get drunk as a way to escape my own thoughts and feelings.

The Best is Yet to Come – A memoir about football and finding a way through the dark. Written by Alan O’Mara, is published on September 1st, 2016 by Hachette Books Ireland. £13.99

Walk for the Weekend: Rambling on the white sands of Inishbofin, Co Galway
6