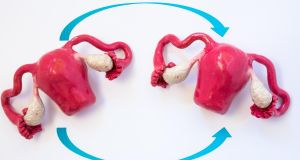 In The Whole Woman, Germaine Greer writes of surrogacy: “. . . if preparing a womb to harbour the progeny of strangers is morally acceptable to us, we must have to some extent accepted the idea of the womb’s being an impersonal container”.

The advent of uterus transplantation (UTx) may reinforce for some this notion of the womb as “an impersonal container”.

In September 2014, the first live birth following UTx was reported from Sweden by Prof Mats Brännström and colleagues. The recipient had Mayer-Rokitansky-Küster-Hauser (MRKH) syndrome – she was born without a viable womb – and the donor was a 61-year-old friend. Since then, there have been at least 12 successful births worldwide following UTx.

UTx addresses absolute uterine factor infertility (AUFI), which affects about one in 500 women, with causes including hysterectomy for malignancy or benign disease, or the congenitally acquired MRKH syndrome, affecting one in 5,000 women. The alternative for women with AUFI is adoption or surrogacy.

The UTx procedure begins with in-vitro fertilisation, using the recipient’s egg and her partner’s sperm; the subsequent embryo is frozen; a uterus – from a living or dead donor – is transplanted; the embryo is thawed and implanted; and following pregnancy and delivery by Caesarean section, a hysterectomy is performed, obviating the need for lifelong immunosuppressive therapy.

Writing in the October, 2018 issue of Current Opinion in Organ Transplantation, Prof Brännström emphasises that UTx “is still at the experimental stage and new UTx cases should be within registered trials and with data accumulated in an international registry, to collect data and results to further optimise the procedure concerning efficiency and safety”.

The “Ethical Considerations” section of the Womb Transplant UK website implies that any societal misgivings on the acceptability of UTx will be ignored: “Ultimately, the decision to go forward will depend on the judgment of the researchers, the participating institution, and most importantly, the patient to whom the transplant will be offered.”

If a transplanted uterus were to jeopardise a recipient’s life, it could be removed; but what if it contains a viable foetus? And there is debate over living versus deceased donation, with Spanish and Japanese teams favouring the Swedish “live” model, and French, Belgian and UK researchers preferring deceased donors. Writing in the journal Bioethics, Dr Nicola Williams cites the view of the International Federation of Gynaecology and Obstetrics that “the retrieval of a uterus from a living donor necessitates a relatively major surgery with its own risk of complications [and] constitutes reason enough to deem the procedure ethically inappropriate”.

Also, how much would a child be entitled to know about the donor from whose uterus he or she issued, and – irrespective of whether the donor had been dead or alive – would the infant be the child of the donor or the recipient?

Given the fact of adoption showing that one can mother and love a child without having given birth to it, Lisa Belkin, writing in the Huffington Post entitles her piece, Giving Birth With A Borrowed Womb Is Not What Makes You A Mother, and wonders if UTx is worth the abdominal surgeries in each donor-recipient pair, the subsequent Caesarean section, and finally, the surgery to remove the uterus after birth.

Further, at a time when gender identity is hotly debated, it is conceivable that men who have undergone sex reassignment surgery might contemplate UTx. When philosopher Prof Timothy F Murphy considered this in the journal Bioethics, he argued not only that “social meanings of sexed bodies do not remain constant”, but that if transgender women are conferred the same moral status as women, “[i]t is not simply ‘frivolous’ for transwomen to assert any interest in gestation. Gestation can play a key role in expressing and consolidating a female identity.”

Countering this is Germaine Greer’s (to me convincing) view in The Whole Woman that “women should not automatically accept all those who do not wish to be male as being ex-gratia females”, asserting that “if uterus-and-ovaries transplants were made mandatory for wannabe women they would disappear overnight”.

Do women who lack a uterus have a right to a Utx? My understanding is that a right can only be conferred by law, which in turn derives from an established moral principle.

But to what extent can a moral principle be derived from a “need” or a “want”?

I ask this because of a question on the wombtransplantuk.org website asking: “Why The Need For Womb Transplants?” Is a no-doubt genuine want for a child the same as a need? It is an important distinction since many basic needs that we share – water, nutrition, shelter etc – often generate a right. The risk of not distinguishing a want from a need is that those women lacking a womb may assert a right to a UTx when what they have is a sincerely-held want. In my view, eliding the terms “want” and “need” adds confusion to a debate that needs clarity.

But where cutting-edge medical science is concerned, medical scientists often pay lip service to the question of ethics, leaving society to pick up the pieces.

Share your DIY projects: What home improvements have you done in lockdown?
9