Lena Dunham says she had hysterectomy after endometriosis

‘With pain like this, I will never be able to be anyone’s mother’ 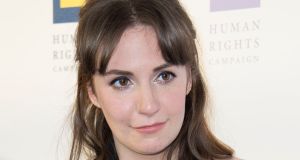 The actress and writer Lena Dunham said in an essay published this week that she had a hysterectomy last autumn at age 31 after living for many years with endometriosis, a painful medical condition that affects the lining of the uterus.

In the essay, in the March issue of Vogue, the 31-year-old chronicled her decade-long struggle with the disease, her efforts to manage it without surgery and the choice she made to have her uterus removed after the pain left her “delirious”.

“With pain like this, I will never be able to be anyone’s mother,” she wrote. “Even if I could get pregnant, there’s nothing I can offer.”

But the difficulty of making that decision was compounded by the reluctance of her medical providers to perform the procedure on a woman her age, she said. “They don’t contemplate this request lightly, doctors,” she wrote. “Medical-malpractice suits are real, and women are attached to their uteruses (for me, an almost blind, delusional loyalty, like I’d have to a bad boyfriend).”

Because of the nature of the procedure, the creator, writer, star and sometimes director of the HBO series Girls said her doctor required “evidence he’s operating on someone resolved enough to give consent and never take it back”. That meant she had to sit through consultations with two therapists, one of whom was recommended by her doctor, while she managed extreme chronic pain, she said.

The procedure can be performed on younger women in response to maladies like uterine fibroids, cancer or endometriosis, a condition in which the tissue that normally lines the inside of the uterus grows on the outside of it, sometimes on organs like the bladder or the bowel, according to the National Institute of Child Health and Human Development in America.

Holly Brockwell, a British technology writer, said she had tried several times to obtain a hysterectomy in Britain from age 26 to 29, but her efforts were stymied by doctors who expressed disbelief in her decision that she did not want to bear children. On more than one occasion, she said, doctors called her “selfish”.

Dunham said in Vogue that she does want children. She described her lifelong dreams of motherhood and the period of “mourning” during which she confronted the reality that a hysterectomy would make her unable to carry a child. But she said doctors believed the operation, which did not remove her ovaries, may not have rendered her infertile.

“Your brain, unaware that the rest of the apparatus has gone, in theory keeps firing up your eggs every month,” she wrote.

“Adoption is a thrilling truth I’ll pursue with all my might. But I wanted that stomach. I wanted to know what nine months of complete togetherness could feel like.”

London Fashion Week: Paul Costelloe back in form with a little help from his son
7

Where are the best value lunch spots in Ireland?
10 Life after an ectopic pregnancy
Real news has value SUBSCRIBE