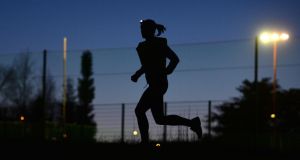 Niamh O’Gorman who organises group runs in the dark in the Phoenix Park. Photograph: Alan Betson

When you imagine winter running you think of it being cold, and wet, and dark and miserable. Sure it is always dark, and mostly cold and often wet. But the funny thing is that once you start running regularly in the dark it is seldom miserable.

In fact, running at night during the winter can be an amazing experience, and it has been helped by advances in technology, both in terms of apparel as well as lightweight head-torches, flashing armbands and high-visibility vests and strips. Running gear, especially lightweight soft and hard shell jackets, leggings, hats and gloves ensure comfort on even the coldest and wettest night.

For one, the atmosphere at night is so different. There is less traffic and there is a general sense of quietness and serenity even in the heart of bigger towns and cities. If the night is clear, you get great vistas. If I’m running in the Phoenix Park as I often do, you get great views of the city lights stretching down to the Dublin mountains, or you can see the jets make their even passage across the sky towards Dublin Airport, or glance at the great constellations in the sky such as the Plough in the North or Orion to the south east.

Even in the wet, the lines of rain caught in the light-pool of your head-torch can be beautiful enough to make up for the puddles and the damp. There is a sense too that because your view of the landscape is blinkered you can concentrate more on your running and breathing techniques without too many visual distractions.

And it is no longer a minority interest. If you drive through the Phoenix Park in Dublin, you can see the tell-tale necklace of flashing red armbands, the yellow vests, and white pools of light from head-torches as groups of runners, and individuals, run along the long straight stretches. The same scene is repeated in suburbs and parks, streets, towns and villages.

Of course safety is a much bigger consideration in the dark, from traffic to the running surface, but also personal safety. There is a large range of head-torches available nowadays (some companies like Ronson even manufacture caps with a powerful tiny LED torch inserted in its peak). There is also a wide variety of high-visibility vests (many specifically designed for runners, being feather-light and meshed) as well as flashing armbands.

Runners still need to be vigilant of traffic so listening to music on headphones is not recommended. For women (and also for men) it is better to run in a group for personal safety and to stick to routes that are obviously familiar, and not dodgy.

For some people, early morning running or lunchtime running are not options so they have little choice but to run in the dark. Trainer and sports therapist Niamh O’Gorman, for example, organises running courses for women in the Phoenix Park, called Girls on the Run, which take place in the dark in the winter.

She points to a number of attractions of running in the dark. “They include quieter roads depending on the time, so less standing around at traffic lights and competing for space on the footpath.

“As it tends to be quieter later in the evening or early in the morning it is definitely a more peaceful time to run, so if you are used to running in parks to get away from traffic then running early or late is a good option,” she says.

Some runners feel self-conscious about being stared at and O’Gorman points out it’s not a factor at night. “Psychologically, although people are wearing high vis, they will feel less conspicuous and recognisable in the dark and maybe more comfortable.”

When she started her course, she was surprised at how many people ran in the Phoenix Park at night. “The walking paths are uneven and the lighting extremely bad. Many people don’t have head torches. I’ve done a good few night time trail runs, with friends, on routes I was familiar with and usually find if you have a good enough head torch and there is a group running close together it is sufficient light but when the girls in my groups tried to run with head torches in the park they found it disorientating and their pace dropped.”

She says the downsides include “uneven ground or not spotting icy patches and the safety aspect, but I think it’s the same with all training sessions, once you are out you’re glad you went.

“Night time road and trail races are becoming more popular at the moment which is a great idea in a country which has such short days in the winter,” she adds.

She believes it is better to run with others than alone. “If you are running late in quiet or unfamiliar areas, it is preferable to run with a friend or a group. This is not only for safety reasons but also for motivational reasons. You are much more likely to go running on a cold wet night if you have a commitment to meet someone and may feel more confident when in a group.”

There are different opinions about the best time of the day to run. According to O’Gorman there is an argument from a physiological perspective that the potential for injury due to cold and stiff muscles is less in the evening as the body has been active during the day. The core temperature of the body will be higher in the evening than first thing in the morning.

For night running enthusiasts there are plenty of events. There is a winter trail race on Thursday in Stormont Estate, Belfast, and there is the Samsung Night Run in April in Dublin city centre. There is also the annual Run in the Dark race for the Mark Pollack Trust in various cities in November and the ultra-distance Art O’Neill Challenge in January.


Niamh O’Gorman runs Girls on the Run, group running courses for women in the Phoenix Park. She can be contacted at niamhogsportstherapy@gmail.com