It’s easy to find excuses not to go running: putting the gear on and getting out the door is the hardest part 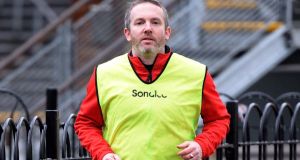 It is well into week three as I write this, but it feels terribly like week two. Why? It is because, as the end of the week approaches, I have just completed last week’s schedule. Now I must cram in three workouts between Friday and Sunday if I am to keep up.

Okay, let’s get the excuses out of the way. I had a bad cold. It was wet and stormy outside on several occasions. I travel quite a long distance to work every day, leaving the house at 7.30am and arriving home close to 8pm every night. Then the kids need to see their Dad and I need to get to bed to do it all over again the next day. In short, I struggle to find the time. But, cards on the table, I have deployed some lame excuses too.

Also, to be honest, running doesn’t come naturally to me, and it is not something I enjoy. At least, not yet. Running was something I did a lot as a small child (chase games, football), then sporadically through my 20s (running for busses and the like) and then again when I tried to join a gym some time in 2004. That didn’t go too well. During one of my first training sessions I ran like Forest Gump on a treadmill for about half an hour, pressed stop and proceeded to fall around the place with dizziness. Much hilarity ensued amongst the assembled Eastern European body builders.

So joining the Get Running programme came with some trepidation, while trying not to think too much about the task ahead.

The first workout was against a dark, icy January backdrop. I had had a typical hard day in the office and felt more like cracking open a bottle of wine (it was Monday after all) and bingeing on some box set or other.

However, I had announced to the office that I was taking part, so off I set. It was more difficult than I had thought. The pressure on my ankles and other joints was a feature immediately. The second day was on my 39th birthday, an event that helped put health and fitness into sharp focus for me.

However, this felt a little easier in terms of strain on joints and overall ability to keep the pace. I also started day two better prepared with a decent interval app that announced when I should start running and when I should begin to amble.

I had decided to run on footpaths in Drogheda town centre, rather than the roads around Termonfeckin as my first two escapades were at nine at night. By the third day of week one I was able to run more confidently and push myself a little more. In week two a day off allowed me to go for my first day-time run, something I continued for the other two sessions. The workouts were beginning to show in terms of shortness of breath, but the ill-affects on the ankles experienced the previous week were reduced. By the end of my sixth workout, I felt I was getting the hang of it.

So what have I learned so far? I have come to the conclusion that running is a bit like giving up smoking, a challenge I took on many times over the last 15 years or so, and finally cracked it a couple of years back. With smoking, I found that if I told myself I would never smoke again, I would fail instantly, so daunting was the prospect. One minute, one hour, one day at a time worked better. With running, setting the goal of running a marathon by the end of the year will surely send me back to the couch with Netflix and a cheeky little Syrah. So it’s a little bit at a time. If I can motivate myself to simply get my gear on, set the phone app and go out the door then I have done the hard bit.

Will I continue with the programme? Yes, I think I will. Will I become an obsessive long-distance runner? I wouldn’t bet the house on it.