‘My advanced child’ syndrome, and other parenting pitfalls

Can my newborn smile? Of course. Vomit out his nostrils? You betcha 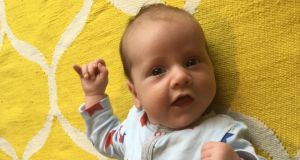 Smile: by the time I have picked the best snap, cropped it, and shared it, the now-ignored Louis is weeping

After 40 tumultuous days and 40 hazy nights it finally happens: my newborn responds with more than a bawl. He looks right at me with a smile and a coo, as if awoken from an anaesthetic. (And, no, he doesn’t have wind.)

Do I savour this once-in-a-lifetime moment? Kind of. I reach for my phone to capture it, thus falling for one of the pitfalls of a modern parent: the urge to overshare. I fumble, open my camera and miss the moment. I have looked away from his blue-eyed gaze.

I photograph one of his smiles two days later and immediately share this “perfect” moment with various WhatsApp groups. (By the time I have picked the best snap, cropped it, and sent it with a message, the now-ignored Louis is weeping.)

Perhaps new-parent exhaustion fuels the drive to share; each reaction is like a drop of espresso to my sleep-addled brain as my friends and family run out of adjectives and emojis to politely respond to yet another photo: “aw cute”, “ ah lovely”, “oh bless”.

I receive the notification with more panic than I would a Hawaiian emergency alert, as it predicts on which dates my baby will be even more fussy than usual

Of course, this smile is not only expected but has been repeatedly anticipated by his eager Mammy since he started this developmental stage, 10 days ago. The poor boy must have tired of this enthusiastic woman grinning down at him. “C’mon, Louis. Hello . . . hiya” (blows raspberries).

When Louis is due to enter a new stage of his mental development I get an alert on my phone from the Wonder Weeks app. It is drawn from research that groups babies’ mental progress into various “leaps”. I receive the notification with more panic than I would a Hawaiian emergency alert, as it predicts on which dates my baby will be even more fussy than usual (also known as the days I wish I were an eight-armed octopus).

But the app also tells me which new skills my baby will master in this period. Even though it warns me, repeatedly, that these may take weeks to show . . . well, I’m a weak (and slightly bored) human. So when the app says my baby’s going to smile soon, I can’t help but “encourage it”.

I usually catch myself being the pushy parent I don’t want to be, however. He will be categorised and scored for most of his life. I tell myself that I need to just let Louis be a baby (but I’ll secretly know he’s the most advanced baby ever, who will some day be president – not the Trump type, though).

I type ‘Is it normal for baby to vomit out . . .’ I breathe a sigh of reassurance as Google fills in the rest of my question. Someone else has experienced this before

Louis masters another skill this week, which for some reason I don’t post to WhatsApp and isn’t in his developmental list. He vomits out his nostrils. White gloop. Muslin cloth in one hand, I reach for my phone in panic with the other. This time it’s for Google. I type “Is it normal for baby to vomit out . . .” I breathe a sigh of reassurance as Google fills in the rest of my question. Someone else has experienced this before.

I click the first result (of the seven million), the one that tells me it’s perfectly normal. But the third result is a forum post from a similarly concerned mother; someone explains how to stop her child choking from this. Choking! I cower. Despite knowing this “expert” is just another “helpful” but clueless parent, seeing it in black and white induces fear.

This is yet another pitfall of modern parenting: “fake news”, or endless amounts of dubious information from questionable sources. It also means parents can find “information” to back up anything they want to believe. Unproven remedies for colic or teething? You betcha. False reasons not to give vaccines? In spades (and, to my surprise, on the first page of search results).

But, just sometimes, this post-truth world can offer a glimmer of hope. It’s 4am on night 42. I’ve just done my second feed since “going to sleep”. My baby’s face is lit up by my phone. “When does baby sleep through the night?” I type.

This is fake news I need to believe.