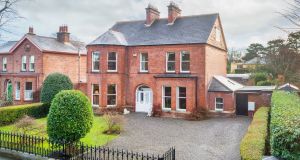 17 Temple Gardens in Rathmines sold for €3.5 million, a 22 per cent discount on its original asking a year earlier of €4.5 million.

All of this points to an affordability issue for buyers, and a gradual market realisation that prices need to be adjusted accordingly. Add to this fears over Brexit and Central Bank mortgage lending restrictions and the slow 2 per cent growth in number of mortgage drawdowns in the first quarter begins to make sense. Compare this with growth rates in 2018 of about 20 per cent.

Meanwhile, the throughput of housing stock for sale is strong. “June and July have been unseasonably strong with the flow of stock coming through,” said Angela Keegan, managing director of property website MyHome.ie. “It’s possible people are more confident about the market because, remember, if they are selling they are buying too. We know interest rates are not going up in the near term and there are excellent fixed-rate mortgages available too.”

There is, however, greater uncertainty around asking prices; in the first two quarters of 2019, MyHome.ie recorded twice as many price drops as price increases in Dublin. “When looked at in their entirety the price changes aren’t huge, averaging around 1 per cent,” Keegan says, “but they reflect the gap between sellers’ starting optimism and buyer restrictions linked to the Central Bank lending requirements.”

Certainly at the premium end of the market there has been a distinct reality check between prices sought and actual sale prices in traditionally sought-after locations. Take Saintbury House on Killiney Hill, with fine sea views and provenance as the one time home of actress Maureen O’Sullivan, it was placed on the market in 2016 seeking €2.95 million and only sold in recent months when it was picked up by Hibernia Reit chief executive Kevin Nowlan for €2.275 million – 23 per cent below the original asking price.

Not far away, Montebello, a splendid old 8,000sq ft Victorian on nearly four acres of private grounds, was placed on the market nearly two years ago seeking €9 million, but was quietly removed from the market before summer – unsold. Similarly, St Georges on Georges Avenue – a most unusual gothic revival arts and crafts extravaganza on more than an acre – was launched seeking a heady €9.25 million last year and has since been removed from the listings while the vendors “reassess”.

Closer to town in Dartry, where record-breaking sales have been a staple in recent years, the secluded enclave saw a number of recent sales fall well below the mark. Number 29 Temple Road sold for €4.8 million a year after it launched seeking €5.75 million – a 17 per cent reduction. Then 17 Temple Gardens in Rathmines sold for €3.5 million, a 22 per cent discount on its original asking a year earlier of €4.5 million. Nearby Hadleigh, at 42E Palmerston Road, took three years to sell and finally went for 19 per cent below its €3.25 million asking price for €2.65 million.

According to Sherry FitzGerald selling agent Rena O’Kelly: “Deals are certainly taking longer to close, in particular where work is required on the property. The cost of renovations and labour have shot up. What might have been an additional refurb cost of €500,000 has soared to between €750,000 and €1 million.”

While the price drops on MyHome.ie are averaging only about 1 per cent, higher-end properties appear more susceptible to larger discounts. Take number 10 Mount Street Crescent, a fine Georgian opposite the Pepper Canister Church in Dublin 2 which launched in March 2018 seeking €2.3 million and has lately been reduced to €1.8 million.

Uncertainty around Brexit has put the brakes on sales, according to one agent who is seeing far more price-conscious relocators from the UK impacted by lower sale prices for their own properties over there and who are stuck on the wrong side of the exchange rate. When they buy they want “turnkey” properties that require no additional investment.

But Peter Kenny, selling agent with Knight Frank, sees this as temporary, and anticipates much stronger activity post-Brexit: “There is no doubt once the Brexit uncertainty passes – one way or the other – we will see a lot more activity in the Dublin market. We’re already seeing activity as companies move operations here. Ireland is a small market, so any influx of extra investment in property makes a big difference.”