Fire in their bellies: Ireland’s 14 top young chefs are revealed 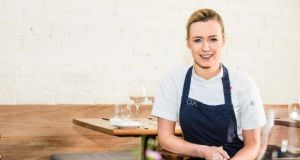 Grainne Mullins, formerly of Ox in Belfast and now part of the launch team for Lignum, opening in Bullaun, near Loughrea, Co Galway, at the end of next month, is one of 14 chefs to reach the Euro-Toques Young Chef 2019 semi-final.

French chef, restaurateur and TV presenter Michel Roux junior of London’s Le Gavroche restaurant, and Dutch-born, South African-based chef and campaigner Margot Janse have been announced as the judges for the final round of the Euro-Toques Ireland Young Chef of the Year 2019 competition, which will take place in Dublin in November.

The competition, run in association with La Rousse Foods, is open to chefs between the ages of 18 and 26. On Wednesday, the names of the 14 young chefs who have made it through to this year’s semi-final – a technical skills and mystery ingredient cooking challenge – were revealed.

The shortlist includes three who made it to the final of the 2018 competition, all of whom are now working at Michelin-starred restaurants. They are Michael Morrisroe, previously at The Strawberry Tree and now in the kitchen at Ireland’s only Michelin two-star, Restaurant Patrick Guilbaud; Matt Stafford, formerly at Sage in Midleton and now part of the team at The Greenhouse in Dublin 2, and Atilla Galambo, from Aniar restaurant in Galway.

There are three women chefs included in the line-up, including pastry chef Grainne Mullins, who worked at a Michelin two-star in the south of France before returning to Ireland to take up a position at at Ox in Belfast, and is now part of the set up team for a new restaurant, Lignum, opening in Bullaun, near Loughrea in Co Galway next month. Niamh Barry, from Ashford Castle in Co Mayo, and Alison Tierney from Dax in Dublin 2, are also among the semi-finalists.

The line-up also includes Karan Mittal, who is already working at head chef level, having been headhunted by Dublin restaurateur Asheesh Dewan to lead the kitchen team at Ananda in Dundrum, Dublin 14, in 2017. Mittal, who is originally from Delhi, previously worked there, and in the US.

There are two other semi-finalists from Michelin-starred establishments in the line-up – Michael Jones, who works alongside Takashi Miyazake at Japanese restaurant Ichigo Ichie in Cork city, and Brian Hennessy, part of Gareth Byrne’s team at Campagne in Kilkenny city.

The shortlist also includes James Dobson from Potager in Skerries; Ronan Hallinan from West @ The Twelve in Barna; Gareth O’Brien from Bastible in Dublin 7; Mark Winter from Lough Erne Resort in Co Fermanagh, and Dan Hannigan, who is under the mentorship of Damien Grey, head chef at Liath in Blackrock, Co Dublin, having moved on from Richmond restaurant in Dublin 2. He will take up a head chef position at a new  restaurant on Camden Street in Dublin, to be called Mr S.

The judges for the next round of the competition, which will take place at Dublin Cookery School in Blackrock, Co Dublin on August 11th, are Gareth Mullins of The Marker Hotel in Dublin, London-based Irish chefs Anna Haugh and Shauna Froydenlund, and Jordan Bailey of Aimsir restaurant.

Last year’s winner, Jack Lenards, won a trip to South Africa where he worked with Irish-born Liam Tomlin, who is now one of South Africa’s best known chefs and restaurateurs. In January he travelled to Capetown and to Singita Lebombo Lodge in Kruger National Park, to work with Tomlin.

The shoe trends to step into this spring
2

Could a keto diet be bad for athletes’ bones?
Real news has value SUBSCRIBE